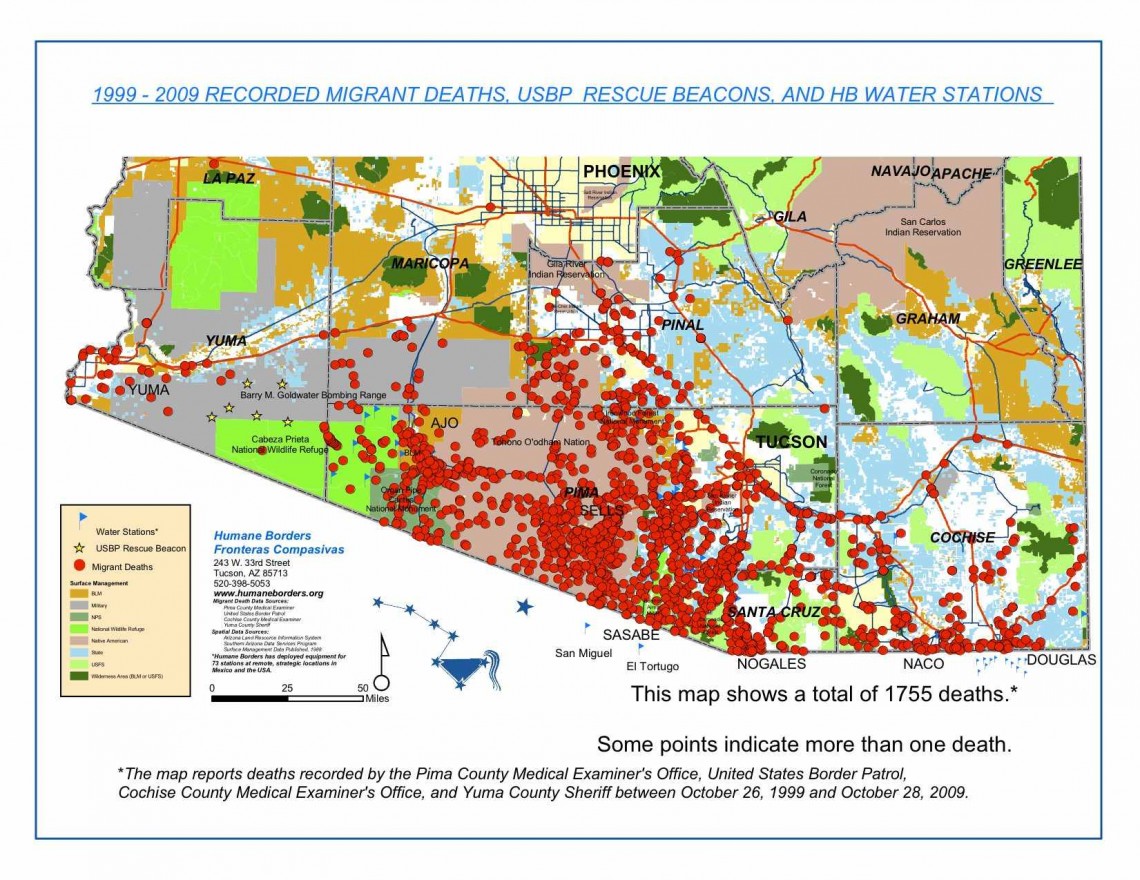 6:15 a.m.: I pull up to the Southside Presbyterian Church in Tucson. A dozen Latino men are waiting for work out front. One of them flags me, mistaking me for someone with a job to offer. I drive past him, into the parking lot where two women in broad-brimmed hats are loading water and Ziploc bags of food — beef jerky, applesauce, peanuts — into the back of a van. They are volunteers with the Samaritans Patrol, started by the church in 2002 to keep migrants from dying in the desert. Every day, the group takes food, water and medicine into remote back roads, on the lookout for migrants in need. In the last decade, 1786 illegal immigrants have died in Arizona's four border counties while crossing into America, most of them from dehydration or heat-related problems. The decade before that, before the U.S. government shut down safer crossings in Texas and California, forcing migrants into the no-man's lands here, there were only a handful of migrant deaths in the state every year.

6:45 a.m.: The Samaritans — this morning, they are independent filmmaker Kathryn Ferguson and nurse Susan Syracuse — head south on Highway 19, into the shriveled, prickly heart of the Sonoran Desert. (Literally, it shrivels up. The Saguaro cactus loses half its circumference in the summer.) Humane Borders, another organization devoted to stopping migrant deaths, has compiled data from county coroners and the U.S. Border Patrol that show that the territory we're heading toward is also the heart of death. Most migrants die on the Tohono O'odham Nation, the Indian reservation a half-hour's drive to the west, and around the old mining town of Arivaca, our destination today. The migrants walk four days to pickup points outside Phoenix and near a copper mine at the edge of Tucson. Recently, Samaritans have noticed piles of discarded bicycles near the pickup spots. They believe the Tohono Indians are selling the bikes to migrants trekking through the reservation.

7:25 a.m.: On the curving road to Arivaca, we pass a U.S. Border Patrol checkpoint. The Samaritans sign on the side of the van — white cross, against a red field — announces who we are. An agent in sunglasses waves at us. Kathryn waves back. It seems like a friendly exchange. I imagine they know each other and perhaps even see each other as allies on the same hard terrain. The truth is more complicated. Kathryn doesn't know him; agents are rotated in and out every six weeks. And she says they often don't support the Samaritans. The group's mission is delicate, requiring precise negotiation with the U.S. Border Patrol, so that volunteers don't cross the line between humanitarian outreach and aiding and abetting illegal immigrants.

Southside Presbyterian has walked this line before. It's where the sanctuary movement that provided safe havens to Central Americans fleeing death squads started in the 1980s. The church's pastor emeritus, Rev. John Fife, was at the forefront. For that role, he was convicted on smuggling charges and was sentenced to probation. Fife co-founded Samaritans Patrol. The group meets regularly with the Border Patrol chief for the Tucson sector to determine what volunteers can and can't do. They can't transport anyone anywhere, even to a hospital, without inviting charges of smuggling. Three volunteers were once arrested for taking a wounded migrant to the hospital. (A federal judge ultimately dismissed the case.) The Samaritans had to stop including tins of Vienna sausages in their food packets; the Border Patrol argued the pop-up lids could be used as weapons. Tuna in tins is also contraband. Agents have even told volunteers that they can't give water to migrants in the presence of Border Patrol, because they could sue the U.S. government if they choked.

7:50 a.m.: We drive through the main artery of tiny Arivaca (Population: 2,000), and Kathryn is astonished to find that a taqueria that her Mexican-American friend, Virginia, runs from a cart under an awning in her front yard, is no longer there. Her neighbor, an Anglo man who owns the house, suspiciously eyes the Samaritans' van. Last week, he called Border Patrol to report a young Guatemalan who had wandered into the taqueria. The young man, in clean clothes that belied a desert's walk but emaciated, was crossing illegally. Border Patrol detained him. “I'm totally freaked out,” Kathryn says now. “She's gone. She lived in this house.” A few moments later, we find Virginia displaced across the street. Her neighbor had forced her out of her house because of the migrant. She now lives in a trailer home.

9:20 a.m.: Looking for a trail Kathryn wants to explore, six miles from Mexico, we see a green van for the second time on the unpaved Warsaw Canyon Road. Its owner smiles, nods his head. There's no license plate at the front of the van. Kathryn and Sue wonder who he is. He could be a Minuteman. He could be a rancher. He could be picking up migrants from acoyote. The rocky, mesquite-laden terrain is tough to navigate. Its trails are, Kathryn says, “like cobwebs which go every which way.” Its various cacti shoot out needles as well as flowers. But the man could still be a hiker, courting prickly beauty. Kathryn notes the shovel in the back of his van. “He's buried his wife,” Sue jokes. “Maybe he's a geologist,” Kathryn says.

11:50 a.m.: After hiking in search of migrants, and finding none, we head back toward Arivaca. On the way, we run into the man in the green van again. He's parked at the side of the road, his van open to reveal a cooler. This time, Kathryn stops, rolls down her window and says hello. “Can we help you,” she asks. His face is red from the sun. His blue eyes peer out from under a floppy hat. He looks as if he'd like to know who we are. “I'm fine, thanks,” he says. It turns out he's prospecting for gold. He's an out-of-work carpenter who spent his last dollars on prospecting equipment. He's been at it for months, undaunted. “There's gold out here,” he says. “Definitely.” It's just too dry to pan for it. He hasn't seen any migrants while digging. “I wouldn't blame them if I did see them,” he says. “Hell, I might need to go down there someday.” He used to see migrants often at Three Points, a town close to where he lives and a well-known pickup spot. Locals used to call them in to Border Patrol frequently. He tells us sightings have slowed to a trickle, nearly as rare as the water he needs to pan for his gold. He only spots people he thinks are illegal immigrants about once a month now. Kathryn has also encountered fewer migrants in the last two years. This is Sue's fifth trip out, and she hasn't come across a single migrant yet. The Border Patrol has also arrested fewer migrants in the last two years. The Samaritans believe that, despite the anti-immigrant far right's rhetoric, which suggests that the U.S. is under invasion like never before, there are far fewer migrants crossing the border.

1:15 p.m.: On the way to the border wall at Sasabe, we see some trash at the side of the road. The Samaritans pull over to take a look. The desert is littered with belongings that migrants have left behind or lost: pictures of the Virgin of Guadalupe, Bibles, backpacks, clothes, Red Bull cans and bottles of water and Electrolit (a Gatorade-like drink made in Mexico). The clothes are always dark, and the bottles painted black to elude the Border Patrol's notice at night. The migrants move by night. At the side of the road, someone has abandoned a bag of tortillas, a can of tuna, hot sauce, a medium navy blue sweatshirt, a bottle of Electolit and two pairs of socks — one dirty, one clean, as if someone was in the middle of changing them when startled. There is also a black, half-gallon bottle ofSahuaro drinking water. Its label in Spanish features a drawing of the Sonoran cactus it gets its name from. Kathryn has recently seen more bottles manufactured black, so that migrants don't have to paint them.

Kathryn and Sue push into the scrub to see if anyone might still be there. Somos amigos, Kathryn calls out. Tenemos agua, comida, medicina. (We're friends. We have water, food, medicine.) No reply. We continue walking and calling out for a few minutes, until finally she shouts: Llamanos. Vamos a salir. (Call out to us now. We're about to leave.) And we do.

“Whatever it was, it happened fast,” Kathryn says.

And it probably wasn't an apprehension by Border Patrol, or the food and clothes would not still be lying on the ground. It's unusual for migrants to show themselves on the road during the day, so whatever or whoever scared the migrant, did so before dawn.

1:40 p.m.: We're back on the road when Sue notices a half dozen black hawks swooping up and down in a circle. “Look at all those birds,” she says. “Do you think that's anything?”

Kathryn says that we need to check it out. Sue protests, pointing out there's a barbed wire fence separating us from whatever the birds are circling. “We'll go under it,” Kathryn says, but tells me I can stay behind if I want to. Then I finally understand: they think there might be a dead body out there.

There is — but thankfully, it's only a deer that the hawks have picked nearly clean.

The migrant bodies that make it to coroners' autopsy rooms are more and more just skeletal remains, says anthropologist John Chamblee, who analyzed the data on deaths for Humane Borders. Increasingly, they are also found further and further from roads. This all suggests “a growing risk environment,” Chamblee later told me.

3:30 p.m.: We get back to Tucson, without having encountered a single migrant. Kathryn, of course, has encountered many in her seven years as a Samaritans volunteer. Their stories, many of them heartbreaking, are told in a graceful book published by the University of Arizona Press and authored by Kathryn and two other Samaritans volunteers, Norma A. Price and Ted Parks. It's called Crossing with the Virgin: Stories from the Migrant Trail.

Gaiutra Bahadur is reporting on the anti-immigrant far right for The Nation Institute.

Gaiutra Bahadur is a Guyanese-American writer.