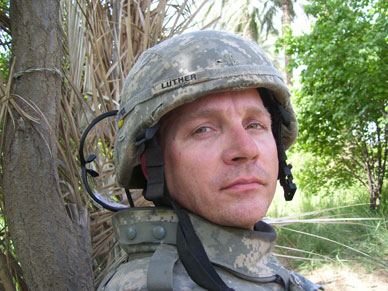 Joshua Kors, an Investigative Fund reporter whose most recent article, “Disposable Soldiers,”was published in The Nation in April 2010, testified before the House Committee on Veterans' Affairs this morning. Also testifying was Sgt. Chuck Luther, the “disposable soldier” in Kors' article, who described how he was tortured for more than a month by being confined in an aid station the size of a walk-in closet, while he was at Camp Taji in Iraq. There, he was pressured to sign paperwork admitting that the symptoms that appeared after he had suffered a mortar attack were actually the result of a mental illness called personality disorder.

Luther is simply the latest casualty of a years-long pattern uncovered by Kors in previousNation articles (see here and here) — one in which the army wilfully misdiagnosing soldiers' post-combat symptoms as personality disorder, “a severe mental illness that emerges during childhood and is listed in military regulations as a pre-existing condition, not a result of combat,” Kors explains in his article. “Thus those who are discharged with PD are denied a lifetime of disability benefits, which the military is required to provide to soldiers wounded during service. Soldiers discharged with PD are also denied long-term medical care. And they have to give back a slice of their re-enlistment bonus.” According to figures from the Pentagon and a Harvard study, the military is saving billions of dollars on medical benefits by misdiagnosing its soliders this way.

In 2007, then-Senator Barack Obama drafted a bill that would stop all personality disorder discharges. Sadly, it was never passed. Then President Bush signed a law that required the defense secretary to investigate the PD discharge system. But the Defense Department said that none of the soldiers had been wrongly discharged. And the wrongful PD diagnoses have continued. According to Kors' latest article, “since 2001 more than 22,600 soldiers have been discharged with personality disorder. That number includes soldiers who have served two and three tours in Iraq and Afghanistan.”

Also see this recent BBC interview with Luther and Kors for more information.