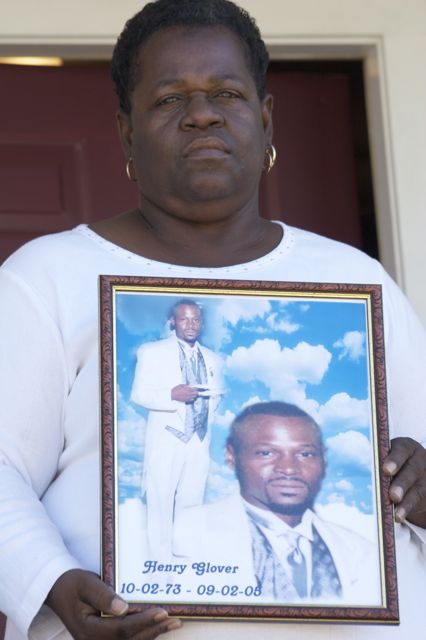 Edna Glover holds a portrait of her son, Henry Glover, whose remains were found behind a police station. | Credit: CHANDRA McCORMICK AND KEITH CALHOUN

A federal jury tonight [December 9] convicted three current or former New Orleans police officers in connection with the death of Henry Glover, a 31-year old man who was shot by a police officer and died in custody shortly after Hurricane Katrina tore through Louisiana in 2005.

The circumstances of Glover's death were first disclosed more than two years ago in a story published by ProPublica and The Nation magazine. [That investigation was directed and underwritten by The Investigative Fund at The Nation Institute.] That story prompted a federal civil rights investigation and drew attention to the conduct of the New Orleans Police Department in the chaotic days after Katrina and the subsequent flooding ravaged the city.

Two other police officials, Lt. Dwayne Scheuermann and former Lt. Robert Italiano, were acquitted of all charges against them. Scheuermann had been accused of participating in the burning Glover's body and beating the men who sought to rescue him after he was shot. Italiano had been indicted for trying to cover-up the crimes.

While the jury had the option of convicting Warren of murder, they opted for manslaughter, a lesser charge. Warren testified that he'd shot Glover near a strip mall in the Algiers section of New Orleans because he felt menaced and feared for his life.

Glover, who was unarmed, was trying to pick up a suitcase of stolen house goods left near the mall when Warren hit him with a single shot from a .223 caliber assault rile. Warren was guarding a police substation located in the second story of a mall when he spotted Glover and shot him.

After the Sept. 2, 2005 shooting, Glover's brother, Edward King, and two passers-by took the injured man to a nearby school, where members of a police SWAT team had set up a temporary headquarters. The three men said they were greeted with immediate hostility when they arrived at the school, and that the officers there beat them and allowed Glover to bleed to death.

Officer McRae, a SWAT team officer who was working a short distance away when the shooting occurred, told the jury he took Glover’s body to the banks of the Mississippi River and set it afire in a car owned by one of the men who had stopped to help Glover. He said he felt remorseful for his actions, which he said had been prompted by the stress of the Katrina disaster. McRae was also convicted of obstructing justice and civil rights charges.

Scheuermann, who accompanied McRae as he moved Glover's body, was acquitted of charges that he beat the men who brought Glover to the school and of burning the body. He said McRae set the corpse ablaze on his own.

Prosecutors asserted that McCabe and Italiano entered the picture later, and sought to cover-up the grisly incident. McCabe was found guilty of authoring a false police report about the shooting, lying to federal agents, and perjury. Italiano was acquitted.