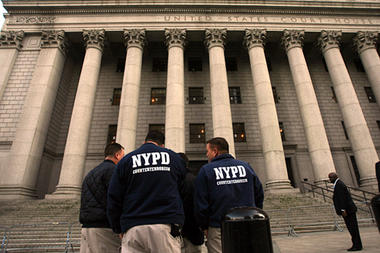 They teach that Muslim terrorists can be spotted by the “cone shape” of their beards, that Islam is a “violent radical religion,” and that the Prophet Muhammad was “a pedophile, a serial killer, a rapist.” Stray comments from ignorant talk radio hosts? No — these are examples of the lessons being taught to America's sheriffs and police officers by self-styled counter-terrorism “experts,” paid for by the U.S. government.

In a recent Investigative Fund probe, reported in partnership with the Washington Monthly, Meg Stalcup and Joshua Craze reveal how Washington is spending billions of dollars in grants to teach local law enforcement how to sniff out and respond to terrorists, but with little supervision over who provides the instruction or what's being taught. The result could be dangerous: ill-trained cops sleuthing around for “jihadis” could engage in illegal forms of racial and religious profiling, alienate Muslim communities, and dry up the community tips essential for many successful counter-terrorism efforts.

The investigation has already had enormous impact — picked as a “must read” by the likes ofMother Jones, The American Prospect, Foreign Policy, and CFR.org, it sparked The Council on American-Islamic Relations to issue a public statement seeking oversight of anti-Islam bias in law enforcement training.

Then, in a followup story on TPM Muckraker, the director of the federal COPS program predicted that the investigation would trigger a review of how instructors and curricula are vetted. As TPM reports:

One of the offices that gives out federal funds for some counterterrorism training is the Justice Department's Office of Community Oriented Policing Services (COPS). In an interview with TPM at his office in D.C. last week, COPS director Bernard Melekian said that the mechanisms for screening how the federal funds being sent to local police vary from office to office.

Melekian, who was the police chief for the City of Pasadena, Calif. for over 13 years before he was appointed to the COPS office by President Barack Obama in 2009, said that maintaining a close working relationship with Muslim communities was important in order for the U.S. to combat terrorism.

[W]e are concerned with recent reports that state and local law enforcement agencies are being trained by individuals who not only do not understand the ideology of violent Islamist extremism but also cast aspersions on a wide swath of ordinary Americans merely because of their religious affiliation. Media reports cite some of these self-appointed counterterrorism training experts as engaging in vitriolic diatribes and making assertions such as “Islam is a highly violent radical religion” and that if someone has “different spellings of a name… That’s probable cause to take them in.” These comments, of course, are neither factually accurate nor consistent with our nation’s fundamental values and are not made by adequately trained personnel. It appears, however, that some of these so-called experts have neither the academic nor operational background in the material about which they train.

See coverage of the letter in The American Prospect and Washington Monthly. We'll keep you apprised as the Senate inquiry unfolds.