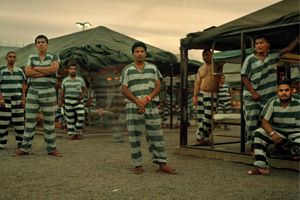 Hundreds of thousands march in our nation's capital to call — loudly — for President Obama and Congress to take on immigration reform. Obama backs a framework outlined by Senators Charles Schumer (D-N.Y.) and Lindsay Graham (R-S.C.) in an op-ed in the Washington Postthat recommends the creation of a biometric social security card, and increased enforcement over legalization, both at the border and internally.

But this was almost exactly a year ago, and now both the D.C. streets and the legislature's agenda are noticeably empty of action on immigration reform. In fact, we may even be further from reform; in the year since March 21, 2010, conservative states such as Arizona have quietly considered increasingly extreme legislation and politicians have largely avoided the hot-button issue of reform approaching the 2012 presidential election season, except forrhetoric warning of borders besieged by violence, “anchor babies,” and the economic deadweight of illegal immigration. These developments pose even greater challenges to those reporting on the people most impacted by inaction: the undocumented.

On March 15, The Nation Institute and the Arthur L. Carter Journalism Institute at NYU gave us a panel discussion, “Undocumented: Reporting on America's Invisible Immigrants,” one of a series of public conversations titled The Backstory. On the panel were Nation Books author Sarah Garland, who wrote Gangs in Garden City: How Immigration, Segregation and Youth Violence Are Changing America's Suburbs; Nation Books author of Working in the Shadows: A Year of Doing the Jobs (Most) Americans Won't Do and Investigative Fund reporter Gabriel Thompson; and Investigative Fund journalists Aura Bogado and Isabel Macdonald.

Garland highlighted how false assumptions about immigrant groups and violence allow us to distance ourselves from the cycles that can lead to the prevalence of gangs: racial income gaps, segregation, poverty. Macdonald, author of an investigation into right-wing pundit Lou Dobbs that found his estate and stables employed undocumented immigrants, revealed one of her biggest challenges in the yearlong reporting project: how to give one of the most vulnerable populations a voice so their powerful personal narratives could be heard, while also protecting their identities. Thompson spoke of the hope and high spirits he encountered among his comrades at back-breaking jobs that paid a pittance, and of how the immigrants themselves were each other's greatest resource.

Bogado reported for The Investigative Fund this past summer on political heavyweights in Arizona like Sheriff Joe Arpaio who are targeting undocumented immigrant communities. Her statement that the personal tragedies she witnessed then, “may serve as a warning sign of the brutality ahead” now seems prophetic, as the Arizona legislature recently considered an “Immigration Omnibus” bill that would target access to healthcare, education and everyday activities, such as operating a vehicle. The bill, introduced by Senate President Russell Pearce, also the author of controversial immigration law SB1070, failed March 17 by a vote of 19-11.

Note the language of SB1611: even a summary uses the term “alien” at least seven times.

In December 2010, a petition signed by more than 500 people and sponsored by Change.org forced USA Today to adjust its language in a story titled, “”Groups try to delay deportations of illegal students,“ but the widely-used Associated Press and New York Times stylebooks still state that ”illegal immigrant“ is the ”preferred term, rather than the sinister-sounding illegal alien.“ Says the Times, ”Do not use the euphemism undocumented.“

Bogado is part of a growing movement to hold the public, politicians, and members of the media themselves accountable for their words — people are not illegal. ”The dehumanizing label of 'illegal' obscures the very human experiences and struggles which undocumented immigrants face,“ Bogado wrote in The Huffington Post, covering the D.C. protests a year ago. ”Yet some are brave enough to challenge that preclusion.“