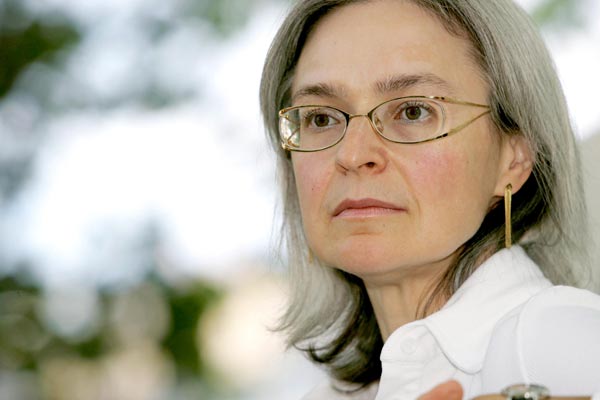 Five years ago today, on October 7, 2006, Russian investigative reporter Anna Politkovskaya was shot in the elevator of her Moscow apartment building. A year later the Prosecutor General’s office told Politkokvskaya’s newspaper, Novaya Gazeta, that the list of suspects had been narrowed to no more than four names and that a breakthrough was likely. Since that time, however, little has been learned (or at least publicly revealed) about who was behind the crime, one of the most high-profile killings of a reporter in recent memory. The investigation has been tarnished by leaks, mishandled evidence, and prosecutorial incompetence.

But last month, the Investigative Committee of the Russian Federation finally arrested a central figure in the murder, Dmitry Pavlyuchenkov, a former colonel in the 4th division of the Moscow General Internal Affairs Directorate, a surveillance unit within the city’s police force. Pavlyuchenkov is said to have brought together the team of young men — three Chechen brothers — who killed Politkovskaya. He allegedly used his resources as head of the surveillance division to have her followed and obtained the weapon used in the murder.

Rustam Makhmudov, the suspected triggerman, was arrested in May after several years, apparently, in hiding. His two brothers, Ibragim and Dzhabrail, were acquitted of helping to carry out the murder at a 2009 trial. That verdict, however, was overturned by the Supreme Court and a new investigation is underway. And today a fourth suspect, Lom-Ali Gaitukayev, a well known Chechen mobster and the brothers' uncle, was just charged in the murder.

The lawyer for the Politkovskaya family and Novaya Gazeta editor Dmitry Muratov have applauded the arrest but noted that it should have come far sooner. Novaya Gazeta, through its own independent investigation, had long ago tied Pavlyuchenkov to the murder. “Pavlyuchenkov set up a business under the former police leadership; anyone could book police surveillance for $100 an hour,” Muratov told a Moscow radio station. The questions now are who hired Pavlyuchenkov — and why has he suddenly agreed to cooperate with investigators? (He was a witness at the 2009 trial, during which he maintained his innocence, pinning blame for the murder on the Makhmudov brothers.)

“I find it too early to comment on the significance of his arrest,” Friederike Behr, a researcher with Amnesty International in Moscow who has followed the case closely, wrote by email. “His arrest, as well as the arrest of Rustam Makhmudov earlier this year, just show that the investigation has circled, for quite some time, around the same people. Pavlyuchenkov was a witness, then he was announced as the organizer of the murder (by the Investigative Committee of the RF) and now he is one of a group of suspects. His arrest will only have significance if the investigation really tries to bring the whole truth to light, including possible uncomfortable parts of the truth around the murder of Anna Politkovskaya.”

We’ve seen hints of what some of those uncomfortable truths might be. In public comments, Muratov has suggested that Pavlyuchenkov’s testimony may shed light on other significant crimes of recent years, including the killing of Russian-American journalist Paul Klebnikov. (The editor of Forbes Russia, Klebnikov was gunned down outside of his office in 2004). And there is widespread speculation that Pavlyuchenkov might reveal connections between the FSB — Russia's Federal Security Service, the successor to the KGB — and Russia's criminal underground.

“This is encouraging news, not only for the Politkovskayas but for all the families who have for so long been expecting progress on journalist murder investigations,” says Peter Klebnikov, Paul’s brother and an editor at the Environmental Defense Fund. “We understand this progress is due, in part, to breakthroughs in reforms regarding the ability of witnesses to testify. It’s a solid step towards rule of law in Russia.” Klebnikov is referring to a 2009 law passed by the Duma allowing judges to offer sentencing leniency to defendants who provide testimony against their co-conspirators, likely a factor in Pavlyuchenkov's decision to offer testimony. But, Klebnikov adds, “the country still has a long way to go to end the culture of impunity.”

Strikingly, the committee also announced, after detaining Pavlyuchenkov, that it had “information about the contractor of the murder.” This was such a startling revelation that the lawyer for the Politkovskaya family wondered publicly whether it was simply a “PR stunt.” But a few days later the Russian newspaper Kommersant, citing anonymous sources, reported that Pavlyuchenkov had entered a plea bargain and identified the figure behind the killing — an agreement that would allow him to avoid the maximum sentence of life in prison for murder. Details were scarce at first; the only other information Kommersant provided was that the mastermind was living abroad.

A couple of weeks later, however, Kommersant reported that the figure identified by Pavlyuchenkov as the mastermind behind the killing was none other than Boris Berezovsky, an exiled oligarch and close family friend of former Russian president Boris Yeltsin. Once an early supporter of Vladimir Putin — he championed the former KGB agent’s rise to power — he has become one of the prime minister’s most vocal critics. He currently lives in London where he has been granted political asylum, though the Kremlin has sought his extradition for years on charges of fraud and embezzlement.

No evidence has yet been presented linking Berezovsky to the crime, and the logic behind his alleged involvement is somewhat confounding, and remains unconfirmed by the investigative committee: that he ordered Politkovskaya’s killing simply to embarrass Putin. Politkovskaya was killed on Putin’s birthday and the prime minister (then president), after several days of silence, infamously said that she had been murdered by enemies of the state “to create a wave of anti-Russian feeling.” Politkovskaya, a long-time special correspondent for Novaya Gazeta, was known for her exposés of war crimes, corruption, and human rights abuses in the war ravaged republic of Chechnya. She was particularly critical of the Kremlin-backed Chechen leader, Ramzan Kadyrov.

“I think one has to look as well at the investigation into the murder of Paul Klebnikov or of politician Galina Starovoitova” says Behr, referring to cases that have also dragged on for years and remain only partially solved. “If the investigation only reveals half the truth and doubts remain, nobody talks about justice being done.”