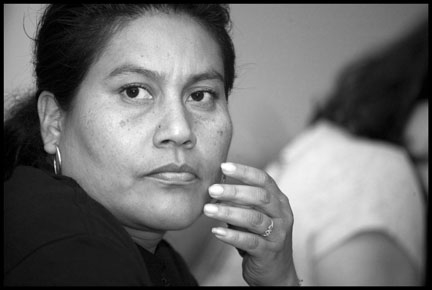 If there's one experience that Mexicans have in common more than any other, more even than hatred and repudiation of the mutual violence of the narcos and the government, it's migration. In Oaxaca, 18 percent of its 3.7 million people have left for other parts of Mexico, and especially for the United States. Almost half its towns have shrunk, and migration has become part of the daily experience for almost every family.

I just spent three days listening to indigenous people here talk about it, in a unique organization that brings together people from both sides of the border, the Binational Front of Indigenous Organizations (FIOB).

Two things make this organization different from the average hometown association organized in the United States by people from the same Mexican village or state. It's not just an organization of the people who've left, but of those who still live in those hometowns as well. And while FIOB members spend a lot of time talking about their indigenous culture (languages like Mixteco, Zapoteco, and Triqui, and the dances, music, food, and history shared by people for hundreds of years before Columbus arrived in this hemisphere), their organization has very political goals.

The debates at the FIOB meeting, which lasted for two days in Oaxaca, revolved around two general rights. One is the right to migrate, and in particular the rights of Oaxacan indigenous migrants in the United States. The other is the right to not migrate — to stay home.

Naturally, the members of FIOB in California, where it was first organized and today has several offices, feel the attack on migrant rights strongly. They came to the meeting after debating and adopting probably the most advanced and progressive proposal for immigration reform made by any migrant organization in the United States.

Mexican members, who live mostly in Oaxaca (some of whom are also migrants within Mexico itself, principally in Baja California), came to talk about the right to not migrate. To implement this right, people need economic development that can make migration a voluntary choice, rather than one forced by poverty and desperation.

In Oaxaca, that discussion has moved from agitation and critique of failed government economic policies to expectations of concrete change. In state elections this year, the old ruling party, the PRI, lost the state's governorship for the first time in 75 years, to an unwieldy coalition of the left-wing Party of the Democratic Revolution (PRD) and the right-wing National Action Party (PAN). Gabino Cue became governor. He then appointed Rufino Dominguez, former binational coordinator of the FIOB, to head an office charged with defending the interests of migrants.

Obviously this changed the relationship between FIOB and the government dramatically. Instead of governors who arrested and attacked FIOB leaders, Cue's secretary for social development was on the stage as the assembly opened, reminding delegates of his long relationship with them.

But the real change wasn't ceremonial. Delegates from Oaxaca have high expectations that the new state government, and especially its migrant affairs office, will be able to move the right to not migrate from slogan to reality.

That's a tall order in one of the poorest states in Mexico. The Mexican federal government and its neoliberal, free-market, anti-labor policies set the parameters for economic development in this country, regardless of what states do. Nevertheless, farmers want some way to stay on their land, and to sell their crops for a price that can keep them going from one year to the next.

Many delegates I spoke with also want to raise organic crops, protect Oaxaca's corn (according to legend, the state is the historic home of corn cultivation) from genetic contamination, and undo the damage of deforestation. Oaxacan women are famous weavers, and indigenous artists and crafts people also see their production as a potential road out of the trap of forced migration.

Listening to the hundred-plus delegates trying to combine these related elements into a political program, and then into action capable of realizing even a part of it, was a moving experience. I don't think there is any other place in our two countries where a debate and discussion like this takes place — not among academics discussing migration, but among the people who live it as a daily reality.

FIOB is run by its members, supported by their dues and participation. I used to be an organizer for the United Electrical Workers, so the culture of rule by the rank-and-file and fighting for social change, feels very familiar. In fact, it's enough to make you believe that these aren't ideas or practices tied to any particular nationality or culture, but part of the best of human experience.

This year Gaspar Rivera Salgado, the first Mixtec professor in the United States (at UCLA), and one of the few delegates who was around when FIOB was organized 20 years ago, stepped down as its binational coordinator. While other positions were filled by Oaxacan migrants living in California, the new coordinator, Bernardo Ramirez, lives in the heart of the Mixteca region of Oaxaca. Ramirez worked five seasons in the fields of the United States, an experience he shares not only with almost every FIOB delegate, but with hundreds of thousands of others throughout this one state alone.

His election promises another big change. The center of gravity in FIOB is moving south into Mexico. That's not hard to understand. The change in Oaxaca's state government opens up new political possibilities, and it won't be a surprise if FIOB members are elected to state, and even national, office in the next few years.

Nevertheless, “the fact that one of its best recognized leaders [Rufino Dominguez] is now a government official doesn't mean that the organizations will simply obey the state government,” observed Arturo Cano, longtime journalist for the Mexican left-wing daily, La Jornada.

This change gives us a better chance to hear the voices of Mexicans as they debate what should be done about the principal phenomenon that draws our people together — their movement back and forth across the border. We need a Mexican voice from the left. For years FIOB has opposed guest worker programs and the exploitation of undocumented migrant labor. It has fought for the right of migrants to full political and labor rights in both countries.

But now people in the United States will also have the chance to hear Mexicans talk about their right to stay home. That means they will expect us to do more to oppose the measures designed on Wall Street (listen up, you Occupiers) that have enforced poverty on the indigenous people of Oaxaca's countryside. With three trade agreements approved in Congress just last week, that’s something we should be doing anyway, and not just for Mexicans or Colombians, but for Americans too.

For me, though, two days of political discourse have some added benefits. The pleasure of listening and interacting with FIOB is that along with the talk you get to eat mole, watch thedances of the Guelaguetza (and dance a little yourself) hear explanations of the pre-Hispanic codices, and share the sophisticated culture of these warm and engaging people.

David Bacon is a writer and photojournalist based in Oakland and Berkeley, California.