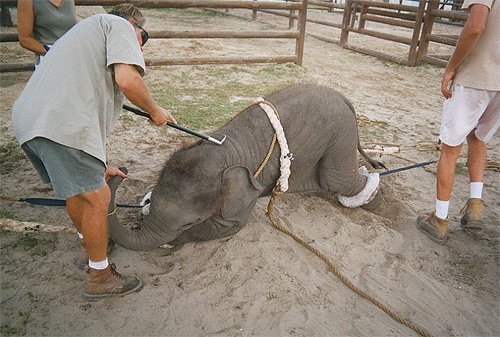 Using a bullhook on a baby elephant | Credit: COURTESY WE3THINKING

Pulitzer Prize-winning investigative reporter Deborah Nelson has a heartbreaking expose in the November/December 2011 issue of Mother Jones about ritual animal abuse, specifically, elephant abuse, that occurs in the most famous circus in the country, Ringling Bros. The circus, which was purchased by Feld Entertainment in 1967 for more than $8 million from a Ringling grandson, makes its money off the backs of its elephants — the show's symbol for the past 100 years. And yet its trainers use bullhooks, electric shocks, and whips to control the animals, often resulting in lacerations, visible injuries, and even death.

Nelson traces Ringling Bros' history of mistreating its elephants from 1998, interviewing the USDA's legal counsel, who for years was charged with prosecuting animal welfare cases, and animal activists who have been trying for years to get the big circus to shut down its elephant act, and follows the recent trial against Ringling. She finds that despite videos of trainers abusing their charges (they're embedded in the story; I was too scared to watch them myself), damning testimony from a veterinarian and whistleblowers who came forward, and multiple cases of suspicious animal deaths, the USDA has refrained from filing a case against the entertainment empire. This recent trial ended on October 28, 2011, when a three-member panel upheld the original judge's ruling that the plaintiffs had no standing to protest Ringling Bros' treatment of its animals as they themselves had not been personally harmed by it. The animals, who had been harmed, had no legal standing.

Since the death of Kenny the elephant in 1998, the USDA has conducted more than a dozen investigations into Feld Entertainment. But nothing has changed. The whistleblowers, Glenn Ewell and James Stechcon, had worked with Ringling Bros. for three months on the road. They said they witnessed routine animal abuse and many extended beatings of the pachyderms.

Several of the beatings targeted Nicole, a twentysomething elephant named after Kenneth Feld's eldest daughter. Sweet-natured but clumsy, Nicole would frequently miss her cues to climb atop a tub and place her feet on the elephant next to her, Stechcon said in his videotaped statement. “I always rooted for her, 'Come on, Nicole, get up,'” he said. “But we left the show, brought the animals back to their area, and…we took the headpieces off, and as I was hanging them up, I heard the most horrible noise, just whack, whack, whack. I mean, really hard. It's hard to describe the noise. Like a baseball bat or something striking something not—not soft, and not hard…I turned around to look, and this guy was hitting her so fast and so hard [with the ankus], and sometimes he would take both hands and just really knock her, and he was just doing that. And I was, like, I couldn't believe it.”

Benjamin, a precocious three-year-old, also suffered frequent beatings from his trainer, Ewell and Stechcon said. Able to balance on a wooden barrel, ride a tricycle, shoot hoops, play musical instruments, and paint a picture by holding a brush with his trunk, Benjamin had appeared on The Today Show and CBS This Morning. His trainer, Pat Harned, told journalists that Benjamin had been trained thanks to rewards of bread or bunches of bananas.

The whistleblowers told investigators that Harned also used force. “Pachyderms want to throw things on their back, it's a—it's a genetic response. Anyway, I saw Benjamin, after he was brushed off, take some sawdust and throw it on his back,” Stechcon said. That upset Harned, who “dealt with it accordingly, with a bullhook, striking Benjamin all over the head, quite forcefully and repeatedly. It was not pretty.”

Derby helped the men file a formal complaint to the USDA. In early January, a senior investigator and veterinarian followed up with a surprise visit to the Blue Unit, on tour near Miami. The USDA team found scars and abrasions on several elephants and a fresh puncture wound on another. Another Ringling employee reported treating hook boils—infected bullhook wounds—“twice a week on average.”

But all five trainers and handlers named by Ewell and Stechcon denied abusing elephants or ever seeing anyone else do so. “I have a very good relationship with the elephants, especially the babies Benjamin and Shirley,” Harned told the investigator. “There is no abuse of any of the elephants. I treat these elephants as my children.”

Read the rest of the story on the Mother Jones website.