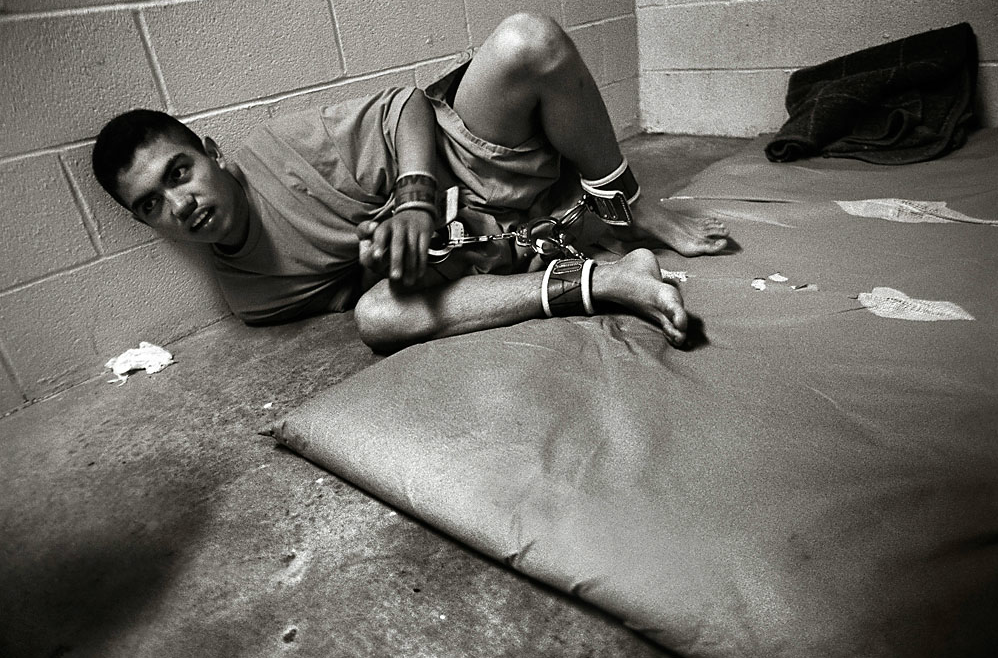 The latest edition of Dart Society Reports, the publication of the organization for journalists who cover violence, has as its cover story a chilling account of solitary confinement in America. Through a 16-minute video and a nearly 6,000-word article aptly titled “The Gray Box,” Denver-based journalist Susan Greene captures the deadening silence and utter lack of stimulation that characterizes the life of a prisoner held in isolation. The first voice on camera reads words from the legal declaration of Tommy Silverstein, currently in his 28th year of solitary confinement, describing the cell where he spent all his time. It was so small that if he extended his hands, he could touch the walls on either side. The ceiling was so low that he could reach up and touch the light fixture. The video goes on to tell the stories of Brian Nelson (spent 23 years of his 28-year sentence in solitary confinement; went on hunger strikes in protest, the longest lasting 48 days); Vicente Rodriguez (painted using pigments from Skittles and employed art materials made of candy); Robert Felton (befriended spiders and beetles, made a chessboard from toilet paper and played against himself); and more. It cuts from these stories to the spokesperson of the Department of Corrections, Katherine Sanguinetti, who refers to solitary confinement as “administrative segregation,” and insists that solitary is reserved for the most dangerous, disruptive, and violent inmates.

Many of the inmates featured in the video (now released) were convicted of serious crimes. Nelson was convicted of murder, as was Rodriguez. But “I'm human,” says Rodriguez, as he silently pleads for our empathy. “Places like that is not good for us. Period.” That was one of Greene's biggest challenges while working on this story, she says. Solitary confinement is “a certain kind of trauma. It's a challenge to write or use the word ”trauma“ about people who have traumatized other people. Some people have no empathy or tolerance for them.” Greene meets regularly with friends who work on this issue, law professors and attorneys who represent inmates stuck in solitary. “I go out to dinner with them every month, and two of them are always saying, 'No one cares! No one cares!'”

Some inmates are in solitary for serious crimes; Greene tells the story of others who don't seem to belong with the worst offenders. A 17-year-old who accidentally killed someone while driving under the influence was tried as an adult and committed suicide while in solitary. Then there's Anthony Gay, who

had a low-level assault charge in Illinois for punching another kid, stealing a dollar from him and swiping his hat. A parole violation on his seven-year suspended sentence ultimately landed him in a state supermax where he has cut himself hundreds of times with shards of glass and metal, and eats his own flesh. He has racked up a 97-year sentence for throwing urine and feces out his food slot — behavior that’s fairly typical for severely mentally ill prisoners in solitary.

Gay passes his time at the Tamms Correctional Center writing anyone who will receive his letters.

“I've been trapped for approximately nine years. The trap, like a fly on sticky paper, aggravates and agitates me,” he writes. “America, can you hear me? I love you America, but if you love me, please speak out and stand up against solitary confinement.”

Nelson, who features in both the video and the story, has been a free man in Chicago for a year and a half. But it is a strange kind of freedom, filled with anxiety and alienation.

“I'm here, but I'm not here, if that makes any sense,” he says from behind the wheel of his Jeep Compass, disoriented on the South Side. “People ask me what hurts. I say the box, the gray box. I can feel those walls and I can taste them every day of my life. I'm still there, really. And I'm not sure when I’m ever gonna get out.”

It was difficult for Greene to report on this story, which took three months of work. In a sense, she had been reporting it ever since she left the Denver Post, where she had been a metro columnist. She would get letters from inmates in solitary confinement, and when she left the newspaper, her files on solitary were the only ones she took with her. “I knew I wanted to look more closely at it,” she said in a telephone conversation. It was challenging to report because there was no access to her sources: solitary confinement can mean no visitors and no phone calls. “By definition, they are so distanced already, these guys are so far from us than anybody on the planet, because they are totally inaccessible,” Greene says. Those she was able to meet, those who were no longer in prison, also presented difficulties. They had “major trust issues. Let me put it this way: I've never been stood up this many times in my reporting before. Just talking on the phone, just — they are so uncomfortable with women. Having conversations is tough with them.”

Back home, she would have to juggle the traumatic stories she had heard with the mundane requirements of being a parent. She “dealt with it by compartmentalizing. I'll pick up my kids from school, and then the mailman arrives. While the kids are doing their homework or on their instruments, I'll read the letters. Then I'll have to make dinner. Life just pulls you out.”

One of the most popular articles on the New Yorker's website also deals with America's obsession with mass incarceration and solitary confinement. “The Caging of America” by Adam Gopnik, begins, evocatively, “A prison is a trap for catching time.” Gopnik describes the mind-numbing boredom of life in prison, and examines how this country's over-reliance on imprisonment evolved to such a point that there are more black men in the grip of the criminal justice system today than the total number enslaved in 1850. “Every day, at least fifty thousand men — a full house at Yankee Stadium — wake in solitary confinement,” Gopnik writes, “often in 'supermax' prisons or prison wings, in which men are locked in small cells, where they see no one, cannot freely read and write, and are allowed out just once a day for an hour's solo 'exercise.'”

Steve Liss, the photographer whose black and white image of a child in a bunk accompanies the story (and who graciously gave permission for The Investigative Fund to use some of his images with this blog post; click on the camera icon to see the slideshow) has a series on his website called “Children Behind Bars.” His haunting photo-essay begins, “This is the world of young felons, of kids gone astray, of children as young as 10 who cry for their mothers from behind bars.” Liss's images describe that world with heart-rending honesty. One photograph shows a young boy standing on a crate in order to reach the desk where a deputy is fingerprinting him. Another shows a young man half-on, half-off a mattress on the floor, the manacles around his ankles chained to his wrists. The mattress is old and tearing in places. He is tied up like an animal. (In fact, as Greene points out in her piece, “New federal guidelines on the use of laboratory animals require relatively more space, sensory stimulation and environmental enrichment than we afford people in confinement. The revised rules put forth by the National Academy of Sciences call for significantly more square footage to house a head of cattle, for example, than prisons provide in solitary.”)

On page 1473 of the US Constitution (available online here), under the subhead “Cruel and Unusual Punishments,” a paragraph reads:

But in Weems v. United States40 it was concluded that the framers had not merely intended to bar the reinstitution of procedures and techniques condemned in 1789, but had intended to prevent the authorization of “a coercive cruelty being exercised through other forms of punishment.” The Amendment therefore was of an “expansive and vital character”41 and, in the words of a later Court, “must draw its meaning from the evolving standards of decency that mark the progress of a maturing society.” [emphasis added]

Greene says that the punishment of solitary confinement has “to do with this language in the Eighth Amendment, about the evolving standard of human decency. ”It's like the saying about a tree falling in a forest, she says. “If no one knows about the situation of these guys in solitary confinement, the standards of human decency can't evolve. That's why it's important to get people to care.”