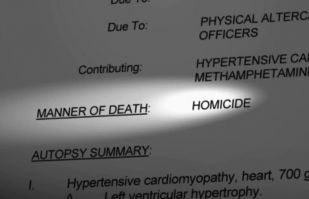 Crossing the Line at the Border aired on PBS Need to Know on April 20, 2012

As a result of an Investigative Fund/PBS investigation into the death of San Diego resident Anastasio Hernandez Rojas, a grand jury is convening today to consider possible criminal charges against US federal agents involved in the incident, according to the Associated Press.

The segment aired on April 20, 2012 on the PBS show Need to Know. At its center was new video footage of Hernandez Rojas, an undocumented immigrant, parent, and construction worker who had been caught by US Border Patrol in May 2010. The grainy video showed him lying on the ground, handcuffed, while more than a dozen US Border agents surrounded Hernandez Rojas. They punched, kicked and used a Taser on him for almost 30 minutes. The agent tasing him repeatedly shouted, “Quit resisting,” even though Hernandez Rojas was restrained and prone on the ground. In one of the videos, he can be heard begging for help. Three days later, Hernandez Rojas died. The San Diego Coroner ruled his death a homicide, but after an investigation by San Diego police, no agents were ever indicted.

The story was widely picked up and the video footage re-aired on CNN, MSNBC, and many other outlets. Sixteen members of Congress wrote a letter to Attorney General Eric Holder, calling for a new investigation. Hernandez Rojas' mother traveled to Washington, DC, to ask for justice in her son’s killing.

For more than two years, the Department of Justice had sat on the case, but the public exposure in the wake of the broadcast spurred attorneys there to investigate in earnest, said Andrea Guerrero, executive director of Equality Alliance in San Diego who, along with members of the Southern Border Communities Coalition, had brought Luz Rojas Hernandez to meet with the Department of Justice.

Within weeks of the broadcast, FBI agents began contacting eyewitnesses; it appeared as if the investigation was picking up pace. The recent FBI probe into Hernandez Rojas's death appears to have led to the convening of the grand jury today.

At a press conference this afternoon, Maria Puga, Anastasio Hernandez Rojas' widow, said, “It has been more than two years of waiting. I believe this is a step toward justice.”