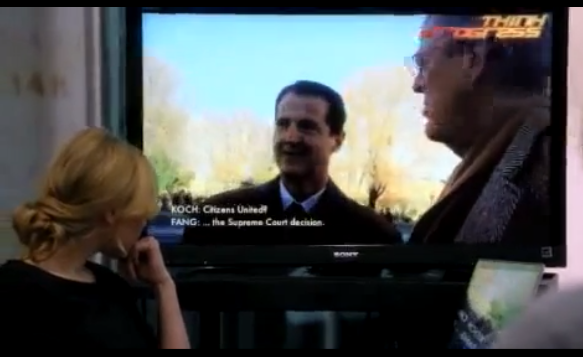 HBO show The Newsroom featured a video clip of an interview between reporter Lee Fang and David Koch, Season 1, Episode 5

Here at The Investigative Fund, we usually measure our success by media pick-up, raising awareness of the issues we are writing about, and once in a lucky while, honest-to-goodness real-world impact such as the recent statement released by Members of Congress in response to a story we did on the abuses committed by US Border Patrol officers. (Hopefully that will lead to something more, as did our earlier story on the border patrol.)

Clearly, though, we were missing part of the equation. HBO's new show The Newsroom is filling in the blanks. On last Sunday's episode, the Aaron Sorkin production featured a staff meeting where the subject of discussion was the Koch brothers and Citizens United. (As you can see, we're no strangers ourselves to the Koch brothers' undue influence story or ones about money in politics.) The Koch brothers had their fingers all over the Supreme Court decision through the funding of organizations such as the Cato Institute and the Institute for Justice, which filed amicus briefs to the court arguing that the First Amendment protected unlimited corporate spending in politics. Yet, Newsroom character Jim Harper says before hitting play on the video interview, David Koch “seems to pretend he's never heard of it [i.e., Citizens United].” Watch the clip below.

The impromptu interview was conducted with David Koch as he was leaving the swearing-in ceremony of Speaker John Boehner (R-OH), by Lee Fang for ThinkProgress. Clearly, we recognized the brilliance of Fang's interviewing skills before HBO did, as we gave him a grant to do this Investigative Fund story last year. Now, we are pleased to announce, he is the newest member of our stable of fellows at The Nation Institute (so new, in fact, that his fellows page has yet to be created.) Fang joins Kai Wright and Gary Rivlin as the new Investigative Fund reporting fellows at The Nation Institute (more on these two exceptional journalists soon).

Now if only 30 Rock could work us in somehow...