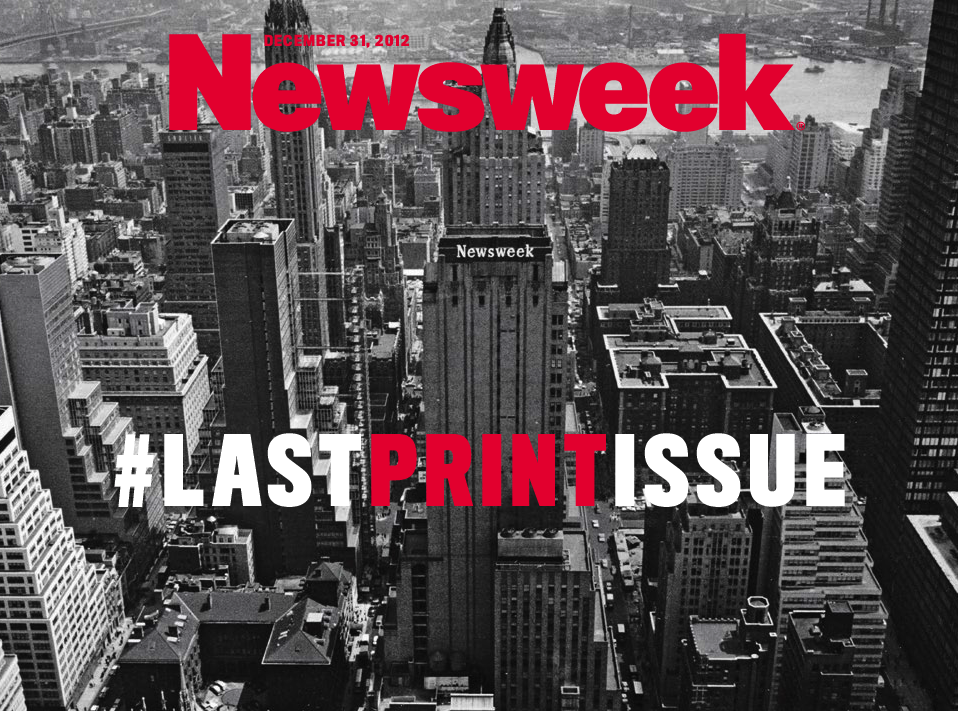 The final cover of Newsweek's last print issue in December 2012 says it all: #LastPrintIssue

On December 31, 2012 the final print edition of Newsweek went to the newsstands. Splashed across the cover photo, the headline said it all: #LastPrintIssue.

In its pages was the announcement that, after almost eighty years of circulation, Newsweekwould be switching to an entirely digital model for 2013. Subscriptions were down to only 1.5 million (a mere half of its record high of 3 million), and with 70 million tablet users in the United States alone and 2 in every 5 Americans reading newspapers and magazines on mobile devices, the move was hardly shocking.

In fact, Tina Brown's magazine isn't the only publication that “reorganized” last year. For the fourth time in five years, the New York Times offered voluntary buyouts — with a threat of inevitable layoffs if they were not taken. The Guardian expressed the desire to reduce its staff by 68 across various titles, and the award-winning New Orleans Times-Picayune has limited its publication to only three days per week in order to stay afloat and not close its doors completely.

According to a joint report from the Council of Economic Advisers and the job networking website LinkedIn, newspapers are the fastest shrinking industry in America (see graphic). According to trade website Media Business, “While LinkedIn's data showed newspapers in decline, it also indicated that other areas of journalism were growing. The number of jobs in online publishing increased 24.3% between 2007 and last year, and Internet jobs increased 24.6%.” (Editor's note: We'd provide you with the link to the original report, but unfortunately, it seems to be invalid.)

Paper Cuts, a website that tracks newspaper layoffs, lists the number of layoffs and buyouts at papers in 2012 as more than 1850 (though this number includes non-editorial positions as well).

Little wonder, then, that the ranks of freelancers are swelling as laid-off reporters struggle in the sluggish economy. But life as a freelancer is very different than life as a staff writer.

“The number one pressure for freelancers and staff writers — who are often contract writers — is healthcare and benefits,” says Andrew Van Slyke, an organizer for the National Writers Union.

The second pressure would be the lack of a steady paycheck. Though the median salary for a full-time reporter is an unglamorous $36,000, it is regular income.

Freelancing, on the other hand, is a constant hustle, as Erika L. Sanchez will tell you. Sanchez, a frequent contributor to NBC Latino and a columnist at Cosmo Latina whose byline appears regularly at several other publications as well, still has to work thirty hours a week at a non-profit to make up for the irregularity and uncertainty of the freelancing life.

“It's so nerve-wracking not knowing when I'm going to get paid or not knowing what to pitch — I couldn't do it if I didn't have a part-time job,” she says.

According to Who pays writers?, a blog that crowd-sources which publications pay, and how long they take to pay, most Internet writing pays no more than $200 a piece and several prominent publications such as Time Out New York and Salon take months to pay writers — and often only did so after multiple reminders.

“With freelancing, I'm always working,” Erika says. “I'm constantly doing something — either trying to contact people for interviews or setting up appointments or trying to pitch. There is always something to do — it never really ends!”

I graduated from college in May 2012 — a time when an entry-level job of $35,000 a year with health and dental insurance sounded more like a luxury than a taken-for-granted next step. A part-time media job that I had taken during the spring — with an unofficial promise that it would turn into a more permanent editorial position once I graduated — fell through. I was disappointed, but accepted it. After all, I didn't really want to do social media marketing; I wanted to be a writer.

So, I started freelancing, not only because I wanted to write, but also because the economy seemed so bleak that I figured that over-qualified applicants against whom a recent graduate couldn't compete would snap up staff writing jobs.

My original plan was to work enough jobs to fund my creative work. After taking on five different jobs, and often juggling three or four of them over the course of one day, I realized I was draining my creative energy and constantly exhausted. I decided to keep a few side gigs — things like babysitting and copywriting — and use the contacts I had to tirelessly pitch and write stories and, hopefully, grow my network.

That's where I'm at now.

It doesn't help pay my bills, but it is comforting to know that other journalists I admire are in the same boat as me — pitching articles, and when they're accepted, writing them to the best of their abilities on tight deadlines and then waiting for checks while living frugally and subsisting on income cobbled together from savings and various side jobs.

But comforting as it is to be in good company, it's an unsustainable system.

Many people, from veteran journalists to anyone with a dose of common sense, will tell aspiring journalists not to pursue journalism. They will tell us that it is a dying field and encourage us to put our writing and communication skills to use somewhere else.

For many, this is great advice — and there are several ways to be a part of media production that don't involve hoarding your savings from a few summer jobs, living in the cheapest apartment you can find and staying afloat by constantly hustling. But we need journalists too. We need people who can take breaking news, statistics and facts and translate it for mass consumption. We need people to call things out. We need people who can find untold stories and broadcast them to the general public. We need people who can humanize these stories, make them compelling, and inspire others to take action against injustice.

We need to recognize those skills as important and — somehow — find a means to compensate creative labor.

Anna Lekas Miller is a freelance writer living in Brooklyn, NY. Read more of her work on her websiteannalekasmiller.com or follow her on Twitter @agoodcuppa.