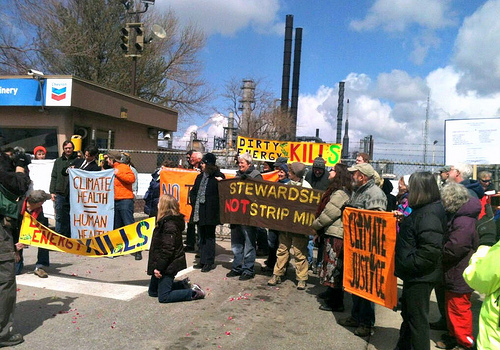 TransCanada, the company behind the Keystone XL, has created detailed dossiers on people who have protested its tar sands pipeline. This photo was taken in Salt Lake City. | Credit: COURTESY TAR SANDS BLOCKADE

TransCanada, the company behind the construction of the Keystone XL tar sands pipeline, is stirring up trouble in Nebraska as it warns local law enforcement authorities that activists and landowners opposed to the project are a potential security threat. Documents obtained last week by Bold Nebraska, a group fighting the pipeline, reveal that the company has been circulating a power point presentation to various state and federal officials, including the FBI, which describes local landowners as “aggressive” and “abusive” and advises local officials on legal strategies for prosecution. Additional documents obtained this week show that Nebraska's Attorney General's office has shared confidential information about pipeline security with the Department of Justice. Those documents remain classified.

On April 25 TransCanada held what it called an “educational training opportunity” for local law enforcement authorities and county district attorneys along the proposed pipeline route. According to Deb Collins, a spokesperson for the Nebraska State Patrol, the meeting was initiated by TransCanada but organized and facilitated by the state police. A representative of the Nebraska Information Analysis Center, one of more than 70 Homeland Security “Fusion Centers,” also gave a presentation on what in law enforcement circles is known as “Suspicious Activity Reporting.” In an email statement Collins said it is not uncommon for private corporations to “exchange information with the Nebraska Fusion center on issues related to Homeland Security.” She confirmed that the fusion center provided an overview of “possible unlawful tactics and techniques which law enforcement could encounter by individuals/groups opposed to the Keystone Pipeline.” The report discussed the Keystone XL Pledge of Resistance, signed by more than 60,000 people, and referred to pipeline opponents as “environmental extremists.”

Bold Nebraska first learned of the meeting through landowners who are friendly with one of the county sheriffs in the state. According to Jane Kleeb, executive director of Bold Nebraska, activists and landowners in the region are generally on good terms with local law enforcement; their beef is with TransCanada and the pipeline development, which crosses their land, not local or state police. Thus, Kleeb says, TransCanda's cozying up to local law enforcement is troubling. Not only have they attempted to influence local and state officials —standard fare in the oil and gas industry, as I report in the Summer issue of Earth Island Journal — but they are now painting the opposition as potential criminals engaged in unlawful activity. “They are creating unnecessary tension,” Kleeb says.

Although the documents were released last week in response to a Bold Nebraska FOIA request, news of the meeting was first reported in a May 2 article in the Lincoln Journal Star. The story characterized law enforcement as more concerned with outsiders than local pipeline opponents. “I think the locals will handle it very well,” Nance County Sheriff Dave Moore told the Star. “We're a little concerned about people traveling to do their protest. We do not know them.”

If the local sheriffs do not know them, Homeland Security and TransCanada do. In their presentation to Nebraska law enforcement officials Transcanda included slides of activists arrested in Texas and Oklahoma as well as the legal justifications for those arrests. They also singled out three prominent organizers: Scott Parkin of the Rainforest Action Network, Tar Sands Blockade's Ron Seifert, and Rae Breaux of 350.org, all of whom are committed to using the tactic of non-violent civil disobedience to promote social change. “We've been fighting coal, oil and natural gas for a long time using these time-honored tactics and strategies,” Parkin said in a press release. “We'll continue to use them precisely because they have been so effective in making change throughout American history.”

TransCanada's “dossier” is in some ways reminiscent of Exxon Mobil's “Activist Facebook” created in 2004 and distributed to shareholders at the company's annual meeting. At the time Exxon Mobil was facing mounting opposition from activists in Texas who, it was later revealed, were the subjects of FBI surveillance.

Information sharing among local, state and federal law enforcement agencies has become one of the central functions of the Department of Homeland Security. The more than 70 fusion centers — whose primary task is to analyze and share information with public and private security agencies — are part of Homeland Security's growing “Information Sharing Environment” (ISE). The National Information Exchange Model, created in 2005 and part of ISE, facilitates information sharing between “governmental entities as well as with private sector and international partners.” As recent leaks about the NSA's sweeping surveillance programs have shown, there is no shortage of data being collected by the federal government. The problem — at least from the vantage point of government agencies — is how to sift through and analyze the crushing flood of information. This is where corporations like TransCanada, or security agents working for natural gas companies, might provide some direction. By suggesting to law enforcement that their opponents are potential terrorists or have engaged in “unlawful activity” — regardless of whether it is non-violent civil disobedience or vandalism or property destruction — corporations are targeting citizen-activists.

Of course, information flows both ways. Recent reports by The Center for Media and Democracyand the Partnership for Civil Justice Fund reveal that the FBI and Department of Homeland Security shared valuable intelligence with private corporations about Occupy Wall Street protesters. As the PCJF put it, federal agencies were acting as a “de facto intelligence arm of Wall Street and Corporate America.”

This hasn't prevented corporations from spending enormous sums on their own security and intelligence capabilities. As I reported in Earth Island Journal, annual spending on corporate security and intelligence is now roughly $100 billion, double what it was a decade ago. (To give some perspective, the DHS budget was about $60 billion last year). If cyber security and surveillance were included, the figure would be much higher. In this light it is hardly surprising that groups like the Pennsylvania-based anti-fracking group Gas Drilling Awareness Coalition (GDAC), Occupy Wall Street, Rising Tide, and now Bold Nebraska have been swept up in the national security net.

Groups like GDAC and Bold Nebraska are well aware they face an uphill battle. Both are confronting some of the most powerful corporations in the world at a time when the debate over fossil fuel extraction has reached a fever pitch. (Bold Nebraska, for example, is suing the state for what the group contends is an unlawful pipeline routing law, which allowed TransCanada to bypass the standard permitting process. If Bold Nebraska wins, Kleeb says, the proposed route would be scrapped and TransCanada forced to start over.) Still, members of these groups held out hope that government and law enforcement would be neutral arbiters.

Instead, they find themselves in the cross hairs of an ever-expanding government-corporate security state. “We want to know if they are having us tagged as terrorists,” Kleeb says. “Are we under surveillance now? Are we being followed?”