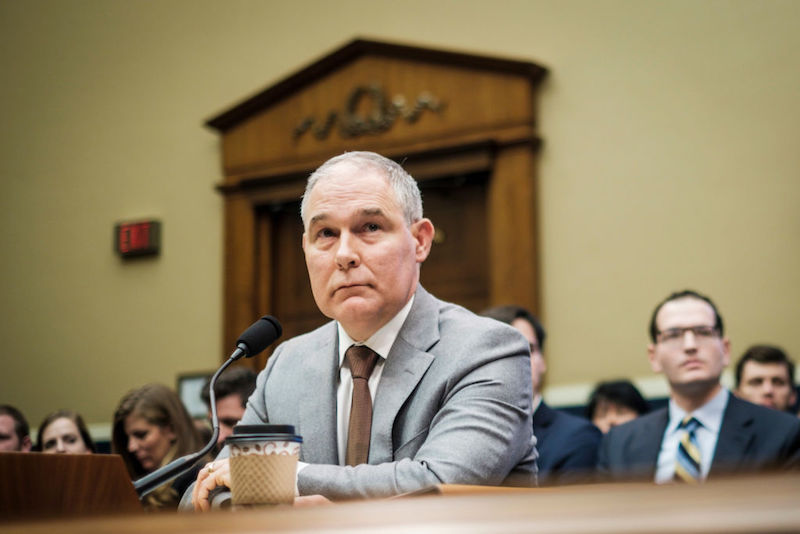 Pete Marovich/Getty Images
EPA Administrator Scott Pruitt testifies before the House Energy and Commerce Committee about the mission of the U.S. Environmental Protection Agency on December 7, 2017 in Washington, DC.

Scott Pruitt, the embattled EPA chief whose lavish spending has come under intense scrutiny, had extravagant tastes well before he came to Washington. In 2014, while he was attorney general of Oklahoma, the expenses of his office were $27.7 million higher than those of his predecessor, Drew Edmondson, according to a state audit published in 2016. Almost $23 million of his total budget fell into a category called “administrative expenses.” While it’s unclear from the audit what costs are included under this heading, Pruitt’s administrative total is more than 93 times what Edmondson spent on “miscellaneous administrative” expenses in 2009, according to a separate audit.

With fewer than 4 million people living in Oklahoma, Pruitt’s 2014 expenditures amounted to more than $14 per state resident. The 2014 budget for the Oklahoma attorney general’s office, which totaled $55.7 million, was more than double the $23.6 million spent that year by the attorney general of Arkansas, a neighboring state with a similar population. (In 2015, Pruitt’s office spent a total of $48.6 million.)

Pruitt’s administrative costs for 2014 came in more than $10 million over the budgeted amount for administrative expenses that year and $16 million over what his office spent in the same category the following year. The Intercept contacted the attorney general’s office and the Office of Management and Enterprise Services, neither of which could clarify exactly what fell under the category of administrative expenses. “I do not know if we drill down to that level of detail in the budget system,” said Shelley Zumwalt, a public affairs director.

A small part of the increased spending may be due to higher rents. Pruitt moved the Tulsa branch of the attorney general’s offices from a less expensive office building on the outskirts of the city into the Bank of America Tower downtown. The new office was more than twice the size of the old one and more expensive per-square-foot, so annual rental expenses quadrupled from $34,950 to $142,408, according to a 2014 lease.

And while much of the rest of Oklahoma’s state government was growing smaller, Pruitt, an advocate of small government, added 58 staff members to his own agency, according to the Associated Press. By December 2016, the state attorney general’s office had 207 employees, up from 149 in 2011, when he assumed the position. Spending on personnel shot up from about $14 million to $19 million between 2008 and 2015, according to the audits.

Pruitt also upgraded the office’s vehicles. In 2017, when he left to join the Environmental Protection Agency, his state agency had 303 cars and trucks, up from 277 when Edmondson left office in 2011, according to numbers provided by Oklahoma’s Office of Management and Enterprise Services.

Pruitt also rode in a fancier car than his predecessor, according to Gary Jones, the state auditor. “He went and got himself a big, black SUV just like the governor’s,” said Jones, who noted that Edmondson had made do with a Ford Crown Victoria.

As attorney general, Pruitt was known for his legal activism. He had received little attention during the eight years as a state legislator. But his political career soared when he began attacking President Barack Obama both verbally and through the courts — with the support of energy company officials, groups supported by the Koch brothers (who helped securehis nomination), and industry groups. While attorney general, he not only sued the EPA 14 times, but he also took the federal government to court over the Affordable Care Act. According to the Oklahoma State Budget request, 31 percent of the attorney general’s spending went to legal services in 2014.

One of the attorneys who teamed up with Pruitt to sue the Obama administration was David Rivkin, who represented Oklahoma in a lawsuit over the Clean Power Plan in 2014. When Sen. Cory Booker asked Pruitt in January 2017 whether the state had paid Rivkin, Pruitt responded in writingthat he had not. Pruitt also wrote that Rivkin had not been paid by a third party. “Our Office would not enter into any such agreement for representation if it believed that the attorney was not truly working pro bono, and the Office would seek assurances from the attorney that they were,” Pruitt wrote.

According to Terri Watkins, director of communications for the Oklahoma attorney general’s office, Rivkin did his work for the state pro bono, but without a contract. “To not have a contract for pro bono work is apparently not unusual,” Watkins said.

The pro bono arrangement raises several questions. Rivkin, who established a legal project to represent climate deniers and has been defendingPruitt during his current political crisis, is a partner at BakerHostetler, a firm that has business before the EPA. And the fact that one if its partners has done Pruitt a favor could bias the EPA administrator toward the firm, according to John Walke.

“How might those cozy relationships and paybacks and other unspoken favors have translated into [Pruitt’s] time at EPA?” asked Walke, who is in charge of national clear air advocacy at the Natural Resources Defense Council. Walke said that several people expressed concern about Pruitt’s relationship with Rivkin during his confirmation process. “None of us could recall any other instance in which a state or federal agency was represented pro bono by a private law firm, much less one that has extensive clients with business before the government agency.”

According to BakerHostetler’s website, the firm’s pro bono program grows out of its recognition of “the importance of applying our resources and knowledge to assist those in need.” It is unclear how Pruitt or Oklahoma qualify as being “in need.” Rivkin and BakerHostetler did not return calls asking for comment.

Nor is it clear how much of the attorney general’s $23 million administrative budget for 2014 was spent on outside attorneys. Oklahoma law requires agencies that spend public money on private attorneys to report their expenditures, but after 2012, as the Oklahoma-based publication Frontier reported last year, Pruitt exempted his own office from that requirement.

In response to inquiries, Watkins provided a document she said included records of all the attorneys hired by the attorney general’s office since 2011. But that document was simply a set of contracts with outside law firms with no breakdown of how much was actually spent.