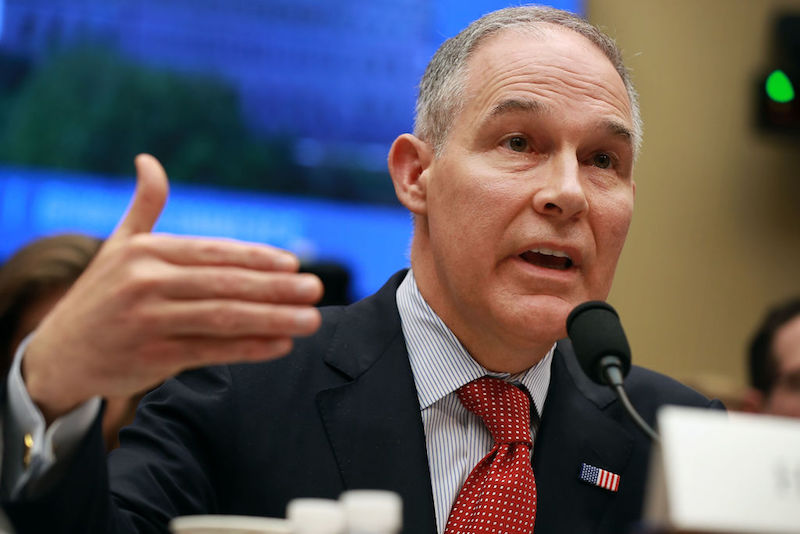 Kristen Mello wasn't invited to the Environmental Protection Agency’s upcoming “National Leadership Summit” on PFOA, PFOS, and other PFAS chemicals. For most of her life, Mello, a member of Westfield Residents Advocating For Themselves, drank water contaminated with the chemicals that are going to be discussed at the meeting. At least six compounds in this class seeped into local drinking water from firefighting foam used at the Air National Guard base in her hometown of Westfield, Massachusetts. Mello and several of her immediate family members have developed some of the health problems associated with the chemicals, including thyroid disease, ulcerative colitis, and liver problems. While most people in the United States have been exposed to PFAS, Westfield is one of the growing number of communities to learn they’ve had an especially high dose of the chemicals as the result of living near a military installation or manufacturing site that used them.

But when Mello sent the EPA a request to attend the PFAS summit, which will be held May 22-23 at EPA headquarters in Washington, D.C., the agency said she wasn’t welcome. “EPA has limited the invitation to federal partners, states, territories, tribes and representatives from national organizations,” the EPA’s Office of Ground Water and Drinking Water wrote to Mello in an email. Although the summit is intended to identify actions “needed to address challenges currently facing states and local communities,” according to the agency’s website, the people in these communities who are directly affected by the chemicals will be strikingly absent from the meeting.

“We have 35 members as part of our coalition and every single one of them has reached out either to the EPA or to their state agencies asking to be represented at the summit,” said Shaina Kasper, Vermont and New Hampshire state director at the Toxics Action Center. “In each case, we’ve heard, ‘No, there will be no community group representation.’ We’re so disappointed.”

While the people suffering from this contamination will not be at the meeting, the manufacturers of the chemicals used in the production of Teflon and other nonstick, water-resistant, and stain-resistant products will be well represented. Jessica Bowman, an attorney who works for the American Chemistry Council and the Fluorocouncil, an international group representing companies that make PFAS chemicals, will be speaking at 9:15 a.m., according to the meeting agenda.

When asked how the EPA had decided whom to invite to its meeting, an agency spokesperson replied in an email that that “EPA’s goal in this effort has always been to ensure that states and local communities have the tools they need to address PFAS contamination in their local areas. With that goal in mine [sic], we are working with our partners at the state and tribal levels and our across the federal family for this event. We also understand the importance of having representation from utilities, non-governmental organizations, industry, Congress and other national associations.” When asked which nongovernmental organizations were invited to the meeting, the EPA didn’t respond.

The EPA will stream one hour of the meeting, and also recently announced a plan to visit states with impacted communities this summer.

Suppressing New Standards
The summit comes on the heels of the revelation, first reported by Politico, that the EPA and the White House tried to suppress a report from the federal Agency for Toxic Substances and Disease Registry, or ATSDR, that calculated safety levels of certain PFAS chemicals that were up to 10 times lower than health advisory levels that the EPA set in 2016.

According to an email written by an unnamed White House aide and forwarded on January 30 by James Herz, associate director for natural resources, energy, and science at the White House Office of Management and Budget, the Defense Department contacted the White House Office of Intergovernmental Affairs because of concerns about a draft toxicological profile of PFOS, PFOA, and two other PFAS chemicals that ATSDR was preparing to release. The safety levels ranged as low as 12 parts per trillion, considerably lower than the 70 parts per trillion levels that the EPA set for both PFOS and PFOA in 2016.

“The public, media, and Congressional reaction to these numbers is going to be huge,” the White House aide predicted in the email, which the EPA made public in April in response to a Freedom of Information Act request by the Union of Concerned Scientists. “The impact to EPA and DOD is going to be extremely painful. We (EPA and DOD) cannot seem to get ATSDR to realize the potential public relations nightmare this is going to be.”

No doubt the EPA and Defense Department would have received plenty of unwelcome media attention had ATSDR released the study as planned. The proposed safety levels indicate that levels of the chemicals the EPA previously deemed “safe” may actually harm people. But the press coverage of their efforts to suppress the study has been arguably worse, with the Washington Post observing that the EPA’s behind-the-scenes work to downplay the dangers of the chemicals makes the agency look “secretive and uncaring” and Politico suggesting that the move to quash the study may be more damaging to Scott Pruitt than his ethics scandals.

But there is far more at stake in the controversy over safety thresholds than optics or headlines. The ATSDR’s numbers, which were calculated based on the chemicals’ effects on the immune system, a more sensitive impact than the EPA used to derive its own limits, recognized that human health effects can occur at extremely low levels of exposure, which are present on and near many military installations where firefighting foam containing PFAS was used.

The Defense Department, which is responsible for hundreds of these sites, has much to lose from the ATSDR’s proposed risk levels, which could ultimately be used to calculate safe water levels and engineering standards that would guide the cleanup of these sites. Already, the cost of cleaning up the bases and surrounding areas to the EPA’s current standards has been estimated in the billions of dollars. Lowering the acceptable level of the chemicals further could add billions more to cleanup costs.

And because ATSDR’s report, which was drafted last May, also included evaluations of the toxicity of two other PFAS chemicals — perfluorononanoic acid, or PFNA, and perfluorohexane sulfonic acid, or PFHxS — it could hasten the addition of those chemicals to the list of chemicals the Defense Department has to remediate. Currently, the Pentagon is only attempting to measure and address the two best known in the class, PFOS and PFOA.

ATSDR’s numbers also suggest that levels of the chemicals already present in many parts of the United States are dangerous. “As the toxicological values continue to come down, we’re going to realize that there are more areas of concern than we originally suspected,” said Summer Streets, an environmental research scientist at the Minnesota Pollution Control Agency. Minnesota, where 3M, which makes PFAS, is headquartered, has several bodies of water, including parts of the Mississippi River, in which the level of the chemicals is significantly higher than the safety level proposed in the ATSDR report.

The potential consequences of recognizing the breadth of this health threat go beyond the military. Should the ATSDR publish its report, which some congressional Democrats have already demanded, anyone who has put PFAS into the environment could be held responsible for cleaning it up.

Outrageous. In fear of a “public relations nightmare,” the White House and @EPAScottPruitt are failing to protect public health. Victims of PFOA and PFOS contamination, and their families, deserve answers. This report should be released immediately. https://t.co/mFGKjN6575

“It shows we’re finally inching closer to the stage where we might get a regulatory standard on a federal level,” said Rob Bilott, the attorney who brought the chemicals to the attention of the EPA and the rest of the world 18 years ago. “That could trigger not only the ability of communities and citizens to enforce these standards to get clean water, but also massive cleanup liabilities. You’re talking about global contamination on a pretty unprecedented scale.”

Some scientists who have studied the chemicals see the ATSDR’s proposed numbers as long-awaited vindication. “I’m immensely pleased,” said Philippe Grandjean, a toxicologist and physician who co-authored a study in 2013 showing that PFAS chemicals weakened children’s immune responses. Based on that and other research, Grandjean issued a warning that PFAS limits for drinking water were far too high. Although Grandjean sent his research to the EPA, the agency declined to consider it when setting its health advisory levels in 2016.

“They did not use the results because they felt we were just looking at associations,” said Grandjean. “In my mind, this is an unreasonable critique because the only way we could get proof would be to experiment with our children.” Grandjean said he recognizes that directly administering PFAS to children in experiments comparable to those done on lab animals would be unethical. “But that’s what we’re doing now because we continue to allow our children to be exposed to doses that affect their health without monitoring.”

Grandjean said that the EPA had evidence that PFAS chemicals cause immune dysfunction well before his 2013 study. “EPA knew since 2000 that the immune system in monkeys was very susceptible to PFOS and PFOA,” he said. While the ATSDR is catching up with research on PFAS, according to Grandjean, “EPA today is at least 10 years behind the scientific evidence.”

Were they to attend the PFAS summit, Grandjean and Bilott would no doubt have much to share about the chemicals, but neither was invited to participate. While Maureen Sullivan, deputy assistant secretary of defense for environment, safety, and occupational health, is scheduled to speak on behalf of the Defense Department, representatives of ATSDR and any other division of the Department of Health and Human Services were, until recently, notably absent from the agenda. On Wednesday, Patrick Breysse, director of ATSDR, was added to the agenda.

Had she been able to attend, Mello had plenty she wanted to say. Because her hometown owns the land that is the source of her local PFAS contamination and rents it to the National Guard, Westfield has wound up with the financial burden of cleaning up the chemicals. She wanted to ask the EPA to move forward with regulating PFAS, which could help the city in its ongoing battle with the National Guard over cleanup costs.

“Without the EPA’s help, not only are we sick, but we — the victims — have to pay to clean it up,” said Mello. “My goal was to go and beg them for help and we’re not even invited. I’m furious.”

Thursday night at 7 p.m., after being repeatedly asked about its failure to include community groups, the EPA invited Andrea Amico, founder of Testing For Pease, a community group in Pease, New Hampshire, to attend the PFAS summit.