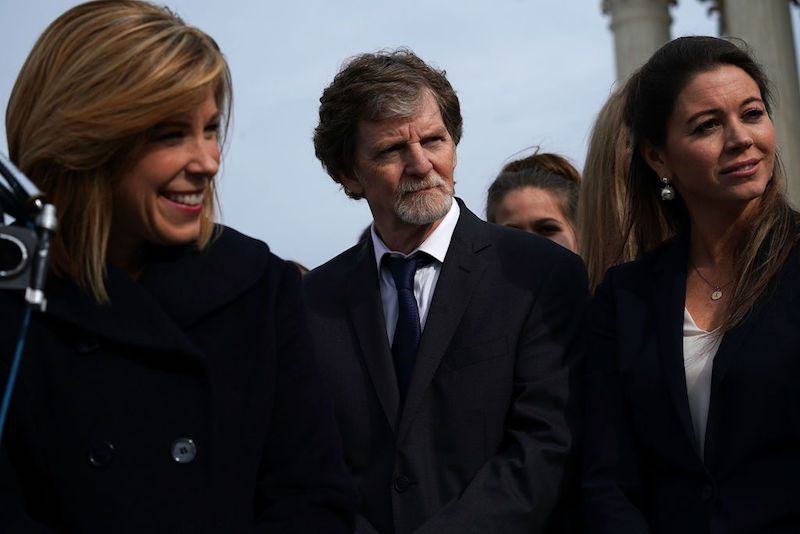 In today’s Supreme Court decision in Masterpiece Cakeshop v. Colorado Civil Rights Commission, baker Jack Phillips won absolution from legal liability for refusing to sell a wedding cake to a gay couple. On the surface, the 7-2 decision, written by Justice Anthony Kennedy, appears to not be the disaster that many LGBTQ rights advocates had feared. It is limited to the specific facts of this case, where the majority found that statements of some commissioners, along with the commission’s treatment of discrimination claims brought by another customer who claimed that secular bakers refused his requests to bake cakes with homophobic messages, were evidence of the government’s “hostility” to Phillips’s religion. A different case, without those particular facts, could lead to a different result.

So while the decision is not a sweeping exemption from anti-discrimination laws, as some on the right had hoped, it’s hardly a harmless bump on the road to full equality. Less noticed, perhaps, but no less crucial to Phillips and his allies was how assiduously Justice Kennedy labored to find government “hostility” to Phillips’s religion, and therefore a violation of his free-exercise rights.

Kennedy’s decision demonstrates that this Court has absorbed some of ADF’s arguments about the supposed conflict between LGBTQ equality and religious liberty, and has adopted a potentially wide-ranging definition of government “hostility” to religion. If the Court can accept claims of government “hostility” on the tepid evidence on offer in Masterpiece, it will embolden other Jack Phillipses to refuse to serve LGBTQ customers, and to hope for a “slip-up” by a public official as uncontroversial as “religion should not be used as an excuse to discriminate.”

Just three years ago, Kennedy inflamed Christian-right activists with his majority opinion in Obergefell v. Hodges, making marriage equality the law of the land. But today he may have redeemed himself in their eyes by breathing new life into their claims that laws barring discrimination based on sexual orientation are at odds with religious liberty.

In the six years it took to wind its way through the legal system, Masterpiece became the cornerstone of this Christian-right public-relations campaign. In 2012, David Mullens and Charlie Craig, a gay couple, had visited Phillips’s shop to inquire about a cake celebrating their wedding; Phillips refused, claiming it violated his sincerely held religious convictions against same-sex marriage. Mullens and Craig sued under Colorado’s public-accommodations law, which prohibits discrimination on the basis of sexual orientation. The Colorado Civil Rights Commission found in their favor, as did the Colorado Court of Appeals. Phillips and his attorneys at Alliance Defending Freedom litigated the case to the Supreme Court, which today found that the commission had violated Phillips’s constitutional rights.

At oral arguments last December, Kennedy fixated on one statement by a single member of the Colorado Civil Rights Commission, who had simply observed that religion had throughout history been used as “an excuse to hurt others.” In his opinion today, Kennedy focused again on that same statement, along with the commission’s decision finding no violation of the state non-discrimination law in the case of a customer named William Jack. Three separate bakers had refused Jack’s requests for cakes with Bible images and homophobic messages on the grounds that they found those messages derogatory. Jack claimed he was refused service because of his religious beliefs.

That difference in treatment, though, is based on how non-discrimination laws work. As Justice Ruth Bader Ginsburg pointed out in her dissent—in which she was joined by just one other justice, Sonia Sotomayor— Jack’s claim “scarcely resembles Phillips’ refusal to serve Craig and Mullins: Phillips would not sell to Craig and Mullins, for no reason other than their sexual orientation, a cake of the kind he regularly sold to others.” In contrast, the secular bakers would have refused to bake the homophobic cakes for any customer, thus not violating Jack’s right to be free from discrimination. Jack, Ginsburg wrote, “suffered no service refusal on the basis of his religion or any other protected characteristic. He was treated as any other customer would have been treated—no better, no worse.”

In his opinion, Kennedy cites Church of the Lukumi Babalu Aye v. City of Hialeah, a 1993 case in which the Court found a free-exercise violation when a city council passed a resolution that appeared to be aimed at barring the animal-sacrifice ceremonies of a minority religious sect, writing that the Colorado Civil Rights Commission was therefore “obliged under the Free Exercise Clause to proceed in a manner neutral toward and tolerant of Phillips’ religious beliefs.” But in Masterpiece, there was no evidence that the Colorado legislature passed the civil-rights law with any hostility towards religion; instead, Kennedy is arguing that the conduct of the commissioners in enforcing the law can be examined for evidence of such hostility.

What will be the evidence of such supposed animus in the next case? A question from a judge at oral arguments? Deposition questions by government attorneys? That is the crucial open question from Masterpiece—not whether the next case will be more winnable for a gay couple without Masterpiece’s specific facts, but how hard opponents of LGBTQ rights will work to convince the courts that similar specific facts exist in that case, too.

Today, the Court did not foreclose LGBTQ people from suing under anti-discrimination laws. But it did open the door for ADF to use one of its favored tropes—that the government is hostile to religion—to continue to chip away at those protections. And there is really no telling how that will turn out.

This article first appeared in the Nation and is published here with permission.

Sarah Posner is a reporting fellow with Type Investigations and author of God's Profits: Faith, Fraud, and the Republican Crusade for Values Voters