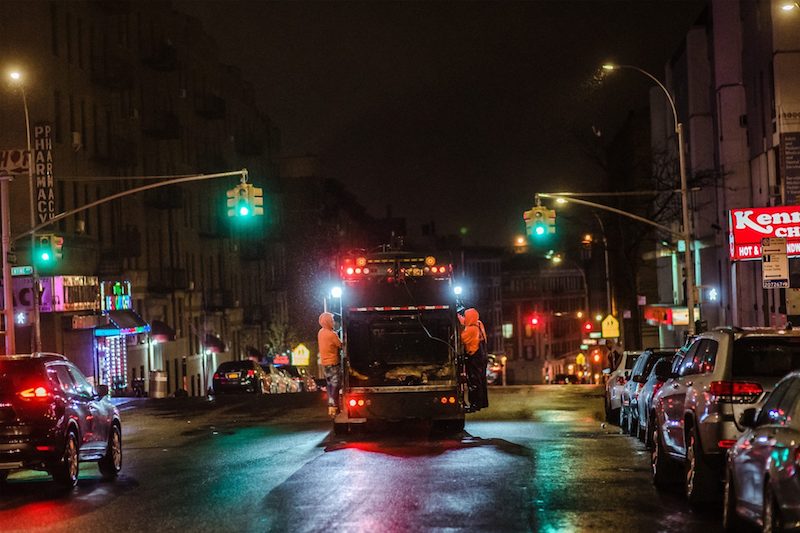 Ryan Christopher Jones/ProPublica
A Sanitation Salvage truck picks up garbage on 188th Street in the Bronx.

This story was originally published in ProPublica.

It was shortly after 9 p.m. on Aug. 8 when a private sanitation truck headed up East 169th Street in the Bronx and drove into oncoming traffic. The truck smashed head-on into a sedan, sending it 25 feet down the block and into another parked car, triggering the sedan’s airbags, according to the police report. The garbage truck wound up crashing into a second parked car before coming to a stop.

Soon, a man emerged from the cab of the garbage truck. The vehicle belonged to Sanitation Salvage, one of the largest private trash haulers in the city, whose safety record and wider operations are being investigated. The man, it turns out, never should have been driving the truck.

“I don’t have a license,” the man said frantically.

Two other men who had been on the back of the garbage truck approached, and the man who had been behind the wheel began to plead with them, according to a witness.

“Yo, take the rap for me,” the man told one of his colleagues, according to the witness, Mario Anthony. “I’m going to lose my job.”

The police report of the accident identified the unlicensed driver as James Harris, 35. No charges were filed, and Harris was let go with a summons for the unlicensed operation of a commercial vehicle. The victim in the sedan, Michael Solis, was removed from his mangled vehicle by firefighters and taken to Lincoln Hospital, where he was treated and released.

In a statement last week, a spokesman for Sanitation Salvage said Harris had been fired.

“Sanitation Salvage strictly prohibits unlicensed personnel from operating its commercial vehicles,” the statement said. “Toward the start of an evening shift comprising approximately 450 route stops, a helper employed by the company entered the cab of a company garbage truck and, without authorization, began to drive the vehicle, resulting in the accident. Sanitation Salvage immediately fired the individual and is exploring further legal action against him. Safety has been and continues to be the company’s priority.”

In an interview last week, Harris said he had jumped behind the wheel in an attempt to avoid an accident. Harris said the truck’s driver was new and had forgotten to put the vehicle in neutral as the driver, Harris and the other helper loaded trash into the back. The truck began to pull away, Harris said, and that’s when he got in the cab.

“I was trying to stop the truck,” Harris explained later by phone. “I wasn’t driving the route. I know better than that.”

“I made a stupid mistake,” Harris added. “I should’ve let [the driver] smash up the truck.”

Solis, whose car was hit by the truck, declined to comment when contacted at his home.

The scene in the Bronx early this month was the latest in a string of accidents involving Sanitation Salvage, one of the hundreds of private trash companies whose trucks zigzag across the city nightly to collect waste from commercial businesses in all five boroughs. ProPublica previously reported that Sanitation Salvage has a track record of labor and safety violations. According to current and former workers, the company’s truck drivers and their helpers work grueling shifts of 18 hours or longer, aided by an army of off-the-books workers often hired informally off the streets along the collection routes. Workers said the company installed what they called a sham union that served the interests of Sanitation Salvage’s owners, and records show the union was long run by a mobster: James Bernardone, identified by law enforcement as a soldier in the Genovese crime family. The city agency that oversees the private trash industry was created to root out organized crime and corruption.

Sanitation Salvage trucks killed two men between November 2017 and April 2018. The driver behind the wheel for both fatalities initially told police that the first person killed was a homeless man in the Bronx who jumped aboard the moving truck and was run over. But reporting by ProPublica showed that the man, 21-year-old Mouctar Diallo, was in fact an off-the-books worker for Sanitation Salvage and his death was covered up.

The driver, Sean Spence, was allowed to stay behind the wheel for the company even after the agency that regulates the private sanitation industry learned he had lied about the death of Diallo. Six weeks after the agency learned of his deception, Spence struck and killed an elderly man in the Bronx. He was then suspended from driving, and this month the oversight agency, known as the Business Integrity Commission, or BIC, barred him from working in the industry.

Gary Rothman, a lawyer for Spence, said Spence was “upset from having been involved in two serious accidents” and had “decided to withdraw from the garbage collection industry and move on with his life. He did not oppose the BIC’s actions.”

“BIC’s decision to ban the driver who was behind the wheel is a step, but real accountability here lies with the company,” said Maritza Silva-Farrell of Transform Don’t Trash NYC, a coalition that advocates for reform in the private sanitation industry. “Mouctar Diallo worked for Sanitation Salvage for over a year, but his death was covered up and the driver was allowed to keep driving until he ran over another New Yorker.”

On March 15, Spence admitted to the BIC’s investigators that his tale of the homeless man was untrue, according to the agency’s written determination barring him from the industry. By the BIC’s account, the agency waited until May 1 to begin a background investigation of Spence. When asked by ProPublica why it had taken six weeks to take action against Spence, BIC spokeswoman Natalie Grybauskas said, “We don’t intend to comment on the details of how BIC conducts investigations.”

Daniel Brownell, the BIC’s commissioner, said in an interview this year that the agency was investigating Sanitation Salvage’s operations. The company is owned by three Squitieri brothers, members of a Bronx family that has been active in the worlds of trash and Bronx politics for years. The family has long donated generously to local politicians.

The company has failed to respond to repeated and lengthy questions about its business practices, safety record and political contributions.

Amid calls by some politicians and advocates last spring for the BIC to revoke the company’s license, Sanitation Salvage issued a statement: “Our operation is predicated upon three important principles: 1) safety, first and foremost; 2) fulfilling a crucial need for our customers and the city; and 3) being a good neighbor. A complete review of our record and operation will show that we live by these principles and a revocation of our ability to do business is unwarranted.”

Kajeem “Q” Hill, who worked as a helper at Sanitation Salvage until 2012 and who currently works as an organizer for Laborers Local 108, said unlicensed helpers jumping behind the wheel of the company’s trucks was not uncommon. He said he once drove a company truck without a license because his driver was falling asleep at the wheel at green lights.

Tom Corsillo, who had issued the statement from the company last week, denied that.

“I’d refer you to the statement, which I think addresses this insomuch as it notes the company strictly prohibits unlicensed personnel from operating its commercial vehicles, makes it clear that safety is the company’s priority and indicates this incident took place toward the start of a shift and not as a result of fatigue,” Corsillo wrote in an email.

Harris, the fired Sanitation Salvage employee, said he had a young child and was seeking to get his job back.

“I’m not trying to get my company in trouble,” Harris said. “I was there almost six years. It’s hard out here, especially for a black dude, with no school or nothing. That’s all I have.”

Nate Schweber contributed to this report.