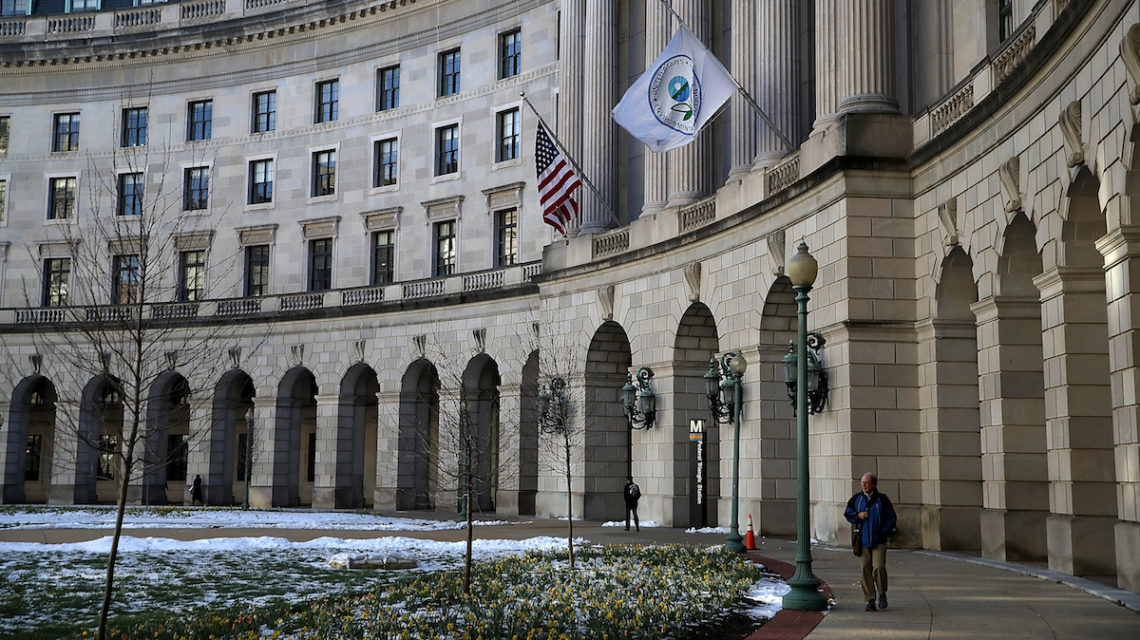 Justin Sullivan via Getty Images
A view of the U.S. Environmental Protection Agency (EPA) headquarters on March 16, 2017 in Washington, DC.

While one branch of the U.S. government issued a report last week outlining the grave threats posed by climate change, another branch was preparing a rollback of water protections that will further exacerbate some of the climate-related problems laid out in the report.

“Water security in the United States is increasingly in jeopardy” warn the authors of the Fourth National Climate Assessment. Issued the day after Thanksgiving, the 1,656-page report was written by a team of more than 300 experts from the government and the private sector, and looks at the wide-ranging impacts of climate change already underway, including its effects on air quality, forests, coasts, transportation, and agriculture.

The report details the role that climate change, including increasing temperatures and more variable precipitation, has played in water quality crises across the country, such as outbreaks of harmful algae in Lake Erie, the reductions of the Pacific salmon population in the Northwest, and droughts in California. In many parts of the country, particularly the Southwest, groundwater has been seriously depleted, causing some rivers and streams to run dry for part of the year.

Yet the Trump administration is poised to issue a regulatory rollback that will make this already alarming situation much worse. The Environmental Protection Agency is expected to release a rule replacing water protections for many waterways across the U.S. The new rule, based on an executive order Donald Trump issued in February 2017, will likely take federal protections away from these tributary rivers, streams, and wetlands that are seasonal and rain-dependent.

Though a growing number of waterways may run only a few months a year, such streams and rivers impact 58 percent of the drinking water in the continental United States, supplying more than 117 million people, according to EPA calculations.

The deregulation of seasonal waterways could also worsen flooding. The water rule put in place in 2015 by the Obama administration, now in effect in 22 states, deters the development of streams and rivers, which absorb rainwater, runoff, and pollution during storms. But without the federal protections, these waters may be more easily filled in and paved over.

Proponents of the rollback, which include oil and gas companies, real estate developers, big agriculture, and the mining industry, have insisted for years that regulating seasonal waterways amounts to government overreach. The oft-repeated industry argument was that the 2015 rule, which sought to clarify which waters were subject to the Clean Water Act, would have applied to a mud puddle, as the Waters Advocacy Coalition, an industry group that has spent more than $1 million on lobbying, has argued.

But scientists say that even if they run only intermittently, seasonal waterways wind up affecting entire watersheds. “When they do run, that water goes downstream to lakes to larger rivers and streams that we do care about because they’re sources of drinking water,” said Daniel Allen, an assistant professor of biology at the University of Oklahoma, who is among a growing group of researchers who study seasonal streams.

“We’re just beginning to understand how they contribute to water quality downstream,” said Allen. “And now we’re taking that away before we have even figured out how to manage them more effectively.”

Meanwhile, our prospective weather forecast is hotter, drier — and scarier. We’re already seeing dramatic changes in climate compared to the last century, according to the report. “Paleoclimate analyses and climate projections suggest persistent droughts and wet periods over the continental United States that are longer, cover more area, and are more intense than what was experienced in the 20th century. An evolving future, which can only be partially anticipated, adds to this risk.”

One thing seems clear: Climate change will further threaten our water. Higher temperatures will continue to increase the need for water, both because of human consumption and greater evaporation in farming. And that need will cause more people to tap into groundwater, which is already heavily depleted in parts of the country. Eventually, the report states, “increased future demand due to warming could exceed future supply in some locations.”

Asked about the climate assessment, which predicted that climate change will have severe impacts on the economy, Trump said “I don’t believe it.”

For those who do believe the science and are interested in mitigating the coming disaster, the report also includes a detailed road map for water management that recommends planning for a wide range of possible future climate conditions. The authors recommended updating policies using the best available science. Yet we’ll soon see the EPA do just the opposite.