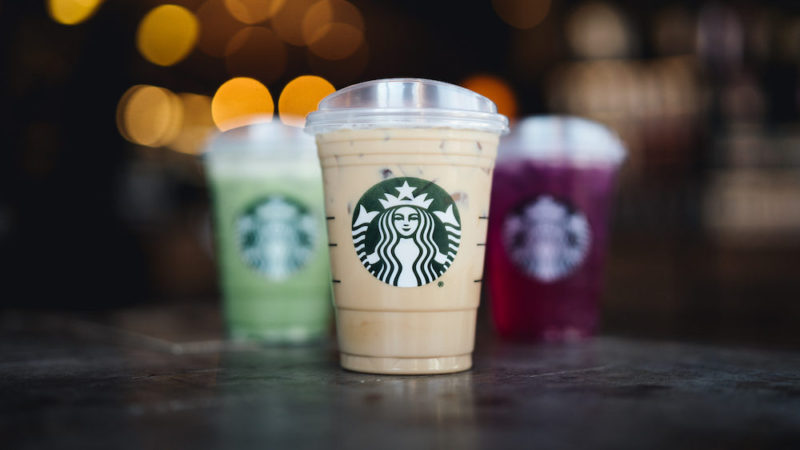 The new Starbucks coffee cup lid, which is being rolled out with great green fanfare in six cities this summer, was supposed be an environmental milestone. Starbucks promised that its latest design innovation, a “clear, recyclable” plastic drink cap that funnels liquid through a slightly raised area, would soon replace more than a billion plastic straws each year.

“By nature, the straw isn’t recyclable and the lid is, so we feel this decision is more sustainable and more socially responsible,” wrote Chris Milne, director of packaging, sourcing, and print production for Starbucks, in press materials. “Starbucks is finally drawing a line in the sand and creating a mold for other large brands to follow. We are raising the water line for what’s acceptable and inspiring our peers to follow suit.”

Starbucks did not respond to inquiries for this story.

But while the revamped plastic lid can theoretically be repurposed into new products, the reality is that it almost certainly will not be recycled. The lids are made from polypropylene, only 5.1 percent of which was recycled in the U.S. in 2015, according to the most recent data from the Environmental Protection Agency. (Just over 9 percent of all plastics were recycled.) And that was before China, which had been processing most U.S. plastic waste, including polypropylene, stopped accepting the vast majority of such waste in January 2018.

Since then, polypropylene, which is categorized as “No. 5” by recyclers, has become even less likely to be recycled. That means that the vast majority of these lids will not be repurposed — Starbucks operates in 75 countries but has cup recycling goals only for the U.S. and Canada. Instead, some of the cups may be incinerated, an outcome that presents environmental and health threats. Others will be strewn about as litter on land or in waterways. Most will ultimately make their way to landfills. The estimates of how long it takes for polypropylene to break down vary from decades to hundreds of years. Either way, the lid will last far longer than the buzz from your caramel cloud macchiato.

Well before China banned imports on most plastic waste — and caused the U.S. recycling market to crater — many recyclers had considered the process of converting used polypropylene products into reusable plastic too costly to be profitable. In many cases, the sorting, cleaning, and melting made recycling polypropylene more expensive than creating new polypropylene. And in the past six months, the price of new polypropylene has dropped further, making the market for the recycled plastic even worse.

Without buyers, some cities and towns have stopped recycling No. 5 plastics altogether. Hawaii County, for instance, recently phased out polypropylene recycling. And Prince William County, Virginia, which has at least 20 Starbucks stores, has stopped the recycling of plastics Nos. 3 through 7. As of March, 26 Oregon recyclers had gotten permission to landfill plastics when they have no other option.

As the waste piles up and the myth of recycling breaks down, PR about the sustainability of plastics has helped keep sales strong. “In these fast food, on-the-go situations, companies are telling people products are recyclable to ease their consumption guilt,” said Jan Dell, a chemical engineer and founder of the Last Beach Cleanup. The positive spin on recycling also helps undermine legal efforts to reduce plastic production, said Dell: “Companies are promoting the recycling of products so they’re not banned.”

Starbucks is by no means the biggest offender when it comes to the casting of plastic as a solution to our plastics problem — or the dissemination of plastic waste. Though some of the company’s cups and lids have been collected in beach cleanups around the world, far more trash can be traced back to other companies, such as Unilever, PepsiCo, and Proctor & Gamble, according to a brand audit conducted by organization Break Free From Plastic.

With its pledge to stop using plastic straws in more than 30,000 stores by next year, Starbucks is ahead of other fast food companies, most of which have made no real progress in addressing their contribution to the plastic pollution problem.

But the company’s glowing rhetoric about its sustainability practices, including its “greener cups and packaging initiative,” has invited sometimes unfavorable comparisons with reality. In 2008, for instance, as part of Starbucks’s “Shared Planet” initiative, then-CEO Howard Schultz pledged that 25 percent of Starbucks cups would be reusable by 2015. More than 10 years later, less than 2 percent of its drinks are sold in reusable cups.

In March, the shareholder activist group As You Sow put forward a resolution to push the company to recommit to its reusable cup goal and, more generally, to step up the scale and pace of its sustainable packaging initiatives.

The resolution, which noted that Starbucks has helped foster “a wasteful ‘to go’ disposable coffee cup culture,” passed by more than 44 percent.