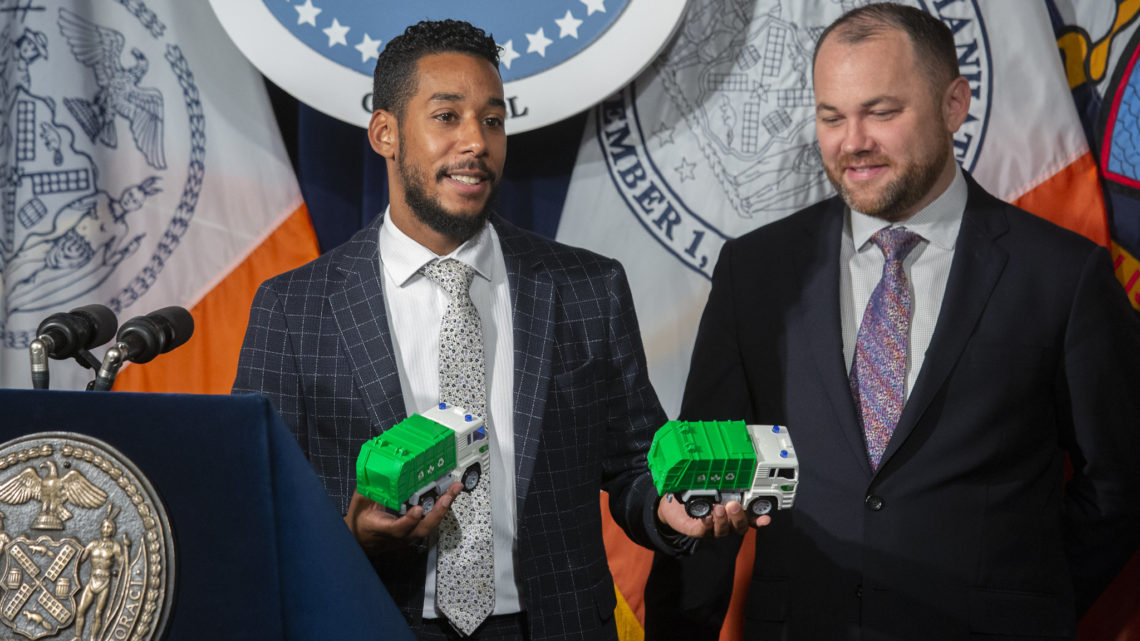 The New York City Council approved a long-debated proposal last week to break up the city into at least 20 zones for commercial waste collection. The passage comes after six years of sustained pressure from a coalition of labor and environmental groups seeking to replace the current system in which garbage trucks from competing companies traverse the city each night to pick up garbage from businesses. That system, they say, results in trucks driving 18 million extra miles a year, with harmful impacts on air quality, the environment, pedestrian safety, and workers.

Labor conditions in New York’s commercial waste industry have come under increasing scrutiny following a joint investigation by Type Investigations and ProPublica in January 2018. The investigation, by reporter Kiera Feldman, found that private sanitation trucks are far more deadly both for workers and pedestrians than the municipal sanitation trucks that pick up residential garbage. Pay, benefits, and safety standards were all found to be substandard: fifty-three percent of government safety inspections of the trucks of the 50 biggest companies resulted in the vehicle being declared unsafe to drive. Private carter employees often work 10-14 hour overnight shifts, driving dozens of miles back and forth on routes that sprawl across the city.

Following the investigation, a federal grand jury launched an investigation into the LIFE 890 union, which represents workers at several major garbage companies, and the City Council opened an investigation into one of the city’s regulatory agencies, the Business Integrity Commission. Now, advocates believe they have struck a final blow against the old system of commercial waste collection with the bill, which POLITICO calls “the most significant reform of the city’s commercial waste industry” since the 1990s.

In addition to creating zones, the legislation would allow no more than three companies to operate in each zone, chosen through a competitive bidding process that would take into account a host of factors including price, labor standards, and environmental sustainability. It could be difficult under this new system for some of the city’s smaller private carters to win bids under the zoning system. But for labor advocates, restricting the number of carters operating in each area of the city and granting contracts through a holistic process is a boon: “Instead of a race to the bottom, with bad companies undercutting good companies, all private carters will be held to the same high standard,” said Sean Campbell, President of Teamsters Local 813, one of the groups pushing for the bill. In order to protect smaller carters, the city will not allow any one company to operate in more than 15 zones.

A handful of councilmembers spoke against the proposal on Wednesday, alleging that it would increase waste removal costs for small businesses and kill jobs. “City council should not be regulating jobs and opportunity out of existence, especially for our city’s most vulnerable workers,” said Councilmember Robert E. Cornegy, Jr. In 2018 Cornegy and a colleague introduced legislation that would have blocked commercial waste zones; emails obtained via public records request suggest the legislation was drafted by industry lobbyists, according to reporting by Kiera Feldman. In June of this year, New Yorkers for Responsible Waste Management, a trade group made up of over a dozen of the city’s waste carters, testified against the waste zone proposal, saying that smaller carters “are going to be swallowed up and they are going to be not able to employ workers.”

The Department of Sanitation has said of its own 2018 waste zoning proposal—which allowed up to five vendors in each zone, rather than three—that there would not be significant job losses associated with commercial waste zones. The council bill’s lead sponsor Councilmember Antonio Reynoso has said that companies that remain competitive by jeopardizing worker safety shouldn’t stay in business. Under the new law the sanitation commissioner would have regulatory oversight over almost all aspects of the vendors’ performance, and the authority to impose fines.

With Mayor de Blasio in favor of the policy, commercial waste zones are set to become law, signaling the end of a bloody chapter in the history of the industry.