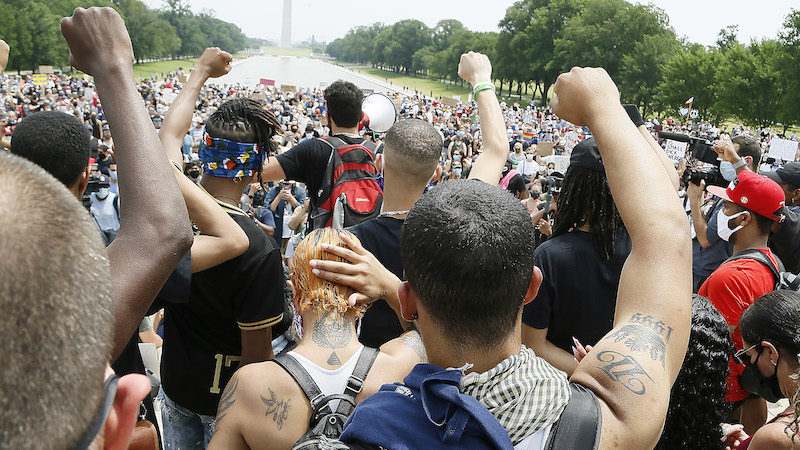 Paul Morigi/Getty Images
Demonstrators gathered at the Lincoln Memorial during a protest against police brutality and racism on June 6, 2020.

“A riot is the language of the unheard.” - Martin Luther King Jr.

I was stunned into hand-over-mouth silence as I sat on my couch watching the murder of George Floyd, an unarmed Black man, killed by a white police officer in Minneapolis, Minnesota. I avoided watching the video for two days. As a journalist reporting on criminal justice, I'd seen enough grotesque disregard for Black life on video. Sometimes I watch and share videos of police violence and sometimes I refrain, afraid of becoming a voyeur of Black death, worried I'll traumatize the already emotionally burdened people on my timeline. Mostly, I think of slain 14-year-old Emmett Till and his mother’s choice of an open casket. I think of how the country needs to see its own inhumanity.

Derek Chauvin, the former officer that killed George Floyd, casually rested his hand in his pocket as he pressed his knee into George Floyd's neck for nearly nine minutes as Floyd managed to say “I can’t breathe.” I needed to see that video even if it would summon a rage I wasn’t sure I could quell, the same rage that has exploded all over the world in protests against police brutality and systemic racism toward Black people.

In a group chat during the first days of the demonstrations, my white European friend bemoaned the idea of protests that involved destruction of property or forms of theft, arguing that “ransacking stores doesn’t lead anywhere, it’s useless rage that actually backfires.” This is a friend I love and respect and yet neither she nor any white person should tell a Black person how we should express or contain our rage. After explaining how America’s history of white supremacy and structural inequality has disenfranchised Black people, I sent her an image. It was a photo of one of the burning buildings in Minneapolis. I said, “Imagine that fire inside your body and no ocean to jump in, just a single bottle of water to cool off.” That is what justice has looked like for Black people, a splash every now and then meant to reduce the raging fire to an ember.

Now, two weeks later, protests are still going strong, and what she called “useless rage” has led to palpable reforms. The officers responsible for George Floyd’s murder were arrested and charged. The Los Angeles mayor announced plans to slash the LAPD budget by as much as $150 million, and the Minneapolis City Council announced it will disband the city’s police department. In Washington, D.C., Mayor Muriel Bowser renamed the street outside the White House “Black Lives Matter Plaza.” Breonna’s Law, a total ban on no-knock warrants, was passed in Louisville, Kentucky. Confederate monuments, symbols of white supremacy, are being removed. And the music and publishing industries are being called out and challenged to start undoing the historical inequities that continue to disenfranchise Black people. These demonstrations, far from useless, have served as a catalyst for important change.

In some ways, this moment was inevitable. Black people have survived centuries of oppression and fought for freedom, justice, and equality. Yet we remain under siege. Racist exclusionary practices have perpetuated poverty and economic insecurity for decades, and Black people are consistently policed and devalued by many of the country’s most important social institutions: the criminal justice system, the child welfare system, the healthcare system, and the education system. Each institution operates in a way that disproportionately and negatively impacts Black communities.

Why are Black people sicker? Why do we die earlier? We’re often relegated to resource-depleted, racially segregated communities where landfills and factories pollute the water and air. And then, if insured, we experience racial disparities in health care. In our schools, which are consistently underfunded and under-resourced, racial bias leads to disproportionate suspension as early as preschool, and the expulsion of Black students, perpetuating the school-to-prison pipeline. Black children are significantly overrepresented in the foster care system because poverty is often mislabeled as abuse and neglect, which can lead to permanent termination of parental rights. Black boys as young as 10 are perceived by police officers as older and less innocent than their white counterparts, and are more likely to face police violence if accused of a crime. If Black people are arrested, they are far more likely to be charged and, if convicted, they receive harsher sentences. Today, they are locked up at nearly six times the rate of whites.

Imagine that compounded systemic racism slowly sucking the life and prosperity from an entire racial demographic, then add daily racialized violence. Attacks on Blackness are dangerous and consistent, a recent example is Amy Cooper, but there were a slew of white women before her – Pool Patrol Paula, BBQ Becky, Permit Patty, Golf Cart Gail – casually calling the police on Black people knowing their encounter with law enforcement could be deadly. Then there is the action and inaction of local governments: people left to die in prisons during a lethal pandemic, Black men hunted and killed by white men wearing the hood of vigilantism, unarmed Black people killed by police.

What can you do? Listen to those directly impacted. Read so that you’re informed on the history of race, white supremacy and anti-Blackness in this country. Examine your own bias and privilege. Learn what it means to be an anti-racist. If you want to be an active ally, consider advocating for political change. We must unseat prosecutors that fill jails and prisons and increase the racial disparities in our criminal justice system, replacing them with those who will use their power wisely and fairly. We need to end broken windows policing that leads to over-policing and surveillance in poor and minority neighborhoods, and end cash bail that perpetuates poverty and incarceration. We must divest funds from bloated police department budgets and invest in social programs and adequate funding for housing, schools, and health services.

Sylvia A. Harvey is a former Type Investigations fellow and author of The Shadow System: Mass Incarceration and the American Family. You can connect with her on social media as @Ms_SAH.