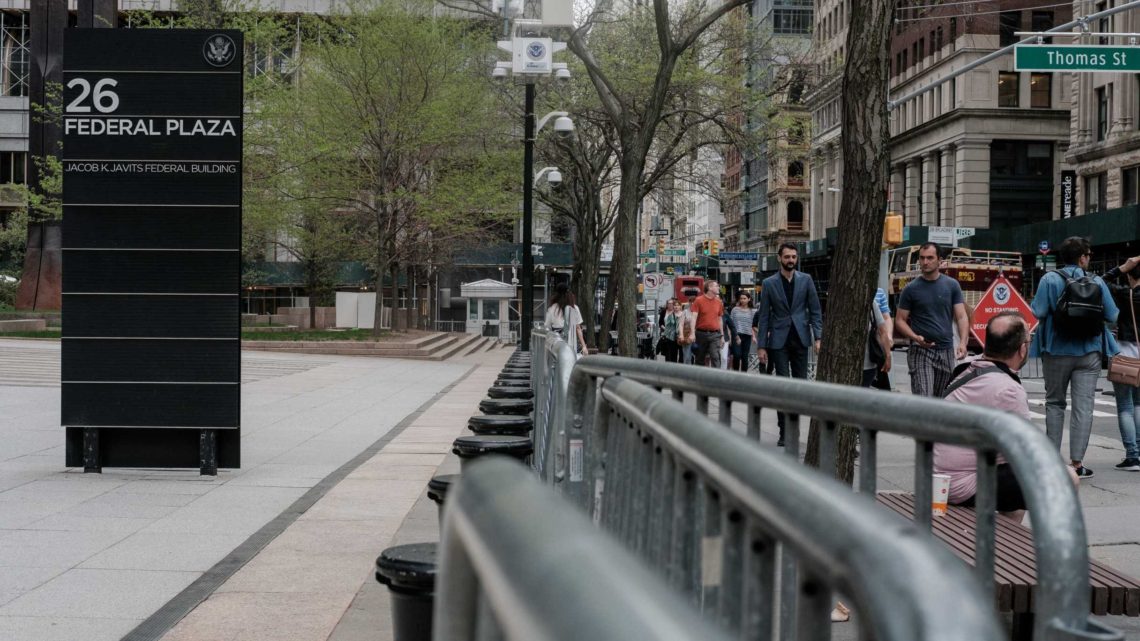 In April last year, Janice*, a Honduran woman from the Bronx, spent more than a week trying to find someone to cover for her at her job as a cleaner so she could attend her individual immigration court hearing at 26 Federal Plaza in Manhattan.

She arrived two hours early for a 10 a.m. hearing, which was delayed until 3:45 p.m. She was applying for asylum and was very hopeful that this would be the day she would receive the right to stay in the U.S. Her case had already been delayed as her attorney had not shown up for her previous hearing a month before, and she was hoping this would be different. Unfortunately not: Janice entered the courtroom and was told by Judge Jem C. Sponzo that her file was lost. At some point between her last hearing and this one it had been misplaced. She would have to wait for her next hearing.

Janice’s case offers just one window into the daily dysfunction of immigration court in New York. Sitting in the courtroom that day was Hannah Beckler, then working as a reporter for Documented. She was part of a team that spent over 90 days reporting in New York City’s immigration courts from open to close from March 2019. They were sent into the court to discover how they had changed under the Trump administration.

Then-Attorney General Jeff Sessions had issued a flurry of policies and legal decisions that upended years of established procedures in the immigration court. We had covered these piecemeal policy measures like many other outlets, with incremental stories about the implementation and the data that came out. However, we wanted to capture what it was like to go through this system under all of these changes.

A team of six reporters went into the immigration courts every day, all day, for three months. They witnessed a system that had long been beset with problems, from case files going missing to scheduling mishaps causing cases to get canceled. But now, an already balky system was placed under enormous pressure. A dramatic increase in the number of cases due to ramped-up enforcement and policies forcing the prosecution of every case had pushed the courts to the very brink.

Their work formed the basis for our partnership with Latino USA. Earlier this year, we published a piece on one couple’s journey through the immigration court and the myriad of difficulties they faced as they navigated the new policies implemented by the current administration. In the second part of that  partnership, we delved into one of those policy shifts: the Matter of Castro-Tum. Sessions issued a legal decision under that name which prevented judges from using a court management tool known as administrative closure, a measure that allowed judges to close cases for a myriad of reasons. Sessions also ordered the reopening of hundreds of thousands of cases that had been administratively closed. One of those cases was Roland Sylvain’s. His case had been administratively closed in 2014 after years of heartache. Thanks to these decisions, he and thousands of others find themselves dragged back into immigration court.

Cases that had been reopened due to Castro-Tum was just one of the many things our court watchers witnessed. Here are some of the other things that they saw during their time in the courts.

The mother of one of the detainees who was supposed to have his case heard traveled two hours from Montgomery, N.Y. to arrive at the court at 8 a.m. A cab driver had charged her $300 and was waiting for her to finish a hearing in which she was hoping her son would be granted bond, she told court watcher Ralph Ortega at the hearing.

Ortega was sitting in the courtroom when Judge Mimi Tsankov tried to call the Orange County jail via a video link to conduct immigration court hearings with people who were detained there on multiple occasions and failed. She ultimately rescheduled all the hearings for detainees at Orange County that day. This meant that the multiple immigrants who were supposed to have their hearings had to spend more time in jail waiting for their next hearing. The detainee’s mother traveled three hours to get to the court, spent the entire day there and $300, only to find out it was all for nothing.

The Trump administration greatly increased the use of video teleconferencing technology in court hearings. The government argues the technology improves efficiency and allows for more cases to be completed. However, our court watchers witnessed that the dated technology used to speed up the hearings actually regularly led to delays.

In New York, the technology is mainly used at the Varick Street Immigration Court, where cases for immigrants who are in detention are heard. Immigrants are beamed in via video link from the jails, as opposed to being shuttled there physically by Immigration and Customs Enforcement. However, judges complained about difficulty connecting to the jails simultaneously, saying they struggled, for instance, to get through to immigrants at the Orange County jail while another judge was trying to at the same time.

Ortega also witnessed the case of a Haitian man from Brooklyn who had Temporary Protected Status; his case had been ongoing for 10 years. During a master calendar hearing, an initial hearing in which a judge outlines why an immigrant is facing deportation and potentially sets the date for a hearing on the merits of their case, in April 2019, the prosecuting attorney for Immigration and Customs Enforcement, Matthew Durkin, could not find his file, meaning he had to wait again. The court watchers witnessed this on multiple occasions. In some instances, the ICE attorney blindly opposed everything that was presented. In others, the case was delayed for hours as the judge and the prosecutor hunted through their files to find it. This is particularly painful for some immigrants because court hearings are often scheduled years into the future.

In addition to ICE attorneys forgetting files, the court misplaces files pertinent to immigrants’ cases. One of these errors resulted in a client of immigration attorney Michael Lichtenberg spending additional weeks in jail. Court watcher Phoebe Taylor-Vuolo was present at the client’s hearing where Judge Lauren T. Faber told Lichtenberg that it appeared that his client could not make bond. “If you grant it, he can,” Lichtenberg said.

“I did grant it. I sent the decision on March 20th,” Faber responded at the hearing on April 26th.

The immigration courts are far from being digitized; most notices and filings are done with physical papers, meaning clerical errors are rampant. The consequences of those errors can often be large for an immigrant going through the system.

The decision appeared to have been sent to an address where Lichtenberg’s client, who was appearing via video teleconference, had not lived in for three years, he said. Faber reviewed her records and found a change of address had been submitted. Lichtenberg’s client had spent an additional month in jail because of the clerical error.

In 2018, the number of families crossing the southern border skyrocketed to unprecedented proportions. In response to that, in November 2018, the Justice Department ordered immigration judges in 10 cities (Atlanta, Baltimore, Chicago, Denver, Houston, Los Angeles, Miami, New Orleans, New York City, and San Francisco) to complete “family unit” cases in one year or less. This docket of cases became known as the “rocket docket.”

The speed at which the cases moved often led to clerical errors, which meant that sometimes, immigrants did not receive notices to appear for hearings at the immigration court. As of April 15, about 72 percent of the 5,913 completed cases in New York resulted in in-absentia deportations; 92 percent resulted in deportations.

Beckler witnessed a series of these removals take place. Judge Jeffrey L. Menkin appeared via a video link from Virginia. Dozens of immigrants were scheduled for hearings that day on this “family unit” docket hearing. A large number were not present and the ICE attorney did not have their files either. The ICE attorney asked the judge if they should schedule another hearing, but they decided to take a half-hour break for the ICE attorney to dig up the files, and then they would proceed. The judge had the option to reschedule the hearings to ensure that the immigrants received their notices or deport them for not appearing. “If they didn't come this time, they're not going to come the next time. We should just clock it out,” Menkin said. All of the respondents who weren’t in the courtroom that day were ordered deported in absentia, many of them children.

Months later, President Trump would announce a nationwide sweep of immigration raids across the country. It later became clear that the target of these arrests would be the people who had received deportation orders in absentia, in hearings such as the one we attended. Because the system is rife with problems, we estimate many of them may  never have known they were even targets.