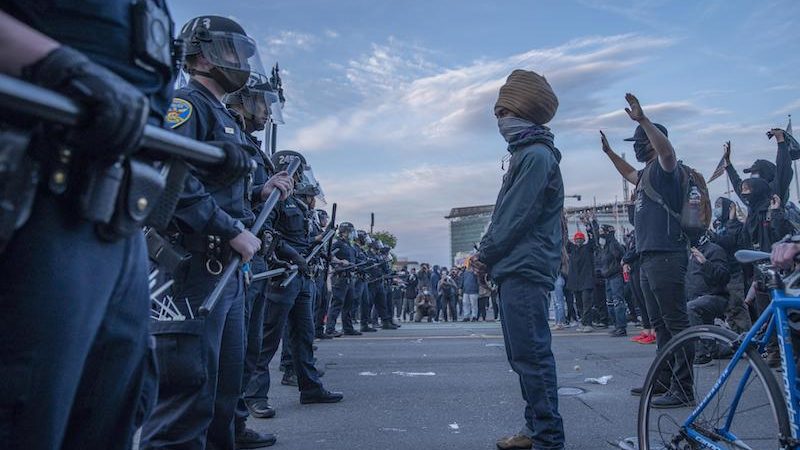 We at Type Investigations want to join colleagues nationwide in condemning the intimidation, detainment, and outright assaults against journalists attempting to do their jobs covering the recent civil disturbances.

Type supports statements from organizations such as the Reporters Committee for Freedom of the Press, Society of Professional Journalists, National Association of Black Journalists and others, calling for an end to aggressive police tactics against reporters, and holding officers whose actions have injured journalists and other citizens accountable.

I heard from far too many former colleagues over the weekend who posted photos or video documenting injuries sustained while covering disturbances around the country. To be clear, I am not saying journalists deserve more respect and protection than anyone else, but when even reporters doing their jobs in full public view aren’t safe from police misconduct, then who is?

And that is the critical message we must not allow to get overshadowed by the almost daily outrages seen on television and in newspapers.

Communities of color have long endured undue scrutiny and misconduct by law enforcement, with only incremental reforms in some communities over the last few decades. It is the frustration over police misconduct witnessed by generations of families that is fueling the emotion seen in America’s streets.

As an African American journalist, it has been difficult to watch the senseless death of George Floyd replayed repeatedly on television and the devastation its aftermath has wrought on dozens of American cities during the last week.

As an African American father, it has been difficult watching the news with my 15-year-old son. Not because he doesn’t understand the underlying issues or the explosions of anger he is seeing displayed during the urban chaos — just the opposite. He knows all about the frustrations of people of color and the uncertainty of interactions with police.

I’ve never really had to have “the talk” with my son about encounters with cops — he’s learned from experience that dealing with police officers can be a life-altering experience — and that it is usually our lives that are at risk.

It was about three years ago this month that my family was moving into our new home in a quiet, tree-lined Detroit area suburb. The moving truck had pulled away, and my wife and son — then 12 years old — stood out in the front yard taking cell phone photos to send to far-flung relatives.

Twenty minutes later, a police officer was knocking at our door.

Perhaps it should not have been my most immediate concern, but I worried that I was wearing the most threadbare, ragged sweatpants and shirt that I owned, as we were still unpacking and cleaning the house.

The officer very politely explained that our neighbors had called 911 to report “suspicious black people” at the house.

I responded that we had just moved in, and that unless photography was a suspicious activity, there were no other people in or around the premises.

To his credit, the officer looked at the unpacked boxes behind me and quickly concluded that this was another instance of “moving while black.” He apologized for the intrusion, with an embarrassed expression that signaled he understood that our all-white neighbors had panic-called 911.

No real harm had been done, but after that day my son no longer talked about wanting to become a policeman when he grew up.

Two years later, the family was boarding a Delta Airlines plane at Reagan National Airport in Washington, D.C., for a return flight to Detroit. I had been unable to book three first-class seats together, so my wife took her place in the second row near the cabin entrance, while I sat next to my son in the fifth row. I had just buckled my seat belt when I looked up and saw two white men standing over my wife. They were hunched over her, standing so close you could see their spit hitting her in the face — yelling at the top of their lungs.

I jumped out of my seat, pushed past the other onboarding passengers, screaming at the men to get away from my wife. They looked but ignored me.

I made my way to the front, told them one more time to back away, and when they failed to comply, I put both forearms firmly into their chests and shoved them out of the row and into the aisle, toward their seats. One stumbled but didn’t actually fall.

There was more yelling and screaming as they drunkenly articulated that we had no right to board the plane before they did.

When the flight crew finally decided to intervene, and it was clear that my wife was safe, I returned to my seat for takeoff. Again, just as I got my seatbelt on, uniformed officers were waiting at the cabin door to escort me off the plane for questioning — the two men had asked that I be arrested.

I hadn’t made it off the plane before my son burst into tears.

I went back to assure him that we hadn’t done anything wrong, that everything would be fine. I tried not to let him hear the uncertainty in my voice as I eyed the six officers who were waiting for me at the door.

I was detained in the jetway for an hour — plane holding at the gate — while I was questioned, accused of assaulting two passengers. And even though fellow passengers volunteered witness statements that the two men had accosted my wife, I was being written up as “the violent suspect.”

I was just about to search my cell phone contacts for criminal defense lawyers when the investigating officer informed me that state law considers verbal threats a form of battery, so charges could also be filed against the two men. By that time, my family had been removed from the plane as well, so my son exited the aircraft in time to see his father standing against a wall, surrounded by police. It was small comfort they hadn’t handcuffed me.

After being informed that they could also face prosecution, the two men bound for San Francisco decided not to press charges. We wanted to get home, so neither did we. So again, an unwelcome interaction with police ended without drama or violence.

We had been kicked off the flight and rebooked, so sitting in the terminal awaiting our next departure, I tried to stress the importance of remaining calm, being clear and concise with statements to officers if he were ever in such a situation, of not bringing emotion into the equation. But his feelings during the incident illuminated exactly what I felt — what millions of black and brown families feel across the nation — that common everyday occurrences can suddenly place you in the hands of police officers, with little or no control over the outcome of those encounters.

It doesn’t take dogs, tear gas, or military-style vehicles rumbling down your block to alter your perception of law enforcement. For many, it is the uncertainty of how they will be treated, whether they are being unfairly targeted, the feeling of helplessness about whether they can keep their loved ones safe from harm due to police misconduct.

Black parents from every walk of life know this kind of anxiety — from college presidents to the former President of the United States — and it is part of the reason our streets are burning each night.

Mark J. Rochester is editor in chief of Type Investigations. He was previously senior news director for investigations at the Detroit Free Press.