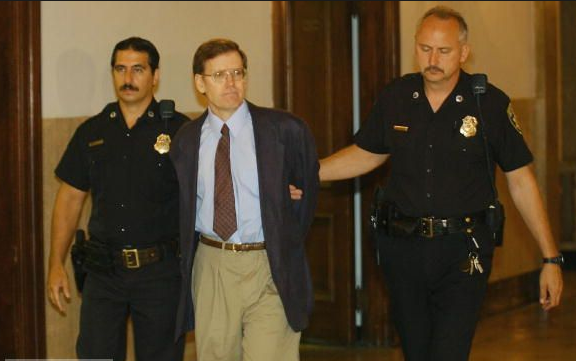 James Kopp is led by into court in August 2002 in Buffalo, New York, to face trial in the murder of Dr. Bart Slepian. | Credit: LIFE.COM

“There is no way I or any other representatives wish to see abortion doctors murdered,” South Dakota State Representative Phil Jensen told a Washington Post reporter yesterday.

That’s why he is considering inserting four words — “that is unlawful and” — to a bill he recently introduced in the Sunshine state’s legislature. Jensen’s proposed law expands South Dakota’s definition of justifiable homicide so that preventing a fetus’ demise would be covered.

“Say an ex-boyfriend who happens to be father of a baby doesn’t want to pay child support for the next 18 years, and he beats on his ex-girlfriend’s abdomen in trying to abort her baby” Jensen said, describing a scenario in which he thinks his proposed law might be useful. “If she did kill him, it would be justified. She is resisting his effort to murder her unborn child.”

But as Jensen learned yesterday, the South Dakota legal code already considers a fetus a person, so the woman in the above scenario never had any legal worries to begin with.

Who does have worries — very, very serious worries — when the words “justifiable homicide” slip close to “fetus” or “unborn child”? Abortion providers.

On October 23, 1998, my uncle Bart — with whom I was very close because he lived with my family for nearly a decade after my father died when I was 4 years old — came home from synagogue services with his wife, Lynne. Bart Slepian was in his kitchen warming up soup in the microwave, talking to his young sons — two of whom were in the kitchen with him and Lynne, and one of whom was in the adjacent den watching the Buffalo Sabres play hockey on TV. There was a ping and a little shattered glass. My uncle said, “I think I’ve been shot.” My aunt said, “Don’t be ridiculous.” And a bloody bullet was ricocheting crazily around the kitchen, then flew right past my 15-year-old cousin’s head into the den where it landed with a bloody thunk in the fireplace. Bart was flat on his back on the floor. Lynne did CPR. One cousin called 911. Another tried to staunch his father’s bleeding with paper towels. But Bart was already dead.

On May 31, 2009, Dr. George Tiller, an abortion provider in Wichita, Kansas was handing out programs next to the donut table at his church when anti-abortion activist walked in and shot him point-blank in the head. Scott Roeder’s defense: justifiable homicide. [See Robb’s investigation of Roeder, “Not a Lone Wolf,” published in Ms. with support from The Investigative Fund.]

I got to know both Kopp and Roeder very well. Each in his own way was a psychologically fragile man who was, for lack of a better description, a walking abortion. Neither had steady work, a single strong relationship, or any meaning in his life outside of his extreme feelings for fetuses. Having interviewed Roeder for more than 20 hours, I really think he was provoked to murder by the loss of his Bronco truck. When he could no longer make payments on the vehicle and had to sell it to some friends (who did not pay what Roeder had expected), he felt unmanned. And how to be really super manly in his world? Kill a doctor.

Just as with Kopp, Roeder’s anti-abortion circle included what I call functional extremists. That is, they work and have families and 401(k)s. They indulge in violent rhetoric, but they leave most of the actual dirty work to others. This group would include those who signed the many iterations of the so-called Defensive Action Statement that declares “the use of lethal force … justified” when trying to prevent abortion, and those who run and have run the anti-abortion group Operation Rescue, some of whom openly support justifiable homicide and others of whom, Roeder claims, privately endorse it.

Elected legislators are supposed to try to elevate the discourse. They are supposed to come up with solutions; to try to make life better. They should take care not to spark the darkest impulses of humanity’s darkest souls. As Jensen pointed out to the Post, “You are going to have crazies out there. Crazies do crazy things.”