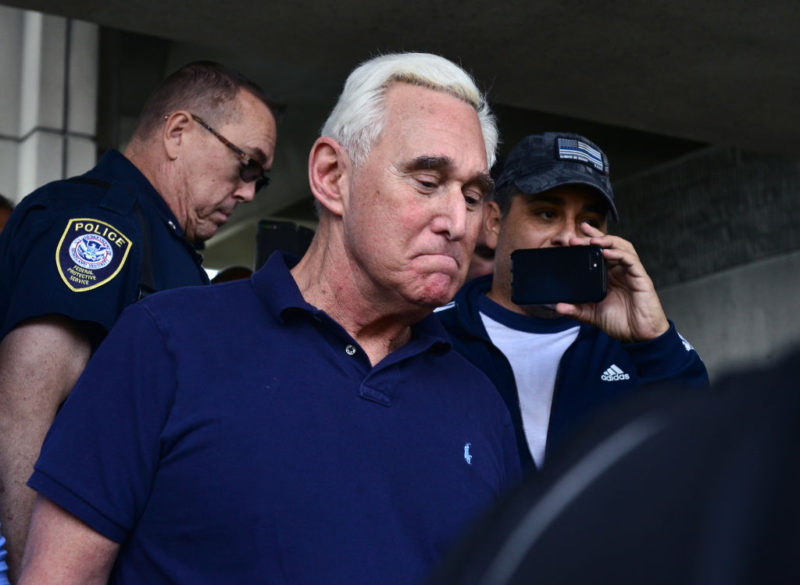 After longtime Donald Trump confidant and advisor Roger Stone was indicted last Thursday, White House Press Secretary Sarah Sanders told reporters, “this has nothing to do with the president, this has nothing to do with the White House.” In the hours after Stone was arrested in an early morning FBI raid on his Florida home, Trump reacted to the news by once again taking to Twitter to call the Mueller investigation the “Greatest Witch Hunt in the History of our Country!” and adding, “NO COLLUSION!” Rudolph Giuliani, the president’s lawyer, characterized the charges as “another false statements case” telling the Washington Post, “the president is safe here.”

Despite the White House’s insistence that the indictment has nothing to do with Trump, Special Counsel Robert Mueller’s indictment of Stone contains new details about Stone’s communications with Trump campaign officials about the release of hacked Democratic Party emails by WikiLeaks, identified in the indictment as “Organization 1.” These new details prompted me to reexamine a speech Stone gave during the Republican National Convention in July 2016, at a rally I was covering. In that speech, he referred to a meeting with Trump campaign staff.

The indictment charging Stone with seven counts of lying to investigators, obstruction, and witness tampering, zeroes in on Stone’s activities during June and July of 2016, two months that are pivotal in the investigation into the Russian hack of Democratic Party servers and the release, by WikiLeaks, of stolen DNC emails. It was during this two-month period that:

On July 18, the day the Republican Convention opened, Stone was slated to be a celebrity speaker at an “America First” outdoor rally, organized by a group calling itself Citizens for Trump, in downtown Cleveland. Stone, who arrived late, was primed to fire up the crowd. After laudatory words for Trump, he launched into a lengthy diatribe against the Clintons, during which he called Hillary Clinton “a short-tempered, foul-mouthed, greedy, bipolar, mentally unbalanced criminal;” dredged up old conspiracy theories that Hillary Clinton had ordered the murder of her husband’s top presidential aide Vince Foster; and called The Clinton Foundation “the largest single money-laundering scheme in American criminal history” and “a slush fund for grifters.” Stone capped this spectacle with a claim that the “email scandal” — a possible reference to the imminent Wikileaks dump — would show that “Bill and Hillary Clinton took money from the Chinese, and from the Russians, and from the Saudis, in return for treason.” The crowd cheered as Stone demanded  “the prosecution of Bill and Hillary Clinton for their crimes.”

Stone then apologized for his late arrival. “I want to apologize for holding you up,” he said, “I had some meetings that I had to conclude over at the Westin with members of the Trump staff.” (The Westin Hotel is where the Trump campaign team stayed during the convention in Cleveland.) Stone did not specify or name the campaign staffers he met with, but he went on, “I have absolute confidence in Donald Trump, I have absolute confidence in Mike Pence, I have no confidence whatsoever in the mainstream media, I have absolute confidence in Paul Manafort, and Tony Fabrizio, and Jason Miller — hardcore, seasoned political pros that will help Donald Trump to the White House.” Miller was the campaign’s senior communications advisor. Fabrizio, a pollster for the campaign and longtime Manafort associate, has met with Mueller’s team, CNN reported earlier this month. Stone and Manafort, then Trump’s campaign manager, had been business partners in the 1980s and 1990s. Manafort pled guilty to attempted witness tampering and obstruction of justice last September and agreed to cooperate with Mueller; that plea agreement is now in doubt, as prosecutors allege that Manafort lied to them during their investigation.