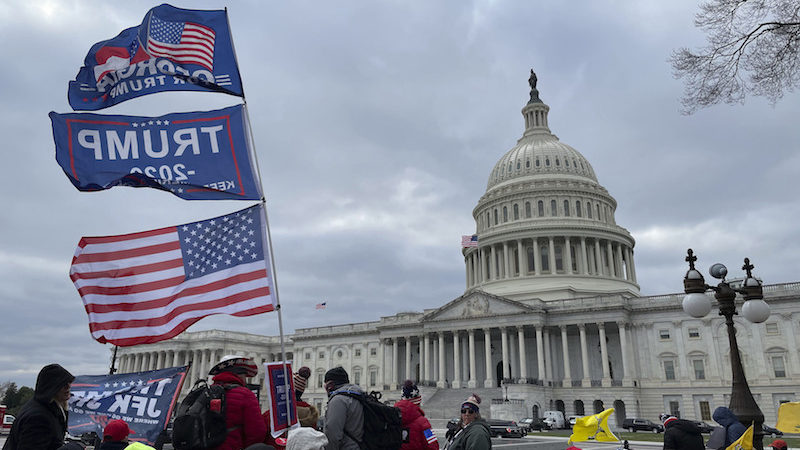 In the weeks since a mob of #MAGA supporters made their deadly January 6th attack on the U.S. Capitol, the crackdown on individuals and groups who planned and perpetrated the violence has accelerated. Twitter has permanently banned Trump and purged more than 70,000 accounts promoting QAnon conspiracy theories. Amazon Web Services stopped hosting Parler, the social media platform popular among Trump supporters, which boasts more than 12 million users. Reddit banned its entire r/DonaldTrump subreddit. Facebook and Instagram have been endeavoring to purge any content expressing support for the storming of the Capitol.

Meanwhile, federal authorities have been working to identify and bring charges against the rioters. More than 180 people have been arrested so far, and three members of the far-right group Oath Keepers are facing conspiracy charges.

Many Americans are understandably relieved that social-media companies have finally acted, and that the Justice Department is seeking to hold the rioters accountable. I am, too. But I am also afraid that, instead of curtailing right-wing nationalism and promoting civil discourse, these actions may simply drive extremist views underground and foster even more violence.

“We may confirm through our censoring their heretofore paranoid belief that they are being persecuted,” said Dr. Reid Meloy, a forensic psychologist and clinical professor of psychiatry at the University of California, San Diego, School of Medicine, who studies terrorist radicalization and consults for the FBI. “Ideology is hardened by censorship.”

There is precedent for this: The sweeping moves in response to the Capitol riot echo what happened after the 1993 shooting of Dr. David Gunn, the first murder of an abortion doctor in the United States. Until then, most individuals who blocked clinic entrances or menaced their staffs were charged with only minor offences under state and local laws, receiving small fines or a few days in jail at most. Just as some members of law enforcement and the military today have been discovered to share the core convictions of those who attacked the Capitol, many police officers and county prosecutors in the 1980s and 1990s shared anti-abortion activists’ beliefs about the procedure, and were reluctant to level harsh punishments against them.

“More often than not, they were sympathetic to anti-abortion extremists and did not treat their threats of violence and blockades of clinics seriously,” said Kathy Spillar, executive director of the Feminist Majority Foundation.

The year after Gunn’s murder, however, President Bill Clinton signed the Freedom of Access to Clinic Entrances (FACE) Act into law, which made harassment and violence against abortion providers a federal offense. The penalty for a first non-violent offense was up to a year in prison, a subsequent offense could lead to up to three years in prison, and criminal fines ran as high as $25,000. Violent offenses resulting in bodily harm were punished even more harshly, with as much as 10 years in prison. The law also gave victims the right to sue anti-abortion extremists in civil court.

The abortion-rights community—including my uncle Bart Slepian—was incredibly relieved by FACE Act’s provisions. Bart was an ob/gyn in Buffalo, New York who performed abortions. He had endured gauntlets of anti-abortion activists who spat on him as walked from his car to his office and whispered “murderer” in his ear at the supermarket. They followed his four young sons as they walked to school, asking in a toddler-ish sing-song, “Why does your daddy kill babies?”

The FACE Act succeeded in curtailing this harassment significantly. Within a year of the law’s enactment, clinic disruptions across the country decreased by about 40 percent and clinic blockades dropped by about 60 percent, according to data collected by the National Abortion Federation, the professional association of abortion providers.

Yet in the wake of the new law, violence against abortion doctors—which had already been ratcheting up as anti-abortion activists embraced increasingly aggressive tactics—surged dramatically. Between 1977, when the NAF began collecting data, and 1993, the year before the FACE Act was signed into law, there had been one abortion-related murder, three attempted murders, and 166 death or harm threats against abortion providers in the United States. But from 1994 through 2019, there were 10 murders, 23 attempted murders, and 590 death or harm threats.

My uncle was among those killed. In 1998, an anti-abortion extremist shot Bart in his own kitchen, in front of his wife and sons, then between 7 and 15 years old. My uncle died while my aunt performed CPR, one of my cousins called 911, and another tried to staunch his father’s wounds with paper towels.

I fear we may see a similar increase in violence now. Many extremists recently banned from social media platforms have not given up their cause—they’ve simply migrated to encrypted apps like Telegram, Signal, and MeWe, making them more difficult for law enforcement officials to track. After the violence at the Capitol and the wide-scale social media deplatforming that followed, Telegram channels run by the white-supremacist group the Proud Boys gained tens of thousands of new followers. Right-wing extremists have also begun communicating in code, which, like secret fraternity rituals, deepens the sense of comradeship.

Trump’s followers believe the election was stolen. The response of social media companies and federal authorities to the Capitol riot has only confirmed their feelings of paranoia and righteous indignation—feelings that are likely to intensify as President Joe Biden assumes office. It’s worth noting that every single murder of an abortion provider—and all but two attempted murders—has happened when a Democrat occupied the White House.

Already, there are indications that the violence at the Capitol was just the beginning. Ahead of Biden’s inauguration, the FBI warned that armed far-right extremists were planning actions not only in Washington, D.C., but at all 50 state capitals.

To be clear, I am in no way suggesting that federal authorities should not seek to hold violent extremists accountable for their crimes, or that online platforms should not do everything in their power to stop individuals and groups from using their sites and services to plan acts of domestic terrorism. But the legacy of the FACE Act and the struggle for abortion rights should serve as a reminder of what can happen when extremist views are met with a harsh response.

We are now entering another particularly fraught moment in American history. While the current efforts to crack down on extremism are understandable, political and business leaders will need to thread the needle of calming our very angry fellow citizens without validating their hateful beliefs and convictions based on lies. Striking that balance will not be easy. But the hard lesson of the FACE Act is that a response that seems right and feels right—that in so many ways is right—can nonetheless have horrific unintended consequences.