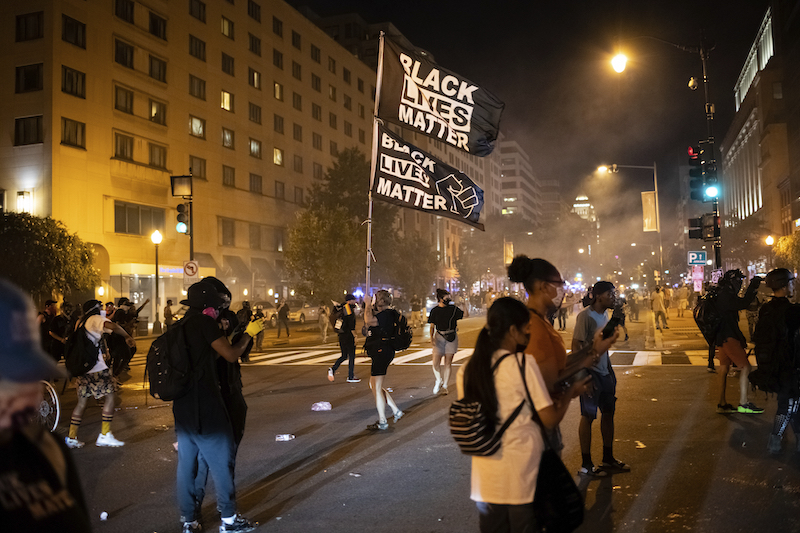 A protester waves flags after being pushed out of Black Lives Matter Plaza by police in full riot gear who used chemical dispersants and other munitions in Washington, D.C., on August 29, 2020 amid the Coronavirus pandemic. Image: Graeme Sloan/AP Images

The two defendants, Shamar Betts of Champaign, Illinois, and Tia Pugh of Mobile, Alabama, likely didn’t know each other, but they shared several things in common. Both are young Black people in their early 20s who previously had no criminal record. Both had little to no protest experience prior to May 2020. And both were charged with violating rarely invoked 1960s-era anti-riot and civil disorder laws directly inspired by segregationist legislators’ fears of Black activists.

Type Investigations and The Intercept covered these cases as they were pending, in an ongoing look at the federal crackdown against racial justice protesters. While the prosecutions were similar in some ways, the sentences diverged wildly: Betts got years in prison while Pugh was simply fined.

Prosecutors argued for the defendants’ pretrial detention, part of an unprecedented use of federal power to keep self-described protesters locked up until trial. A judge declined to detain Pugh, who was accused of breaking a police SUV window during a protest that had gone onto a highway on-ramp, but Betts, who was accused of inciting a riot via Facebook, has remained in jail since June 2020.

After conviction, both Betts and Pugh faced up to five years in prison and six-figure fines. In Betts’s case, prosecutors requested the maximum prison sentence and also that the judge compel him to pay $2 million in restitution for damages to businesses during the riot. For Pugh, prosecutors argued that she should serve 12 to 18 months in prison. The U.S. Sentencing Guidelines offered little direction in either case for how to sentence them, owing to the rare nature of the charges.

In Betts’s case, prosecutors largely succeeded in securing severe punishment. Judge Michael M. Mihm sentenced him to four years in prison, minus 12 months of time served. Additionally, Betts will be on the hook for at least $1.5 million in restitution to pay for damages to dozens of businesses, including branches of Burger King, JCPenney, and Walmart. Mihm reportedly remarked that unless Betts wins the lottery, he’ll likely never come close to paying it off. But until he does, he’ll have to forfeit half of his disposable income each month.

Betts’s lawyer, Elizabeth Pollock, told Type Investigations the restitution amount was set so high because Mihm agreed with prosecutors that the amount should be determined by the Mandatory Victim Restitution Act, which does not permit the court to consider a defendant’s ability to pay. Betts, a recent high school graduate, has only ever held part-time minimum wage jobs, including as a camp counselor. In January, he reported being $12,000 in debt for unpaid rent while he was in jail.

Pollock is planning to file an appeal on his behalf that will challenge the statute under which he was convicted, the restitution amount, and the sentence.

Meanwhile Betts, a diabetic who has reported trouble maintaining his health while in jail, waits to find out where he will be transported to serve his sentence.

“We’ve taken a kid with a bright future who makes one mistake, and we’re throwing him into an environment that could irrevocably alter his life, who knows what’ll happen to him in there,” said Pollock, who noted to Mihm in court that members of a white supremacist group convicted of conspiracy to riot in Charlottesville received less time.

Although Pugh was also convicted of a federal felony, her involvement with the federal justice system effectively ended at her sentencing. Prosecutors requested at least a year in prison, arguing that her offense was severe and she had shown insufficient remorse or respect for the law.

Judge Terry Moorer disagreed, according to Gordon Armstrong, Pugh’s lawyer. Moorer declined to sentence her to prison or probation—the “best possible outcome” for her, Armstrong said. Instead, Pugh is only mandated to repay $572.63, the cost of the broken window. She is considering an appeal of her conviction.

Armstrong said the prosecution process served as punishment enough for Pugh, who said less than two months before her sentencing that she believed the justice system was broken, and that she bore “the brunt of it,” according to a filing by prosecutors.

In a letter to the court before his sentence, Betts wrote of the fear and anger he felt while watching the video of Minneapolis Officer Derek Chauvin killing George Floyd, but said he regretted the way he responded, and hoped to continue working in education after he’s able to put the case behind him.

“I hope you can see me for the intelligent black man that I am, who made a mistake in a very emotional state,” he wrote.

Ashley Morris, Betts’s aunt who raised him during his teenage years in Jackson, Mississippi, said in a conversation last year that Betts was being used as a scapegoat for widespread civil unrest.

“He is just going to be another statistic,” she said, “another Black man who is a felon, and that’s a major boulder on his back.”