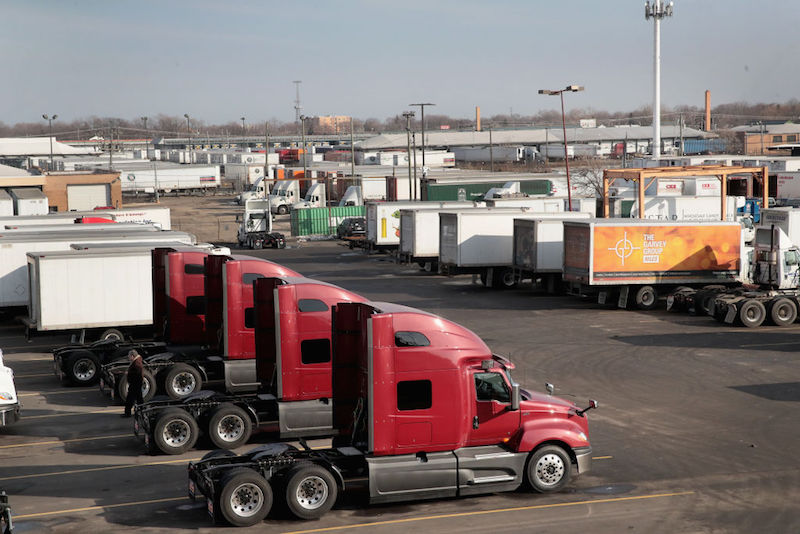 Trucks sit on the lot of a truck sales and service facility on January 25, 2018 in Chicago, Illinois. Image: Scott Olson/Getty Images

In a win for female truckers, an Iowa judge this week ruled that some documents tied to a high profile sexual harassment case concerning CRST, one of the largest carriers in the nation, will be made public.

It is the latest chapter of an ongoing battle between female truck drivers and Cedar Rapids-based CRST — one that long predates the #MeToo movement. In 2016, The Investigative Fund at The Nation Institute and Mary Review partnered on an investigation of sexual harassment in the trucking industry. Women in the story said that for years, they have endured everything from rape to catcalling while on the job and criticized the system by which their complaints were handled by CRST.

More than 100 women have joined a class action lawsuit against the company and were awarded class certification by a federal judge last year. The documents tied to the case may provide a previously unseen look at the inner workings of how CRST handled sexual harassment claims, in addition to depositions tied to the case.

In January, The Investigative Fund, in conjunction with the legal nonprofit organization Public Justice, filed a request in Iowa’s Northern District to have more documents related to the CRST case unsealed. Public Justice is also representing Real Women in Trucking, a nonprofit for female truck drivers, in the request.

“This is a great victory for transparency and for workers’ safety,” Jennifer Bennett, a staff attorney with Public Justice said. “As we’ve seen over and over again, secrecy helps enable sexual harassment. Nondisclosure agreements, secret arbitration proceedings, sealed court records—all these things help sweep harassment under the rug, so that it can continue, often for years, without anyone knowing about it. This decision is an important step toward ensuring that companies can’t enlist the courts in keeping allegations of sexual harassment secret.”