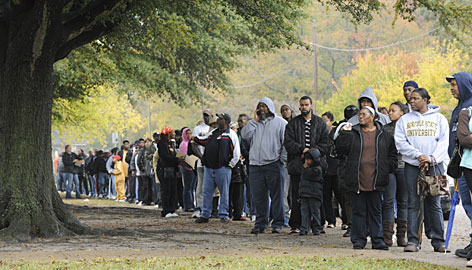 As the presidential campaign draws to a close, election reformers, best known for battling GOP-led vote suppression efforts, are tuning out any talk of a Sen. Barack Obama landslide. They are focusing instead on Democratic elected officials in Virginia who, they say, are ill-prepared for tomorrow’s vote.

“You have an unprecedented turnout in a historic election,” said Adisa Muse, director of the Virginia ACLU’s rights-restoration project, “and you just don’t have enough resources.”

On Friday, the Advancement Project, a national voter-protection organization, announced it was moving forward, in conjunction with the Virginia NAACP, in its lawsuit against Gov. Tim Kaine and top state election officials for allegedly failing to provide enough voting machines and poll workers to meet the expected turnout in minority precincts in Richmond, Norfolk and Virginia Beach.The lawsuit seeks remedies like extending voting hours to 9 p.m. on Election Day and offering the option of paper ballots if voters have been waiting longer than 45 minutes. A federal judge in Richmond will hear arguments today.

Nancy Rodrigues, Virginia’s secretary of the board of elections, told The Washington Independent that the lawsuit’s findings are out of date — and that state law doesn’t permit paper ballots or extended voting hours. That view is disputed in the lawsuit and by other election experts, citing the board’s authority to ensure that elections are properly administered.

The Kaine administration has found an unusual ally in defending against the lawsuit: the Republican Party. State GOP officials are seeking to intervene on the side of the governor, branding the request a “ploy” to get more Democrats to vote. “The other side is exploiting every single loophole that they have available to them,” Del. Jeffrey Frederick, the state GOP chairman, complained to The Washington Post.

Kaine has irked voting-reform advocates by saying that the state is “extremely well-prepared” to handle a big turnout and that long lines are not a major worry. “Look, we wait in line to buy coffee at Starbucks,” he said. “You wait in line to get on a roller coaster,”

“We shouldn’t treat the right to vote like a latte,” countered Judith Browne-Dias, co-director of the Advancement Project. She charges that there are racial disparities in the ratios of voters to machines that could lead to long lines and voters leaving before they cast ballots. In one largely black precinct in Richmond, Advancement Project researchers found a ratio of 452 registered voters per machine, “while across town [in a predominantly white neighborhood], it was 188 voters for each machine.”

Virginia law only requires that the decentralized election boards meet a minimum standard of 750 voters per machine.

With a half-million newly registered voters and an 85 percent turnout expected in some counties Tuesday, the Advancement Project estimated that such high turnouts would require some under-resourced precincts to take 20 hours to process all voters who show up.

There are other potential snares facing voters in Virginia. Peggy Sanner, Virginia coordinator for the non-partisan Election Protection coalition, worries that some voters will be “inappropriately challenged” over their eligibility, slowing down lines. Last week, for example, voting-rights groups protested that the registrar in Radford, Va., was illegally blocking eligible college studentsfrom voting because they listed their campus addresses as their home addresses.

In addition, many newly registered Virginia voters, including college students, don’t know that they’re required to bring some form of ID to the polls if they didn’t provide an ID when they registered. The result? They’ll be forced to use a provisional ballot, which are sometimes not included in final vote tallies. In Ohio in 2004, 22 percent of provisional ballots were not counted.

Even the long lines already evident during early voting haven’t fazed state officials. Asked about the possibility of delays on Election Day due to machine shortages, Rodrigues said, “All localities are following the law.”

Research assistance for this article was provided by the Nation Institute Investigative Fund, now known as Type Investigations.