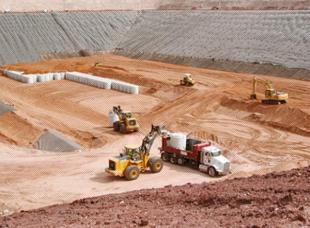 WCS has big plans for its radioactive waste dump in Andrews County, Texas

In our nation's quest to reshape its energy policy, nuclear power has re-emerged as an alternative to fossil fuels. In February, President Barack Obama announced $8.3 billion in loan guarantees to jumpstart construction of new nuclear reactors. But where do we put the newly generated nuclear waste? Serious questions remain about the safe disposal of refuse from present and past nuclear operations.

And no place more so than in a remote area of West Texas, where a politically connected company, Waste Control Specialists (WCS), operates a 1,338-acre radioactive waste dump on top of one of the largest aquifers in North America, the Ogallala Aquifer. Also known as the High Plains Aquifer, this 174,000 square-mile water table — approximately the size of California — underlies parts of eight states (Texas, Colorado, Kansas, Nebraska, New Mexico, Oklahoma, South Dakota and Wyoming). The aquifer supplies drinking water to 1.9 million people who live within its boundary and provides 30 percent of the country's groundwater used for irrigation.

For a cautionary example of what could go wrong when energy policy is viewed with an eye toward profit and regulation becomes politicized, one need look no further than West Texas — and the Gulf Coast.

In 2008 and 2009, the Texas Commission on Environmental Quality (TCEQ) granted WCS licenses to dispose of radioactive waste at its dump in Andrews County, Texas.

Founded in 1994, the politically connected WCS' parent company, the multinational conglomerate Valhi, Inc., is chaired by billionaire Harold Simmons, who is famous for giving $3 million to the Swift Vets and POWs for Truth and $2.9 million to the American Issues Project (AIP). During the 2008 election, AIP sponsored ads linking Obama to Chicago educator Bill Ayers (a former leader of the Weather Underground and a current member of the In These Times Board of Editors). Simmons also contributed $620,000 to Rick Perry, the Texas governor responsible for appointing the three TCEQ commissioners who approved WCS' radioactive waste disposal licenses.

WCS' most recent license allows the company to dispose of Class A, B and C low-level radioactive waste, which includes fission products from nuclear reactors and weapons production and waste from research, industrial and medical facilities. On its website, WCS boasts, “Our site's unique geology, arid and isolated location, and strong support of the Permian Basin community, make our Andrews County facility one of a kind.” Indeed it is.

Older maps place the WCS site on top of the Ogallala Aquifer. Newer maps, however, depict the boundary of the aquifer further north and off-site. Because WCS now controls the hydrogeological monitoring of the area, it is impossible for scientists to reach consensus on the boundaries of the Ogallala Aquifer and other water tables close to the site, and the possible hydraulic continuity from one water table to another.

In order to prevent radioactive material from contaminating the water supply, the Nuclear Regulatory Commission (NRC) forbids any nuclear waste disposal facility to overlie an area where groundwater could penetrate the waste material. NRC guidelines put it this way: “The disposal site must provide sufficient depth to the water table that ground water intrusion, perennial or otherwise, into the waste will not occur.”

The precise distance between the disposal site and the aquifer has been the subject of intense debate. Prior to the licensing, a volley of data, tests and revisions ricocheted between WCS, the press and environmental groups, each claiming various water table boundaries and degrees of consequent risk to the public.

But Glenn Lewis, a former technical writer for TCEQ, has no doubts. During the four years Lewis worked on WCS' application to establish a radioactive waste dump, he and the seven other members of his team became concerned about the site's proximity to the Ogallala Aquifer and other water tables, and characterized the location as a “wet” site.

“The only safe site for radioactive waste is a dry one,” Lewis says. “It was the unanimous decision of the team that the WCS site is irredeemably unsuitable for the disposal of radioactive waste, and we said this much.” TCEQ commissioners ignored this information, and Lewis and two other review team members, an engineer and a geologist, resigned from TCEQ. All three cite upper management's indifference to their professional recommendations as the reason for their departure.

At least one previous pre-licensing evaluation at the same location echoed the conclusions of Lewis' team. In 1992 and 1993, independent oil and gas consulting firm Terra Dynamics recorded samples from 58 boreholes at the site; 46 samples were described as “moist,” five as “wet,” and one as “making water.”

In a June 2009 story in the Texas Observer, Forrest Wilder described “nine areas inside and near” the disposal site where groundwater was present. When questioned about this, company spokesman Chuck McDonald (tacitly acknowledging a connection between the groundwater and the company's radioactive waste dump) explained that WCS had developed a solution to the problem: “It is a moisture disposal system that pumps moisture out.”

When laws and land shift

In 1999, the Texas legislature abolished the state authority on radioactive waste disposal, transferring jurisdiction to a new commission, currently known as the TCEQ. In 2003, the legislature amended the state's Health and Safety Code, authorizing the TCEQ to issue a single license for compact waste, and allowing the designated license holder to also dispose of federal waste. And in 2007, the legislature amended the Health and Safety Code, transferring the licensing and regulation of radioactive material from the Department of State Health Services to the TCEQ.

The combination of these three legislative acts ensured that radioactive waste disposal would be the purview of the TCEQ. The TCEQ is structured so that three commissioners, appointed by the governor, make final determinations on contested permitting. In 2008, the commissioners approved WCS' by-product materials disposal license and, in 2009, a low-level radioactive waste disposal license. Thus, WCS became licensed by the state of Texas to dispose of almost the full gamut of radioactive waste (barring the hottest, such as spent reactor fuel) from both state and federal sources.

According to WCS, the 2009 license was a landmark event: “WCS is now the only facility in the United States licensed in the last 30 years to dispose of Class A, B and C low-level radioactive waste.” There are two other facilities that are licensed to handle the same three classes, US Ecology in Washington and EnergySolutions in South Carolina. But unlike WCS, they are not licensed for uranium by-product materials.

In addition, the dumps in Washington and South Carolina only accept in-compact waste. Texas is currently on a precipice concerning compact waste. Decisions made in June by eight commissioners of the Texas Low-Level Radioactive Waste Disposal Compact Commission (six of whom are Gov. Perry appointees) may allow for the disposal of radioactive waste from 36 states at the WCS site. “This could open [Texas] up to not only become the nation's but potentially the world's dump site,” says Cyrus Reed, the conservation director of Sierra Club's Lone Star Chapter.

WCS' success can be traced to the flexibility of the TCEQ. As the lead environmental agency for the state, it is not only responsible for granting licenses for nuclear waste disposal, but it is also charged with monitoring the state's water quality. Yet in the case of WCS, TCEQ spokesperson Terry Clawson says it is the licensee's responsibility to implement ongoing water monitoring. In other words, the TCEQ gave WCS, the operator of the nuclear waste site, the responsibility to monitor itself. In other words, safety of the water in the Ogallala Aquifer — the same aquifer that 1.9 million people get their drinking water from — is in the hands of a company that operates a radioactive waste site.

Groundwater at the WCS site is only one concern. Earthquakes are another. The WCS dump is located in the Central Basin Platform, a geologic region prone to earthquakes. And according to the NRC, “Areas must be avoided where tectonic processes such as faulting, folding, seismic activity, or vulcanism may occur with such frequency and extent to significantly affect the ability of the disposal site to meet the performance objectives.”

In the past century, West Texas has had two near-magnitude 6 earthquakes, increasing the likelihood that a magnitude 7 will occur in the next few hundred years. The epicenter of a magnitude 4.6 earthquake that occurred on Jan. 2, 1994, was four miles southeast of the WCS site.

“Predicting earthquakes is not physics. The best evidence we have is based on history,” says Cliff Frohlich, a seismologist and co-author of Texas Earthquakes. “And based on history, it would be remarkable if West Texas doesn't have an earthquake in the next 200 years.”

Texas authorities do not appear to take either the enormity or the probability of potential disasters at WCS seriously. The federal government, in turn, appears to trust Texas' judgment.

With nuclear energy emerging on the national agenda as a means to combat climate change and meet rising demand, Americans need greater reassurance that environmental protection will remain a top priority. Currently, WCS is operating on one-tenth of their total acreage. If the TCEQ were to increase current disposal capacity, the WCS facility could potentially encompass more than 20 square miles.

As with the ongoing oil spill in the Gulf of Mexico, when the drive for corporate and industrial growth outpaces controls for safeguarding human health and natural resources, oversight and responsibility become too important a domain for any one entity to regulate. In the case of WCS and the Ogallala Aquifer, the public health of residents across eight states is being put at risk by decisions made by a few for the profit of one politically connected waste disposal company.

Research support for this story was provided by The Investigative Fund at The Nation Institute, now known as Type Investigations.

Laray Polk is a writer and multimedia artist.