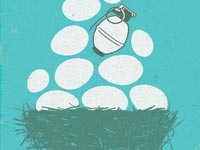 Charles Replogle wanted a safe investment for his 86-year-old mother and his mentally disabled brother. So when a broker — a friend he'd known since he was 9 — suggested a low-risk, high-yield investment called a principal-protected note, the 55-year-old Vero Beach, Florida, restaurant owner handed over $130,000 — about a third of his savings. It sounded like a no-brainer.

Huge mistake. The investment Replogle bought from UBS Financial Services, a division of the Swiss bank UBS AG, was much riskier than he knew. Although described as safe, it was in fact a complex, iffy offering known as a structured product — an investment whose yield depends on the performance of underlying financial instruments such as stocks, stock indexes, and unsecured bonds.

Within a year Replogle had lost every penny he'd invested. There was no government-backed guarantee of his principal, and the underlying investment turned out to be unsecured bonds issued by Lehman Brothers, which collapsed in September of 2008. (In a prepared statement, a UBS spokesperson said the brokerage followed “all regulatory requirements, well-established sales practices and client disclosure guidelines” in selling Lehman structured products to its clients.) Structured products — now being sold to small investors in record numbers — are so complicated that the brokers who sell them don't always know how they work. But unlike investors' returns, the brokers' commissions are guaranteed.

Replogle understandably felt blindsided. “We weren't looking for home runs,” he says. “We were looking for something we'd be able to count on. We were told that there was no risk. We thought we were fairly safe.”

So here's the $130,000 question: If these investments are so risky — many financial experts say they're rarely suitable for any individual investor, let alone a risk-averse person seeking an alternative to CDs — why are they so loosely regulated? Structured products must be registered with the Securities and Exchange Commission, but that's about it. No regulator reviews them before they're sold. When Congress enacted the 2010 Dodd-Frank financial-reform law, these complex products were ignored. The law created a new Consumer Financial Protection Bureau, which will investigate deceptive marketing practices (among other duties), but the new agency won't oversee the securities industry.

Meanwhile, sales of structured products keep rising. In 2010, Wall Street firms and major banks sold a record-breaking $51.86 billon of the investments to U.S. consumers. Their pitch: low risk to principal, and high yield. Their favorite customers: older Americans who are scared of outliving their money if it remains parked in low-yielding CDs and bonds — and are often desperate to find a safe, better-paying alternative.

“Clearly, Wall Street is targeting fixed-income investors, most of whom are retirees seeking a steady source of income while guarding against any material loss of principal,” says Chris Vernon, a Naples, Florida-based attorney who has represented hundreds of older investors who have been burned, including Replogle. And they're being targeted, says Vernon, for the same reason Willie Sutton robbed banks: “ 'Cause that's where the money is.' ”

Structured products are extremely profitable for sellers. For buyers, not so much. At best, you pay high fees for an illiquid investment with limited potential gain. At worst, you can lose everything. To date, investors have lost an estimated $164 billion in structured products and similarly risky investments. And regulators expect the losses to grow dramatically — along with investor complaints. Americans who have bought these investments since 2008 are increasingly filing claims as the size of their losses becomes apparent. “The big wave is yet to come — most people don't know what they have yet,” said Joseph P. Borg, director of the Alabama Securities Commission, who is investigating a number of claims.

Many investors have stories similar to Replogle's. Rob Brunhild, 49, of West Bloomfield, Michigan, for example, invested in Lehman notes through UBS for his family trusts and his 80-year-old mother. He expected “a good solid return with minimal risk. The broker implied that the notes were like U.S. Treasuries.”

Tricia Flanagan, 58, invested $200,000 in principal-protected notes for her retirement in 2008. A real-estate agent in Kiawah Island, South Carolina, Flanagan had second thoughts when Lehman's financial woes made headlines, but her broker convinced her not to sell. She lost her entire savings. “I was vulnerable,” she says. “I felt I was targeted. There were people who knew we were sitting ducks.”

Louis Straney, a securities arbitration consultant in Santa Fe, New Mexico, believes that structured products are Wall Street at its irresponsible worst. “In my three decades of Wall Street experience, I have not seen any other product as absurdly destructive,” says Straney, whose firsthand knowledge of Wall Street finance goes back to the 1980s junk bond days.

What's being sold to consumers today, he says, is a repackaged version of the complex, high-risk products that Wall Street sold to institutional investors in the 2000s — products that played a major role in causing the 2008 financial implosion. What's more, brokers are highly motivated to sell them. The sales commissions on structured products range from 3 to 10 percent. By contrast, the commission for selling a plain-vanilla bond can be less than 1 percent. And from a seller's standpoint, bank lobbies are an ideal place for brokers to pitch these products. “Elderly people are often more comfortable with brokers who work in their banks,” says Geoff Evers, a Sacramento, California-based lawyer who has represented investors stung by losses from structured products. To be sure, the products' complexities are detailed in the prospectus (a lengthy, mind-numbingly dense document few people read and even fewer understand) — but the broker's verbal sales pitch typically is very simple: high yield, minimal risk. That's an alluring come-on when traditional, safe products like CDs pay so little.

It's also misleading. “The financial industry is effectively using structured products to borrow billions of dollars from Main Street investors with no collateral,” says Vernon. And for buyers who have second thoughts, these investments aren't easy to unload. Most aren't traded or listed on exchanges. If you want out of your investment, your only option may be to sell it back to your broker at a loss.

Federal and state securities regulators know about and are investigating these problems. They've even set up special task forces to study structured products. But so far regulators haven't stopped any banks from issuing them.

How Brokers Sucker You

A sales pitch for a structured product often starts like this: A bank customer complains to the teller about the awful yields on CDs and savings accounts. The sympathetic teller refers the customer to a securities broker right there in the bank, who enthusiastically describes a product he or she claims is a secure alternative. It's rarely called a structured product; most of these investments have jargony names like “reverse convertible” or “return optimization” securities. Each bank and brokerage has its own version.

Ignore the salesperson's hype. Instead, watch for these common red flags.

A too-high yield: One of the hottest structured products sold today touts yields as high as 30 percent a year — six times what you'd earn on an investment-grade corporate bond. The higher the rate you're offered, the riskier the product.

Promised protection: The catchphrases are “ downside protection” or “ market risk protection.” If the underlying instrument is stocks, for example, you're told your losses will be limited when stocks fall; in exchange, your potential gain is capped when the market rises. In plain English, “downside protection” means that a risky derivative is involved and you're less protected than you think.

Overpromoting the bank: The broker may emphasize the financial strength of the bank that issued the product. But you're in no position to assess a bank's balance sheet — that's challenging even for the experts. And as we all saw in 2008, big financial institutions can go broke.

How to Fight Back

If you've been burned by one of these investments, you likely can't sue the issuer or the broker who sold it. Under most brokerage contracts, an investor waives the right to sue and accepts binding arbitration. To get your money back, you usually must prove that the product was “unsuitable” for you. Under current law, brokers aren't required to put your interests ahead of their own unless they're also registered investment advisers, but they are required to sell products that are suitable for your investment objectives and financial situation. First, talk to your broker's manager.

If you think you've bought an unsuitable product or your broker ignored your investment guidelines, the brokerage management needs to know. You may get your money back through a direct settlement with the brokerage. Even if you don't, inform the firm's supervisors as soon as you see a problem.

File an arbitration claim: Most attorneys who specialize in this field prefer clients with claims exceeding $50,000. You can locate a lawyer through the Public Investors Arbitration Bar Association ( 888-621-7484). An attorney who takes your case usually takes one-third of your award. Have a smaller claim? The Securities and Exchange Commission (SEC) offers Arbitration/Mediation Clinics, which work out of law schools (mostly in the Northeast) and are generally free for investors with limited income. You don't need to live near a clinic to request assistance. For a list of clinics visit sec.gov/answers/arbclin.htm.

Request an investigation: Contact your state securities administrator: These frontline regulators can investigate your complaint. If there's a significant problem — or if you think you're the victim of a financial crime — they can file suit and gain compensation for fleeced investors. Find your state regulator via the North American Securities Administrators Association (202-737-0900). Another good option: Contact your state attorney general's office. During the dot-com-bubble years, many attorneys general (such as New York's Eliot Spitzer) performed tough investigations and won investor repayment suits that the SEC and FINRA largely avoided. All have attorneys who monitor and prosecute consumer and investor fraud. Locate the attorney general's office in your state through the National Association of Attorneys General.