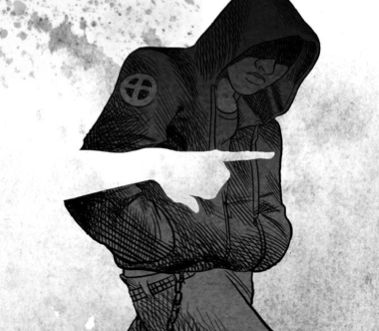 It was chilly in Brooklyn on November 4, with rain on the way, so Stephen Trenchfield’s mom insisted he wear his heavy jacket to school. Although he says he couldn’t feel it under his coat, a small pocket knife that he used for fishing accompanied him to school that day, setting off the metal detector at the entrance of the High School for Public Service. The school suspended him for sixty days.

When we met in early December, Trenchfield, a senior, was midway through his twelve-week suspension at the Brooklyn West Alternate Learning Center — a four-room “school for degenerates,” as he calls it. It was his second time at Brooklyn West; a year earlier, he was sent there thirty days for fighting. Tall, clever, and deeply sardonic, Trenchfield plans to be a college history professor, plans that his months at Brooklyn West nearly derailed.

During his first stint there, Trenchfield fell so far behind in math that he almost failed upon his return. At his regular school, where he was getting 80s and 90s on his Trigonometry 1 exams, the class was studying distributions before he left. When he came back from Brooklyn West, he felt like Rip Van Winkle.

“I had no idea what we were doing in that class,” Trenchfield says. “I was just sitting in the back of the class, copying down notes every day.” He barely passed math that year, with a final grade of 65.

He started off this school year in his regular school with a great math teacher. He caught up so quickly that after a month he was bumped up into a more advanced class. In November, the class was factoring polynomials. Two months into his time at Brook- lyn West, he was still factoring polynomials. When he asked his home school’s administration why they wouldn’t send over work to the alternate learning center, he was told that he would get work there.

Despite passing all of his classes at the alternative learning center last year, Trenchfield had difficulty getting credit for his work when he returned to his regular school. Although the curriculum is theoretically equivalent, the home school has final say over whether or not to grant credit. In Trenchfield’s case, his eleventh grade guidance counselor, with whom he had a testy relationship, refused to sign off on them, and it wasn’t until this year that a new guidance counselor put those credits on his transcript.

Suspension rates in New York City and other large American cities have risen over the past decade, a reflection of a zero-tolerance approach to discipline. In 2008-2009, one in fourteen New York City schoolchildren was suspended, up from one in twenty-five in 1999-2000, according to data obtained by the New York Civil Liberties Union through Freedom of Information Act requests. The average suspension in New York lasts twenty-five school days. Since the city’s regulations require that students receive alternative instruction for the duration of their suspensions, during the 2009-2010 school year, New York sent approximately 11,000 middle and high school students to “alternate learning centers”: twenty-nine school-like facilities that students attend during suspensions.

Students who get suspended are likely to be at risk to begin with. In New York City, students with disabilities are four times more likely to be suspended than students without disabilities. Black students, who comprise 33 percent of the student body, accounted for 53 percent of suspensions over the past ten years. Researchers have found evidence of disproportionate use of suspension all over the country, from Texas to Indiana. Child advocates are concerned that the disproportionate suspension of black and disabled students creates a “school-to-prison pipeline.”

To some, disciplinary alternative schools like New York’s are another piece of that school-to-prison pipeline. A chaotic atmosphere, low academic expectations, and no educational accountability leave students even worse off than before. Studies indicate that suspended students are more likely to fall behind academically, be held back, drop out, and commit a crime, ultimately winding up incarcerated.

New York City’s Department of Education refused repeated requests to visit an alternate learning center, and many subsequent requests to interview teachers or principals, without explanation. Education Department spokesperson Marge Feinberg said that not a single employee of any of the twenty-nine sites was available for an interview, and that visiting a site would require signed permission from the parents of every student, a policy that several veteran New York City education reporters had never heard of.

Tara Foster has represented more than 100 students in her sixteen years as an attorney at Queens Legal Services. She is skeptical of New York City’s Department of Education claims that it wants to reduce suspensions.

“It’s just not happening,” she says.

Schools, she says, still like to throw the book at kids.

“There was a time when we’d sit kids down and have them talk to each other when they got into a fight,” Foster says. “Not anymore.”

Before they were alternate learning centers, they were known as “suspension sites.” In 2007, former New York schools chancellor Joel Klein rechristened them, developed a standard curriculum in four core subject areas (math, English, social studies, and science), and brought additional social workers from the nonprofit group Partnership with Children into some of the schools. Michael Khairy, an English teacher at Brooklyn West and a second-year teaching fellow, worked on developing the English curriculum, which he says teaches all the required skills for each grade level, but is “flexible enough for students coming in and coming out” of the centers at different points throughout the school year.

Where Khairy sees flexibility, Avni Bhatia sees impossibility. She represents special education students facing suspensions, and before law school, she taught third grade at the private Town School on the Upper East Side. “It is hard to really develop individual programs for every stu- dent, especially when it’s not the student’s permanent school,” she says.

Other districts across the country are experimenting with different ways to educate their suspended students. At Success Academy, a suspension school that opened in 2008 on the ground floor of the Baltimore City Public Schools headquarters, two teachers teach math and English. Every other course — from history to French to biology — is taken online, with a curriculum developed by Apex Learning. Students spend half the school day at a nearby YMCA, where they receive counseling, play sports, and attend classes on health education and career preparation.

When I visited in November, Dayton Woodson, 15, had been at Success Academy since the beginning of the school year after being suspended for forty-five days for fighting. Skinny and shy, he was passing all of his classes, except for French. “I don’t really understand it,” he said, eyes downcast. “It’s on the computer.”

His classmate Jesse Atkins, 18, also struggled with this DIY approach to learning. “Being behind on the computer makes it harder. You’ve got to understand everything from the screen,” he said. “There’s nobody to break it down for you.”

I brought this up with Jonathan Brice, executive director of Student Support and Safety for Baltimore public schools: Isn’t it possible that students who return to school behind in their classes might be more likely to act out, or get discouraged and drop out?

“The reality is that many of these kids are already behind when they committed the offense,” he says. “Our focus is on improving their behavior, life skills, helping them make better decisions, so they can go to school and not get in trouble.” As far as academics go, he says, “They’re just going to have a lot of work to catch up on.”

That strikes Russell Skiba, a professor at Indiana University and a leading researcher on racial and other disparities in suspension, as a “risky stance.”

“Kids who are falling behind academically are at much greater risk for misbehaving. They may work harder, or they may give up,” says Skiba, who advocates against the use of out-of-school suspension. “What is the transition plan? If a kid’s been out of his home school for two months, do you just drop him back in class and expect him to function better than two months ago? That seems unrealistic to me.”

Desmond Reyes, 17, is Puerto Rican, and was diagnosed last year with attention deficit hyperactivity disorder, although his mother had been pushing for a diagnosis since middle school. He wears his ADHD on his sleeve, as he frequently plays with his cellphone while he tells me how he wound up at Excel, an alternative school for students transitioning out of the criminal justice system.

A self-described “hyper little Energizer bunny,” Reyes presented a problem for his overburdened, underresourced schools in the city of Waterbury, Connecticut. They coped by “just suspending me,” he says. “Suspension, suspension, suspension. I’d rather they kept me in school, but they just wanted to get rid of the problem.”

His last suspension, in November 2009 for possession of marijuana in school, landed him in juvenile detention. After spending several months in a residential rehabilitation program, he was assigned forty-five days either at Excel or at adult education, before he would be allowed back into regular school.

His attorney, Michelle Fica, fought hard to get his special education classification, and to keep him out of adult education, because credits from there are not transferable to a regular high school. “Schools will try to send all expelled students over the age of sixteen to adult education, and then tell them not to bother coming back, because they’ll never be able to make up the credits in time to graduate at eighteen,” at which point they lose their right to a public education, says Fica. With his special education diagnosis, Desmond can pursue his public education until age 21.

At Excel, he says, “We stay in the same classroom all day. There is no homework at all. The work is at a toddler level. I literally gave an English worksheet to my little sister, she’s 11, and in seventh grade. She looked at it and said, and I quote, ‘This is easy.’ ”

Reyes, who cleans offices and works at a gym when he’s not writing music or poetry, wants to be a psychologist. He’s itching to be out of Waterbury, enrolled in college, and living in a dorm. But that dream will have to wait another year, because his repeated suspensions and year-long expulsion left him drastically behind.

“I’m doing my senior year again,” he says. “I want to go to college, and if I go to college without having done the work, I’m not going to know anything. I’m going to be lost and want to drop out.”

Still, he counts himself lucky to be back in his district school. “Without Michelle,” he says, “I would probably still be in adult ed.”