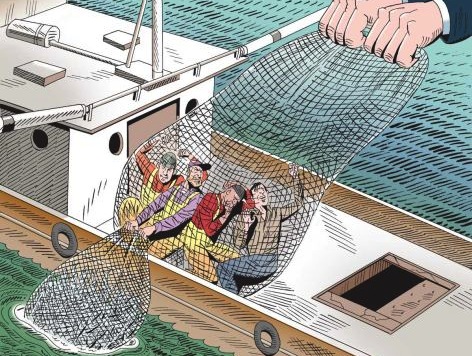 Is the government killing our fisheries? | Credit: COURTESY NEWSDAY/MARTIN KOZLOWSKI

Is the government destroying fisheries in order to save them?

It's a question I started asking several years ago after spending time on a commercial dragger in Montauk, watching thousands upon thousands of pounds of dead fish getting thrown back into the ocean after they'd landed on the deck.

The reason? Many of those fish were valuable but out of season and could not be landed without risk of major fines. Some of the fish — whiting, in this case — were of legal size and in season, but too small for the processor and were thrown back. Others fell into the category of “trash” fish with little commercial value.

A 2005 UN report found that 7.3 million tons of total “bycatch” is wasted annually. In an ocean of dwindling resources, wasting any fish (whether it's edible or useful for other commercial purposes) ought to be avoided, and government regulators charged with protecting our shared natural resource must step up with pragmatic and effective new regulations.

It's not only the fish that are endangered. Livelihoods are on the line, in Montauk and elsewhere, and small-time operators pursuing this tough, honorable and ancient trade are struggling to keep up with the bills amid ever-changing regulations — even as Americans continue to demand more and more of their product. Better regulations need to be matched by policies that promote economic opportunities for fishermen.

There's a case to be made for a total reset of the fisheries management scheme. How about an intensely localized fisheries program modeled after sustainability efforts that now support locally grown produce? There is a feel-good aspect to ordering “line-caught” fish on your local menu — but that's a boutique and pricey gesture that mainly appeases liberal sensibilities, while putting unfair stigmas on fishermen who run draggers and other commercial boats. When done responsibly and within a regulatory framework that's fair and sensible, those methods can and should continue to be utilized.

The bottom line is that it will take fishermen working hand-in-hand with regulators to ensure that there will be fish available for future generations of consumers and fishermen alike.

It's easy, as any fisherman will tell you, for self-satisfied environmentalists to declare that overfishing is the main culprit in an imminent “aquapolypse” — despite the toxic effects of relentless coastal development and offshore drilling, which have helped to produce dead zones where nothing can live, let alone be harvested. Still, new fishing regulations could make a real difference.

The European Commission, which recommends legislation and other policy initiatives under the aegis of the European Union, has just proposed a new land-everything quota system that promises to eliminate bycatch — and potentially save livelihoods — by mandating that no fish is thrown back. It's worth looking at whether such an approach stateside would help maintain the mom-and-pop American commercial fleet.

Any new regulatory scheme must be designed to protect small-time draggers; owing to the scale of their operations, they are in the best possible position to mitigate against bycatch of all sorts. Generally speaking, the less time a fish spends on the deck of the boat, the greater its chances of survival. The longer it takes to sort through the catch, the greater the mortality rate. Additionally, many of the smaller operators have long-standing, multigenerational expertise in their local waters and are well-equipped to avoid excessive waste.

Instead of policies that prune the fleet by keeping big operators in business at the expense of smaller boats (in the interest of more efficient management), government ought instead to focus on phasing out the “super-trawlers” that catch, for example, the pollock that goes into McDonald's fish sandwiches. The bigger the boat, the bigger the pile of wasted fish, crushed under the weight of a huge net teeming with all sorts of fish.

Today, the American National Marine Fisheries Service is promoting bycatch-reduction devices, quota systems and all sorts of intense micromanagement, not to mention a program for monitoring fishermen that is the seaborne equivalent of a felon's ankle bracelet. The latest innovation is the “catch shares” model, being implemented in the Mid-Atlantic and elsewhere, where fishermen are given a piece of the total quota and aren't hamstrung by constricting protocols such as “days at sea” regulations — a rigid model that dictated which days fishermen could fish for a particular species and, among other ensuing problems, often forced them to fish in bad weather or lose their chance at making a buck.

The catch-shares model lets you trade your individual quota to another (usually bigger) boat, and as such, has a mixed reputation. It's been found to dramatically reduce bycatch in the Gulf of Mexico red snapper fishery. But for some fishermen, it's yet another whack-a-mole regulatory snafu-in-waiting; in Europe it drove many small operators out of business.

It should come as no surprise that a recent Commerce Department report found that mistrust and hostility toward fisheries regulators has reached an apex in this country. It's especially the case in the Mid-Atlantic, which has seen a number of protocols come and go in recent decades, each more maddening than the last.

Fishermen have seen healthy fisheries nearly shut down because of inaccurate science; they've tossed back thousands of dead bluefin tuna because the bluefins wound up on the National Oceanic and Atmospheric Administration's endangered species list. “Common sense, it isn't so common out here,” says one Montauk fisherman.

In fairness, the National Marine Fisheries Service is working hard on sustainability in the face of intense industrial pressures on the high seas. In trying to address those competing interests, the Obama administration has offered up a comprehensive oceans policy blueprint that begins with the premise of ecosystem-based management and marine spatial planning, which divides the waters into sectors: The oil rigs will go here, the wind farms there, the natural gas pipelines here — even Republican Mississippi Gov. Haley Barbour thought it was a good idea. But last year's BP disaster in the Gulf of Mexico eclipsed that conversation.

But where will the fishermen go? Where does this leave local fishermen already faced with a zeroing-out of new commercial fishing licenses? This codification of the sea into industrial sectors may yet be another sign that the fix is in for them, that an ever-shrinking fleet will be forced to negotiate a wind-befarmed future horizon while, back on land, hysterical environmentalists perched on oceanfront estates shovel fried squid down their gullets.

It's time to put the small fishermen first, and stop treating them like the pariahs of the high seas. Acknowledge that overfishing is part of the problem, but recognize that the fishermen are the ones with the highest personal stake in the future health of our fisheries. If fishermen can begin working with regulators in the spirit of mutual sustainability, and abandon the battle of wills with regulators, American fisheries can survive — and might even begin to thrive again.

Tom Gogola is news editor of the North Bay Bohemian, a weekly paper in Northern California.