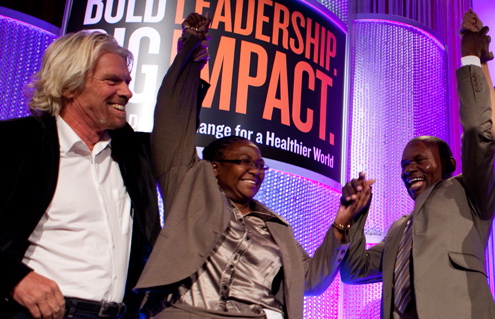 During the 1970s and 1980s, the World Health Organization and other global health leaders often strove to improve the health of the world's poor by targeting private sector excesses. They imposed restrictions, codes, and “ethical criteria” on the marketing of infant formula, pesticides, and tobacco, unnerving executives and stifling business plans. Success hinged on the cooperation of local governments, but where policymakers implemented recommendations they achieved real results. Breastfeeding rates rose, pesticide poisonings fell, and tobacco consumption declined.

Since then, the global health establishment has been turned on its head. Over the last two decades, the private sector has emerged as the world's top source of financing and leadership in the fight against deadly disease. The resources of some of the private industry players involved in global health today dwarf those of the WHO. Groups such as the Global Business Coalition aim to turn “business assets into disease-fighting assets”; the GBC boasts a membership of nearly 200 companies, including multinationals such as Coca-Cola, Exxon Mobil, and Pfizer. Why the interest? Firms are responding to local demands for corporate social responsibility, but they also have come to realize, as they look to emerging markets for future growth, that underwriting public health is a long-term investment. As development economist Daniel Altman recently explained, in a global economy, “these people are your consumers, your workers, your investors.” Several former WHO officials now work on public health issues for private industry. Most telling is the fact that private interests now bankroll four out of every five dollars of the WHO's budget.

The problem is that the companies most active in global health projects today hail from a narrow range of industries, many of which are under fire for their negative impact on public health. These private firms are playing a double game: disrupting local communities with one hand and writing big checks to ostensibly help them with the other. Often, their core financial interests are directly at odds with the business of improving the health of the poor, in ways that are distorting the global health agenda.

The extractive industry is a prime example. The mining industry, which includes oil and gas firms, has been at the forefront of many prominent global health projects. This year, the GBC handed out awards to six companies for their achievements. Mining multinational Rio Tinto was lauded for its anti-malaria work in Equatorial Guinea. The mining giant Gold Fields Limited was praised for HIV prevention efforts in Ghana. Anglo American has been widely praised in global health circles for providing free antiretroviral therapy to its HIV positive workers in Africa; its former chairman co-chairs the GBC. And ExxonMobil now contributes more money to fight malaria than any company outside the pharmaceutical industry.

But by its nature the mining industry's core business of extracting natural resources is a disruptive process. Accordingly, these firms come to work on public health with blemishes on their reputations. Rio Tinto boasts successes against malaria in Equatorial Guinea, but in Papua New Guinea, the company dumped billions of tons of toxic wastes and was complicit in repressive violence that led to over 10,000 deaths, according to a class-action suit filed in 2000. Gold Fields has reduced sexually transmitted infections by its mineworkers in Ghana by 90 percent since 2004, but local NGOs and independent experts report that its operations there have contaminated waterways with dangerously high concentrations of heavy metals, depriving local villages of drinking and irrigation water. Anglo American plays a leadership role in global health circles, but a former UN High Commissioner for Human Rights has called the company's exploitation of land and water around mines in Ghana a “violation of communities' right to maintain a sustainable livelihood.”

These examples speak to more widespread environmental disruptions committed across the mining industry: in Nigeria's oil-rich Niger delta, for instance, oil companies — including ExxonMobil — contaminated local waterways and fishing grounds with more than 2.4 million barrels of spilled oil between 1976 and 1996, according to Nigerian government analyses. After the oil companies launched community development programs to stanch criticism, the anti-poverty charity Christian Aid called the Niger delta a “veritable graveyard of [such] projects, including water systems that do not work, health centers that have never opened and schools where no lesson has ever been taught.”

Soft-drink and snack companies have also moved to the forefront of key global health initiatives, in particular the fight against non-communicable diseases. NCDs, which include afflictions such as cardiovascular disease and diabetes, now cause more than half of all deaths in poor and middle-income counties. They have vaulted to the top of the global health agenda — the UN made them a signature issue during this year's General Assembly. Through an association called the International Food and Beverage Alliance, the world's largest processed food and drink companies — including Nestle, PepsiCo, Kraft, and others — actively participated in negotiations leading up to the summit in September, sitting in on ministerial meetings and chairing working groups.⁠ The director of global health policy at PepsiCo, Derek Yach, helped shape industry's prominent role. Yach was a UN official — executive director of non-communicable diseases at the WHO — before he moved to the private sector in 2007.

Here fundamental business interests collide with global health concerns, too. Soft-drink and snack companies make a living by reducing whole foods into easy-to-manufacture processed ones — the kinds of foods that increase the risk of developing NCDs. To maintain their financial health, these firms need to sell more of their products in the very countries where NCD deaths are rising. With sales in developed countries flat, the industry now relies on increasing revenues in emerging markets to sustain future growth. Between 1982 and 2000, U.S. companies quadrupled their investments in overseas food processing companies, and sales of processed foods overseas grew from $39.2 billion to $150 billion.⁠ The average Mexican now consumes nearly 30 gallons of Coca-Cola drinks every year, more than the average American. Rates of NCDs have risen accordingly.⁠

The industry most involved in global health initiatives is undoubtedly the drug industry. Novartis donates drugs to the WHO to fight leprosy and develops new vaccines for dengue and tuberculosis. Merck and Pfizer have made important drug donations to tackle diseases such as onchocerciasis and trachoma. But big pharma is in a similarly complicated position. The most effective global health interventions undermine their core business, which is selling brand-name drugs at premium prices. That's why Novartis is currently attempting to weaken India's patent laws in ways that the aid group Médecins Sans Frontières says will have a “devastating impact” on the poor's access to medicine. In 1998, 39 top drug companies sued the South African government for implementing a law designed to make antiretroviral drugs more accessible to poor people dying of AIDS.

It's not that the WHO and other public sector leaders fail to recognize their new partners' conflicts. The fact is they have nowhere else to turn. In 1950, the WHO's budget derived from assessed dues on member nations. Over the past few decades, that financing stream has run dry. In reaction to the perceived politicization of UN organizations such as UNESCO and the WHO, major UN donors introduced a policy of zero real growth to the UN system's budgets in 1980 and of zero nominal growth in 1993.

Starved of public financing, the WHO has had to rely upon voluntary contributions from donor countries, private philanthropies, companies, and NGOs. Unlike funds from assessed dues, individual donors can earmark “extrabudgetary” monies for whatever specific purpose they like, thus circumventing WHO control. In 1970, these private contributions constituted a quarter of the agency's budget. By 2008, they constituted nearly 80 percent. Thus it is now the private donors, not the WHO, who can call the shots in Geneva, and thereby shape the global health agenda.

Their influence is clear. The WHO allocates its regular budget to the diseases that account for the most mortality around the world. Extrabudgetary funds, in contrast, support different interests. According to an analysis of the agency's 2004-05 budget, 91 percent of the WHO's extrabudgetary funds were earmarked for diseases that account for just 8 percent of global mortality. Given the dominance of extrabudgetary funds in the WHO's overall expenditures, the WHO ended up spending 60 percent of its funds on illnesses that account for just 11 percent of global mortality. A substantial portion went toward developing vaccines for infectious diseases, which are in line with private industry's general preference for expensive, high-tech research over cheap, low-tech prevention. It's hard to see how such a misalignment between the needs of the world's sick and the distribution of WHO's funds helps the agency meet its core mission.

This is not to say that the world's poorest and sickest do not need the attention of the mining industry and fast-food makers. Voluntary commitments from food processing companies have taken hundreds of thousands of tons of sugar, salt, and fat out of popular products. Since 2004, Nestle has reduced the amount salt in its products by more than 6,800 tons, and sugar by more than 290,000 tons.⁠ Thanks largely to private-sector involvement, external financing for the fight against malaria has skyrocketed, from about $100 million a year in 1998 to over $1 billion by 2008. While their current dominance over the global health agenda is counterproductive, these companies need to be at the table, despite their conflicts of interest.

Nor would it be feasible, in today's world of increasing privatization, to go back to the old model in which the public sector subjects the rest of the world to its global health edicts. Rather, private sector involvement should be expanded to include those companies whose financial interests directly align with those of global health. In addition to mining companies, the fight against malaria could, for example, include insurance companies and tourism operators who will reap long-term profits from healthier customers and less fearful tourists. Similarly, the battle against NCDs could enlist the participation of local farmers and ranchers whose businesses will grow more nutritious, locally sourced whole foods and sell them to more people. Private companies like these, with health-aligned business interests, are much more likely to realize the promise of private-public partnerships than those that have damages to hide.

So far, these other players have largely stayed on the sidelines, and there has been little discernible effort to change that. Cash-strapped for too long, many global health advocates are basking in the resources from their wealthy new private sector partners. But to set the global health agenda right, they'll need to spend some of those resources reaching out to new companies and industries with compatible concerns, even if those companies don't sign big checks. With a wider base of private sector donors supporting it, the WHO — still an unparalleled source of public health expertise and uniquely accountable to the international community — could re-establish its authority over the global health agenda, not to mention its own budget.

Sonia Shah is reporting on the privatization of global health for The Investigative Fund at The Nation Institute, now known as Type Investigations.

Sonia Shah is a science journalist whose writing has appeared in the Wall Street Journal, The New York Times, and elsewhere.