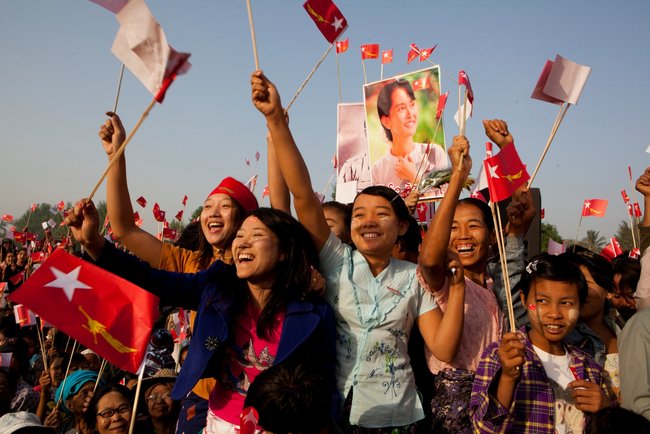 Parliamentary by-elections on Sunday will mark a first, critical step in the transition from authoritarianism for an opposition that has suffered more than 20 years of prison, harassment, exile and the brutality of successive military rulers.

At best, the National League for Democracy — the party of the country’s most famous dissident, Daw Aung San Suu Kyi — will win less than a tenth of parliamentary seats in the Southeast Asian nation (renamed Myanmar by the military government). Only 45 constituencies out of 659 are up for election, to fill seats vacated by legislators when they take positions in the government.

The N.L.D. boycotted the last general election in 2010, which was marred by widespread cheating and fraud. That election was meant to be the final step in what the Burmese junta had billed as a seven-step “Road Map to Discipline-Flourishing Democracy.”

Now, two years later, after a sweep of political reforms that included an easing of media censorship and the release from prison of dozens of prominent dissidents, the N.L.D. is contesting all available constituencies.

Aung San Suu Kyi, who led the N.L.D. to a landslide victory in 1990 but ended up spending 15 of the past 21 years under house arrest, is widely predicted to sweep the vote in rural Kawhmu, a network of bamboo-and-thatch hamlets that are mostly only accessible by motorbike.

Whatever the gains for the N.L.D. on Sunday, they will be too few for the party to push through Parliament the major reforms it has promised, including amendments to glaringly undemocratic clauses in the 2008 Constitution. Nonetheless, the openness of the electoral process in past weeks — most notably the participation of the charismatic Aung San Suu Kyi and some dynamic new N.L.D. candidates — has already marked a triumph for the party and for the broader opposition, which only months ago was forced to operate under severe civil and political constraints.

Myanmar’s dissidents — veteran revolutionaries, civil society activists and N.L.D. politicians — are taking full advantage of the new political space to ensure that the reforms of recent months are not reversed, and, more important, that they lead to deeper changes.

Aung San Suu Kyi, now 67, remains unchallenged as their leader. Since her release from house arrest a week after the 2010 elections, she has energized the opposition and has ensured that Myanmar stays on the map of global consciousness. Crowds have poured out to greet her as she has crisscrossed the country in the searing tropical heat to endorse each N.L.D. candidate, tweaking her stump speech to address local grievances, high-fiving bystanders and waving and shaking hands through the roof of her S.U.V.

If people were suddenly unafraid to attend its rallies, said U Win Tin, the 83-year-old party strategist who returned to his old position within days of his release from 19 years in prison, it was only to see “the Mother,” as people now call Aung San Suu Kyi. Initially, Win Tin had advised Aung San Suu Kyi against participating in the elections out of concern that the N.L.D. was still too weak.

To overcome that concern, and to strengthen the base of a party born in a massive pro-democracy uprising in 1988, Win Tin, Aung San Suu Kyi and the aging leadership of the N.L.D. eliminated a rigid hierarchy that had alienated younger activists. They also reached out to dynamic young leaders elsewhere in the opposition, some of them freshly released from prison.

Naing Ngan Lin, at 35 the N.L.D.’s second youngest candidate, is representative of the new blood. He is running in Naypyitaw, the sprawling new capital city largely populated by government servants or unskilled laborers.

“When I first came here, people didn’t like me,” he said. “I was not famous, not a former political prisoner. I saw it on their faces.” Born and raised in a northern Rangoon slum, he has yet to visit any of the city’s grandiose new monuments — a vast pagoda, a much-touted zoo, a gem museum. Instead, he has spent past weeks zigzagging between stretches of half-built mansions and palm-thatched villages where his constituents complain of being pushed off their farms, forced out by big companies run by officers who control the country’s economy.

The younger candidates have held mass rallies, stumped and pamphleteered in ways long impossible, fighting back small restrictions and bans from local authorities on the use of this football field or that pagoda.

In one constituency, Mingalar Taung Nyunt, N.L.D. members recently worked through the night to set up a rock concert in support of Phyu Phyu Thin, a local candidate who was already something of a celebrity for maintaining an H.I.V./AIDS clinic at a time when the military junta refused to acknowledge the disease existed. By the time subversive political lyrics began to blare, it was too late for the city council to stop it.

The party’s repertory includes a rap song based on a colonial-era revolutionary poem — “Wake up, Myanmar!” — composed by the N.L.D. candidate Zay Yar Thaw, a well-known rapper who spent years in prison as co-founder of a dissident youth group called Generation Wave.

The N.L.D. flag — a fighting peacock flaming gold against a scarlet backdrop that only months ago was a ticket to prison — is now displayed proudly on handbags, cars, T-shirts, even foreheads and cheeks. N.L.D. offices have sprung up in private homes in villages and towns across the country.

Testing the limits of the politically possible extends across sectors. Media censorship still restricts news stories on touchy subject such as monasticism, the civil war raging in northern Kachin state or the business tycoons with ties to senior generals. But journalists now respond to reprimands from the Press Scrutiny Board by publishing anyway.

A campaign is underway to crack a telecommunications monopoly on SIM cards; factory workers have held strikes for better pay and conditions; and several groups are fomenting popular opposition to various dam and oil rig projects, following the success of a campaign that finally resulted in the suspension of work on a Chinese-backed hydropower project at Myitsone.

To the dissidents, there is a critical distinction between the reforms of past weeks — which one political leader calls mere “corrective measures” — and the deeper changes in everything from education to the economy that they believe would enable Myanmar to rise again.

These will require more than the handful of parliamentary seats that the opposition is likely to gain on Sunday.

“They cheated in 2010, they want to be seen as neutral in 2012,” said Phyo Min Thein, an N.L.D. candidate and former political prisoner, of the generals. “But no one can say they will be neutral and independent in 2015,” when the next general elections will be held. “Sanctions will be lifted, there will be a legal government, then in 2015 a question will appear. That is, in 2015, the N.L.D. will win. Clearly, it will win. But the question is, will they give up power?”

Delphine Schrank is a former staff writer for The Washington Post whose research in Myanmar is made possible by a grant from the Nation Institute’s Investigative Fund, now known as Type Investigations.

Delphine Schrank is an editor at the Virginia Quarterly Review and a former foreign correspondent for The Washington Post.