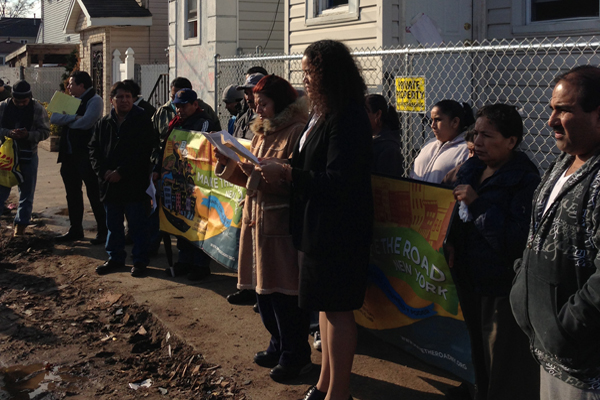 Undocumented immigrants in Staten Island protest a lack of assistance in the wake of superstorm Sandy. Second from right, holding the sign, is Maria Raquel. | Credit: COURTESY MAKE THE ROAD NY/CITY LIMITS

When New York City unveiled plans last Wednesday to spend the bulk of its first $1 billion in federal aid for Hurricane Sandy on loans and grants for homeowners and on shoring up public housing and utility networks against future disasters, there was no mention of one of its most unprotected populations — undocumented immigrants.

The funds represent nearly $1.8 billion destined for the city in the first stage of a $51 billion federal recovery package for New York and neighboring states. “These funds will help New Yorkers who were the hardest hit by Sandy get back on their feet and help communities build back,” Mayor Michael Bloomberg said.

The most vulnerable New Yorkers bore the brunt of the storm's wrath — middle- and lower-income households, or those less able to quickly recover from a disaster of such magnitude. The undocumented were particularly susceptible, even those who had children or grandchildren born in the United States and thus eligible for federal aid.

“There's a lot of confusion and uncertainty,” says Sara Cullinane, Sandy relief coordinator for the non-profit Make the Road New York, a grassroots organization assisting storm victims on Long Island and Staten Island. “I knew it was a disaster when it hit but it feels like there's a second disaster, which is just figuring out how to access aid and how to make the system work.”

Last week, a spokeswoman for Bloomberg said in an email that “details for the recovery programs … are in the process of being worked out.” Governor Cuomo's office did not return a call seeking comment.

On Staten Island, Sandy left Juan Antonio Perez, 43, and his wife Blanca Astorga jobless and nearly homeless. The storm flooded the basement of the Midland Beach house the couple and their three daughters shared with three family members.

The boiler was ruined. The landlord initially tried to kick the family out, according to Perez and immigrant advocates. They'd had no heat or hot water for nearly two months. After the storm, the Staten Island restaurant where Perez worked closed. Astorga used to make money selling food to local immigrant workers but now many are themselves unemployed.

To begin the boiler repairs, Perez says, the landlord demanded $5,000. Perez scrounged about $3,000 from relatives and friends staying with his family after being displaced by the storm. “I pleaded with the owner to let us stay,” says Perez, an undocumented immigrant from the Mexican gulf coast state of Veracruz. The boiler was repaired days before Christmas.

“It's a tragic situation,” says Sebastian Sanchez, a legal advocate with Make the Road New York. “I offered to help negotiate with the landlord but they're really scared about losing their home on top of having lost their jobs.”

“I don't want problems with the owner,” says Perez, who has lived and worked in New York for seven years.

Perez's eldest daughter received some federal assistance to help her find an apartment because her daughter was born in the United States, he says.

“As far as anything that helps them move forward with their lives, they are not getting that,” Sebastian Sanchez says, referring to unemployment benefits or rental assistance.

Like many survivors, Perez and his family came to depend on food distribution centers. But the one closest to him recently started asking for FEMA numbers.

After the storm, Perez secured part-time work cleaning flooded basements. It was a dangerous job, performed without protective gear. “But I needed the work,” he says. When that tailed off he got occasional work washing dishes but the job is not steady.

Perez recently walked to a FEMA center on Staten Island to inquire about post-Sandy construction and cleaning jobs. He was handed an Internet address.

Without a Social Security number, immigrants have been denied federal disaster unemployment insurance or Federal Emergency Management Agency cash assistance for temporary housing and replacing damaged possessions. Some fear that seeking help could lead to detention or deportation. Some who have sought help, and have eligible family members, say they've been denied but not told why. Additionally, advocates say, FEMA rejects applications with more than one person requesting aid from the same address, even though many immigrants are doubled and tripled up in apartments.

Donald Caetano, a FEMA spokesman, would not comment directly on the the assertion that eligible immigrants had been denied aid. “We encourage all eligible applicants to register,” he said via email.

The New York Immigration Coalition and other advocacy organizations have requested that city and state officials set aside funds for undocumented storm victims. They're still awaiting a response.

“We here in the city of New York have a long history of ensuring that all New Yorkers, regardless of their immigration, status have access to basic services,” Jackie Vimo, advocacy director for the New York Immigration Coalition, says. “This is something that we did after 9/11 and we definitely haven't seen either the city or the state doing that now.”

The mayor's office, acknowledging that many immigrants affected by the storm continue to struggle, last month dispatched outreach teams to assist eligible families in soliciting FEMA assistance. The teams, from community-based organizations, also attempt to connect families to other services, including food assistance, counseling and healthcare, according to a statement from the mayor's office.

“It's not too late for the city and the state to fill in the gaps,” Vimo adds. “There's really very little that immigrants can get.”

Like much of the city, Midland Beach — once largely Irish- and Italian-American — has changed over the years. Staten Island's Latino population has risen by more than 50 percent since 2000, with more than 81,000 residents, mostly Mexican immigrants, according to Census figures.

The enclave was one of the hardest hit places in the city during Sandy. Eight people drowned in Midland Beach, where many homes were submerged in more than a dozen feet of water. Its poorest residents endured hunger and cold for days and weeks after the storm, according to advocates.

Maria Raquel Sanchez, her son and his pregnant wife and their four-year-old son, and another relative rode out Sandy in the home they rented in Midland Beach. The roof shook in the howling wind. Seawater gushed into the house. They sought refuge in the space under the roof. She thought they would die.

“We started praying, 'My God, if you're going to take us, take us together. Don't leave anyone behind to suffer alone,'” she recalls in tears. “My grandson held my hand and tried to comfort me. 'I love you very much mamita,' he said. 'Don't cry.'”

Everything they owned turned into a mud-caked heap — mattresses, clothes, furniture. The home owner dumped what was left on the street and informed them the house was uninhabitable. Sanchez says he kept the rental deposit.

Sanchez and her family stayed with her brother for a couple of weeks before his landlord threatened to raise his rent. They stayed with another relative a few days until the same thing happened. Now they're staying with yet another friend.

An undocumented immigrant who has lived on Staten Island for 21 years, Sanchez lost her jobs caring for children when her employers left the borough after the storm. Her son still works as a landscaper, but her daughter-in-law lost her housekeeping job.

The daughter-in-law qualified for FEMA aid because her son was born in the U.S., Sanchez says. The rest of the family did not.

Many undocumented immigrants, some eligible for FEMA benefits, were “afraid to come forward and apply for fear of deportation or reprisal,” according to a report compiled by Make the Road New York.

“The presence of military uniforms on the ground scared people,” says Gonzalo Mercado, executive director of El Centro del Inmigrante, a day laborers' program on Staten Island. “One family was so scared they wouldn't answer the door to the consul of Mexico.”

In two decades on Staten Island, Sanchez worked as a child care worker, an office cleaner and Laundromat attendant. Last month, she went to the Mexican consulate and received a one-time $450 payment from funds set aside for hurricane victims.

“I told the senorita at the consulate that I didn't have a job,” Sanchez says. “I wanted to know if they could help me find a job. She laughed and said, 'You want the government to take care of you.' I said, 'No, I only want to work.'”

This article was produced in partnership with The Investigative Fund at The Nation Institute, now known as Type Investigations.