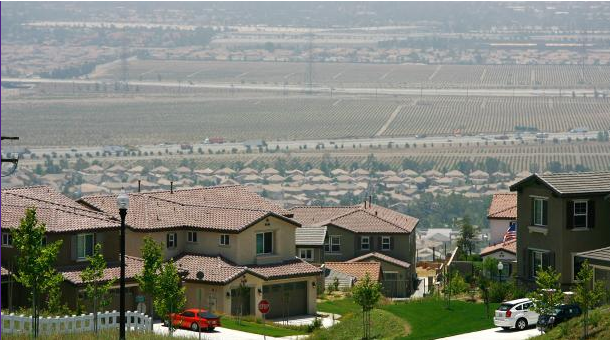 A neighborhood in San Bernardino County, Calif. A growing number of US homeowners are renting rooms to recovering addicts and turning their properties into so-called "sober homes." It's a growing but s... | Credit: COURTESY MARKETPLACE/DAVID MCNEW/GETTY IMAGES

A sober home is exactly what it sounds like. It’s a place people can go when they first come out of rehab. Somewhere to live, drug- and alcohol-free. Residents take drug tests, attend 12-step meetings and have curfews to keep them on the straight and narrow.

Realtor Brian Wall says sober homes have become a lucrative business for him. A single sale can net him up to $40,000. He says the perfect sober house has lots of bedrooms, and is far away from nosy neighbors. That’s because these homes can turn into overcrowded boarding houses that no one wants to live next to.

Like a rundown house I visited in the San Fernando Valley. More than 20 men live in the home, and they share just one bathroom with no door. The owner of the property refused to do an interview, but one of the residents reluctantly showed me around.

Tenants say even the garage was being used as a bedroom. There were bunkbeds to sleep a dozen men but there was no heat, running water or electricity. When I went to see for myself, the house manager demanded I leave.

Despite the appalling conditions, a bed here still costs as much as $500. When the house is full, the owner can net over $10,000 a month. Realtor Brian Wall says this kind of money is attracting people to the sober home business.

“If I’m not doing it to make money, then why am I doing it?” Wall says. “If I’m doing it for passion, that’s great, but that doesn’t help me open up 10 houses.”

But Jeff Christensen says the idea of sober homes is supposed to be about helping addicts get back on their feet.

Christensen, director of the Sober Living Network, says, “If you want to call this a business, that’s great. We don’t. We call it service to these people. If we get back to the fundamentals of what this about, it’s a matter of life and death for the people who live there.”

Christensen says the problem is anyone can open up a sober home. And it’s almost impossible to shut the bad ones down. That’s because addicts are protected under the Americans with Disabilities Act.

“These bad landlords are clever,” Christensen says. “They’re going, ‘Hey, if I say I’m a sober living, I can hide behind federal protections.'”

So how do you help recovering addicts when so many people are just trying to make a buck off them? Christensen says one solution is self-regulation. That’s what his nonprofit organization’s all about — getting sober home owners to agree to follow certain rules.

“We do inspections, we go out and we take a look at their management practices, require them to be trained,” Christensen says.

One of the sober home owners who took that training was Cristofer Justin. He owns and manages six sober homes near San Diego.

Justin finds recovering addicts at local churches, probation and parole offices, and through ads on Craigslist. Tenants pay him up to $500 for a single bed. But unlike some sober home owners, Justin actually offers services like drug testing and counseling.

“You have to be extra attentive to make sure that they don’t have opportunities to fall back on old habits and old attitudes,” Justin says.

But soon these sober homes, good or bad, may disappear. At least in Los Angeles. The city council is trying to pass an ordinance to shut them all down. Sober living advocates say it could leave thousands of recovering addicts with nowhere to go.

This article was produced in partnership with The Investigative Fund at The Nation Institute, now known as Type Investigations.Lisa Desai contributed to the reporting of this story.

Sarah Gross is a veteran journalist with experience across all media. She’s obsessed with grammar as well as with good stories, well told.