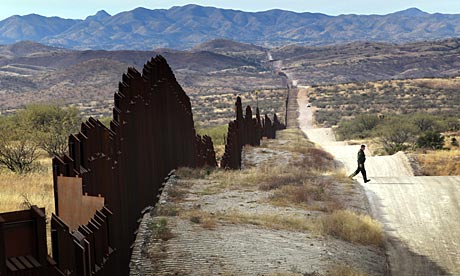 The only remains left of Alfonso Martinez Sanchez, when his 19-year-old daughter Gladys finally tracked him down, were a jacket, a watch, a key chain and a body so degraded that it could only be identified by his dental records. The 39-year-old butcher, construction worker and father of five had been living in the United States for more than twenty years. One day in March, his wife sent him to the corner store where the family was living in Vista, California, for milk and tortillas. He never came back.

A sheriff's deputy asked Sanchez for his ID, and then arrested him and turned him over to federal agents, who deported him to Tijuana. He connected there with a coyote, who arranged to help him cross the increasingly militarized US border. He was caught and returned three times. The fourth time, he was guided into the remote Arizona desert.

Since the mid-1990s, increased border security has been the cornerstone of US immigrationpolicy. Intimidating border fences were built in urban areas along the Mexican border, diverting migrants into vast, open regions of inhospitable terrain. The plan was referred to as “prevention through deterrence”; policymakers thought that they could make the crossing so inhospitable that hopeful migrants would think twice before attempting the journey.

Channeling migrants away from crowded, urban areas would also make it easier for border agents to intercept the travelers. According to one Border Patrol video from 2009: “They'll move out to the more rural and remote areas … we now have the tactical advantage and we only need to exploit that advantage.” The US government now patrols 651 miles of fence with 18,500 agents, night sensors, heat sensors, motion detectors, black hawk helicopters andunmanned drones at a cost of $11bn a year.

Policymakers succeeded at making the crossing inhospitable. The typical migrant path is now a tangled web of trails leading north from Mexico to Arizona and into the Sonoran Desert — where temperatures can reach 120 degrees, and the desert is filled with snakes, scorpions and smugglers. It has literally become a valley of death. According to research by the CUNY Graduate School of Journalism, the number of border crossings has dropped nearly 80 percent from peak levels a decade ago — but death rates have actually increased. Those who try to cross into the country now are far more likely to die than previously.

What the strategy did not account for was human desperation.

According to a study from the University of Arizona, based on interviews with 1,100 deported migrants over four years, one in four had at least one child back in the United States who was a legal American citizen; one in three considered the United States, not Mexico, to be their home. A significant number of these deportees, like Sanchez, would try again and again, and risk their lives, to be reunited with their American families.

For the past decade I have witnessed this human tragedy first hand. I have interviewed would-be border crossers, and seen corpses in the desert and in the morgues of border counties. I even illegally crossed the US-Mexico border myself, with a smuggler and a group of migrants, walking the Arizona desert for days in 110-degree heat.

Almost 20 years after US policy began forcing migrants through treacherous terrain, thousands of migrants have died on US soil, and the death rate only continues to escalate. For a forthcoming segment for PBS's Need to Know, we spoke with a coroner in Pima County, Arizona, named Dr Greg Hess. When Hess worked as a coroner in Milwaukee, Wisconsin, he typically had just one unidentified body per year. Now he has one thousand.

Congress is in the midst of considering an immigration reform bill that demands more of this deadly deterrent strategy — $4.5 billion more — as a condition for any path to legalization for the estimated 11 million immigrants currently living in the country without working papers. The legislation would make “securing the border” a trigger before any of these established immigrants can apply for legal status. That trigger could easily become a death sentence for hundreds more mothers and fathers of American children.

Sanchez had crossed the border with another migrant, an agricultural worker who survived the ordeal. His last words to his traveling companion were: “I don't want to die. I don't want to die. I want to get back to my kids. I have to make it with my kids.” His daughter, Gladys, says she thinks about those words every day, thinks about him dying, by himself, in that lonely, hostile desert.

Lawmakers have debated the issues of border security and illegal immigration for decades. In the meantime, over 5,000 migrant bodies have been recovered on US soil. It is time for the human toll of sealing the border to enter that debate.