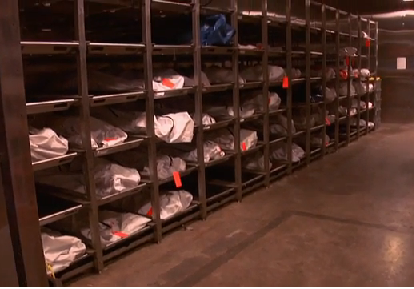 The unidentified bodies of migrants in the Pima County, Arizona, morgue. Image: NEED TO KNOW

This broadcast is the third in a series; see Part 1 and Part 2.

While the number of illegal crossings at the border has plummeted dramatically — roughly half the number than during peak years — just as many people are dying. Meaning for those coming into the country illegally, it is now more deadly, more lethal, than at any time in recent U.S. immigration history.

For years the age of those dying has been constant — they have been young — but today, these statistics are changing. According to two recent studies, what may be compelling older immigrants to risk death in the desert is this: more and more often, they are mothers and fathers who have long had homes in the United States, with American children who depend on them.

This segment was produced in partnership with The Investigative Fund at The Nation Institute, now known as Type Investigations.