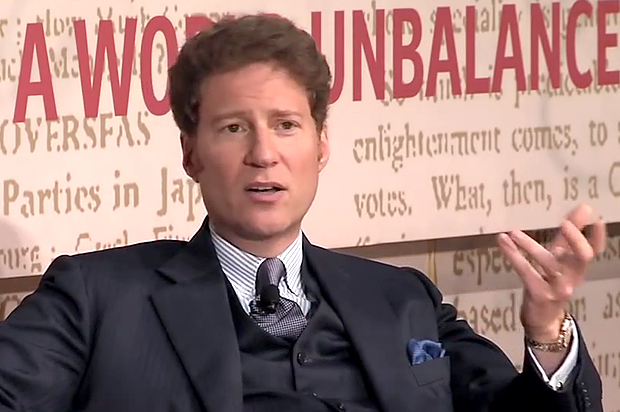 On the same evening last November that world powers announced an interim deal with Iran, halting its nuclear progress in exchange for a modest easing of sanctions, United Against Nuclear Iran (UANI) put out a statement complaining that the agreement was a “disappointment” and “provides disproportionate sanctions relief to Iran.” The group’s executive director, former US diplomat Mark Wallace, suggested that no sanctions relief was appropriate as part of an interim deal: “By rolling back sanctions now, the international community is significantly lessening the pressure on Iran’s economy.”

That same group, at the end of July, turned up in a bit of intrigue: the New York Times revealedthat the Justice Department had stepped in to a defamation suit against UANI to prevent the disclosure of documents revealing the group’s donors, among other information. UANI serves as a key pressure group for the enforcement of sanctions, frequently issuing reports and press releases about companies doing illicit business with Iran.

The Times reported that lawyers representing Greek shipping magnate Victor Restis, the plaintiff in the suit, accused UANI of receiving foreign funding and shaking down companies for donations. UANI had earlier accused Restis and his company of being “front men for the illicit activities of the Iranian regime.”

But it remains unclear what potential revelations the Justice Department is concerned about.

Among the pieces of heretofore undisclosed information the Justice Department’s shield might prevent from coming to light is the connection between UANI and one of the biggest investors in precious metals, Thomas S. Kaplan. Kaplan has emerged as one of the business world’s most outspoken proponents of investing in gold and other precious metals, investments he says will retain or appreciate in value during periods of political and economic unrest.

The nature of Kaplan’s ties to UANI aren’t entirely clear, but the links are apparent: Kaplan’s investment operations have shared several employees with UANI over the past six years, notably including UANI’s Wallace, who controls several mining ventures through the Tigris Financial Group with the billionaire. Together, the pair are betting big on investments in precious metals they say will retain or appreciate in value in an unstable economic and geopolitical environment. By Tigris’ own account, it stands to make money in the case of “political unrest in the Middle East” — exactly the kind of instability many experts think will become inevitable if naysayers of diplomacy with Iran have their way.

UANI and its allies “play the politics for the short-term but they don’t offer anything in terms of answers for the long-term,” a former Obama Administration official who worked closely on Middle East policy told Salon. You get the sense that … they’re not really interested in ensuring that Iran does not acquire a nuclear weapon. Iran bashing for pro-Israel groups is very common, but I’m concerned that they don’t understand that failure to address this issue will ensure that Iran gets the bomb or we’re headed toward war. And a war in this region at this time will look more like World War III than a ‘cakewalk.'”

Founded in 2008, UANI hosts a powerhouse advisory board of former politicians, intelligence officials and policy experts — including former intelligence chiefs from Germany, Israel and the UK; Wallace is frequently cited in major media outlets, and all three outside witnesses scheduled to appear at a recent Senate Foreign Relations committee hearing are affiliated with UANI (one did not attend, reportedly due to illness).

According to tax filings, Wallace, a former George W. Bush-appointed US ambassador to the UN, hasn’t drawn a salary from UANI since the group paid him $93,744 in 2008 and $10,416 in 2009, although he has testified three times before Congress as a UANI official.

But Wallace, according to UANI’s website, holds another, likely more lucrative position, serving as the CEO of the Tigris Financial Group, an investment group controlled by Kaplan.

The connection between UANI and a billionaire gold evangelist might seem strange, but Kaplan’s promotion of precious metals is often coupled to dire predictions about coming geopolitical unrest.

Kaplan, a Francophile New York philanthropist with a penchant for large cats, enthusiastically urges investors to put their money in gold and silver to hedge against political and economic instability. He advocates buying silver and gold as the only safe investment in an uncertain world.

A 2010 Wall Street Journal profile of Kaplan — headlined “A Billionaire Goes All-In On Gold” — described Kaplan’s investment as a “nearly $2 billion bet on gold, more than the Brazilian central Bank’s bullion is currently worth.”

The 2002 annual report for Kaplan’s Apex Silver Mines, Ltd. — which has since gone bankrupt — contained an insight into his thinking. The report, issued by Kaplan and Apex’s CEO, Keith R. Hulley, asks investors to “consider the following factors: destabilization in the Middle East and Persian Gulf, tensions between India and Pakistan, the potential for nuclear confrontation with North Korea and Iran, […] religious extremism and terrorism on a global scale and corporate hooliganism.”

The solution, explained Kaplan, is that the “trend to invest in companies with real assets and exposure to the non-correlated commodities sector is likely to prove to be long-term and secular rather than cyclical.”

In other words, if you believe political instability is likely, invest in assets like those mined by Apex.

And Wallace, as CEO of Tigris, oversaw similar language in a 2011 prospectus — after his stint with UANI commenced — for the Sunshine Silver Mine Corporation, an Idaho mine owned by the group in which he played an active role in acquiring. “Investment demand for silver exposure remains strong,” said the prospectus, which was filed with the SEC, “driven in part by continued U.S. dollar weakness, ongoing economic uncertainty in Europe and political unrest in the Middle East.”

Ties between UANI and Kaplan, however, go beyond Wallace’s double role as the head of UANI and the CEO of Tigris.

At least two individuals other than Kaplan served in full-time or advisory roles concurrently at the Electrum Group, a Kaplan-controlled company, and UANI. Another Electrum employee started as an intern with UANI.

According to his LinkedIn profile, lawyer Steven S. Drachman worked as the chief compliance officer of Electrum from January 2012 to March 2013. Since April 2013, he has served as a “senior consultant” to various companies, including UANI. (Drachman declined to comment about his role at both organizations.)

Lara Pham’s LinkedIn profile showed she worked as an analyst at the Electrum Group from February 2009 to August 2013 and as director of operations of UANI from January 2012 to October 2013.

Eugene Kim’s profile shows he was a summer intern at UANI from June to July 2009, and went on to work as an associate at Electrum from July, 2011 to July, 2014. (Neither Pham nor Kim responded to requests for comment.)

Though Kaplan isn’t listed anywhere on UANI’s public disclosures or on the group’s website, he acknowledged his connection to the anti-Iran group while receiving the French Legion of Honor insignia from French Ambassador François Delattre in April in New York.

“A friend’s comment that one day our kids might ask us what our generation did when we knew what the Iranian’s intentions were prompted me to become part of something bigger,” he said, his words appearing only in a video recording of the event. “Hard to know what the outcome will be but I do know that as much as United Against Nuclear Iran may not have had Tomahawk missiles and aircraft carriers at its disposal, we’ve done more to bring Iran to heel than any other private sector initiative and most public ones.”

The published transcript of his remarks contained no mention of UANI or the comparison of the group’s work to advanced weaponry, presumably to be directed at Iran’s nuclear facilities.

UANI and the Tigris Financial Group did not respond to requests for comment.

Indeed, Kaplan has been a devoted philanthropist to various Jewish and Israel-related causes, and his commitment to stopping what he believes is Iran’s push for a nuclear weapon is not inconsistent with the ideology he expressed at the award ceremony. But that doesn’t contradict the other, well recorded, set of facts: Kaplan and Wallace are betting big on a series of investments that they say will appreciate in or retain value if there is instability in the Middle East. And UANI, a group that has relentlessly criticized the Obama administration’s efforts to reach a diplomatic compromise with Iran, is tightly tied to the individuals and companies that are making those bets.

Eli Clifton is a reporting fellow with The Investigative Fund at The Nation Institute.