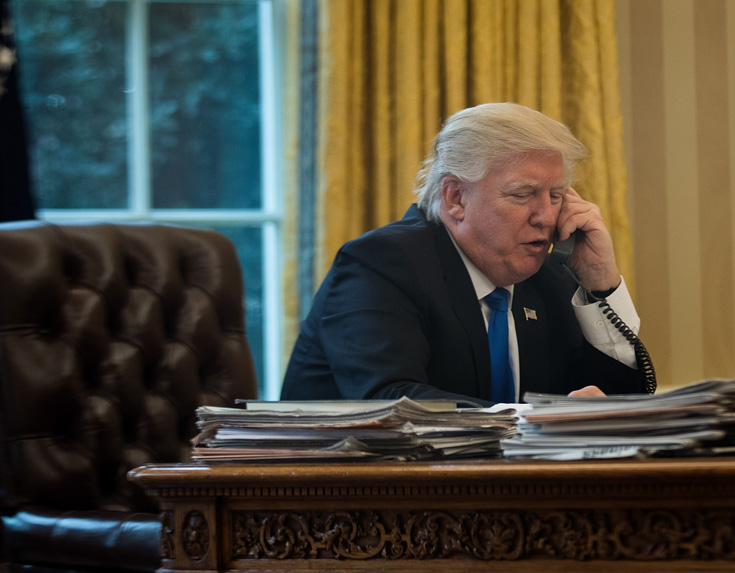 A leaked copy of a draft executive order titled “Establishing a Government-Wide Initiative to Respect Religious Freedom,” obtained by The Investigative Fund and The Nation, reveals sweeping plans by the Trump administration to legalize discrimination.

The four-page draft order, a copy of which is currently circulating among federal staff and advocacy organizations, construes religious organizations so broadly that it covers “any organization, including closely held for-profit corporations,” and protects “religious freedom” in every walk of life: “when providing social services, education, or healthcare; earning a living, seeking a job, or employing others; receiving government grants or contracts; or otherwise participating in the marketplace, the public square, or interfacing with Federal, State or local governments.”

The draft order seeks to create wholesale exemptions for people and organizations who claim religious or moral objections to same sex marriage, premarital sex, abortion, and trans identity, and it seeks to curtail women’s access to contraception and abortion through the Affordable Care Act.

The White House did not respond to requests for comment, but when asked on Monday about whether a religious freedom executive order was in the works, White House spokesman Sean Spicer told reporters, “I’m not getting ahead of the executive orders that we may or may not issue. There’s a lot of executive orders, a lot of things that the president has talked about and will continue to fulfill, but we have nothing on that front now.” 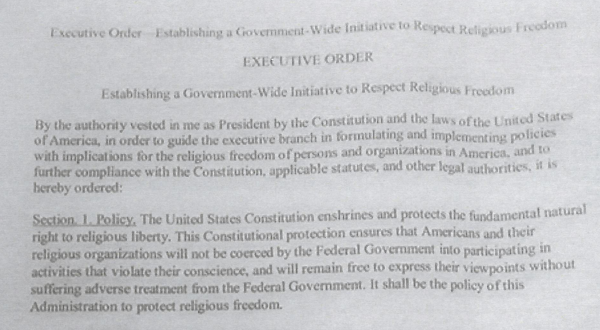 Language in the draft document specifically protects the tax-exempt status of any organization that “believes, speaks, or acts (or declines to act) in accordance with the belief that marriage is or should be recognized as the union of one man and one woman, sexual relations are properly reserved for such a marriage, male and female and their equivalents refer to an individual’s immutable biological sex as objectively determined by anatomy, physiology, or genetics at or before birth, and that human life begins at conception and merits protection at all stages of life. “

The breadth of the draft order, which legal experts described as “sweeping” and “staggering,” may exceed the authority of the executive branch if enacted. It also, by extending some of its protections to one particular set of religious beliefs, would risk violating the Establishment Clause of the First Amendment to the Constitution.

“This executive order would appear to require agencies to provide extensive exemptions from a staggering number of federal laws—without regard to whether such laws substantially burden religious exercise,” said Marty Lederman, a professor at Georgetown University Law Center and an expert on church-state separation and religious freedom.

The exemptions, Lederman said, could themselves violate federal law or license individuals and private parties to violate federal law. “Moreover,” he added, “the exemptions would raise serious First Amendment questions, as well, because they would go far beyond what the Supreme Court has identified as the limits of permissive religious accommodations.” It would be “astonishing,” he said, “if the Office of Legal Counsel certifies the legality of this blunderbuss order.”

The leaked draft maintains that, as a matter of policy, “Americans and their religious organizations will not be coerced by the Federal Government into participating in activities that violate their conscience.”

It sets forth an exceptionally expansive definition of “religious exercise” that extends to “any act or refusal to act that is motivated by a sincerely held religious belief, whether or not the act is required or compelled by, or central to, a system of religious belief.”

“It’s very sweeping,” said Ira Lupu, a professor emeritus at the George Washington University Law School and an expert on the Constitution’s religion clauses and on the 1993 Religious Freedom Restoration Act (RFRA). “It raises a big question about whether the Constitution or the RFRA authorizes the president to grant religious freedom in such a broad way.”

In particular, said Lupu, the draft order “privileges” a certain set of beliefs about sexual orientation and gender identity—beliefs identified most closely with conservative Catholics and evangelical Christians—over others. That, he said, goes beyond “what RFRA might authorize” and may violate the Establishment Clause.

Lupu speculated that the language, as drafted, “might invite federal employees” at, for example, the Social Security Administration or Veterans Administration, “to refuse on religious grounds to process applications or respond to questions from those whose benefits depend on same sex marriages.” If other employees do not “fill the gap,” he said, it could “lead to a situation where marriage equality was being de facto undermined by federal employees, especially in religiously conservative communities,” contrary to Supreme Court rulings.

Jenny Pizer, senior counsel and law and policy director for Lambda Legal, said some of the language in the draft order is similar to language in a law passed last year in Mississippi, which a federal district court ruled violated both the Establishment Clause and the Equal Protection Clause. (The case is now on appeal.) Pizer said the draft order would appear to violate the Establishment Clause by listing a “particular set of religious beliefs and giving special government protection to people who hold those beliefs as opposed to different beliefs.”

Section 4 of the order, “Specific Agency Responsibilities,” requires HHS to issue a rule exempting any person or organization with religious objections from complying with the ACA’s preventive care mandate—42 U.S.C. 300gg-13(a)(4) —which includes contraceptive coverage. It requires HHS to ensure that anyone purchasing insurance on a health care exchange have the option of purchasing a plan that neither covers abortions nor “subsidize[s] plans that do provide such coverage.”

And it bars HHS from taking any adverse action against federally funded child-welfare organizations, including those offering adoption, foster, or family support services, that deny anyone these services “due to a conflict with the organization’s religious beliefs.”

Pizer said this language constitutes “a license to discriminate with public money in a series of contexts in which people tend to be vulnerable,” such as against LGBT children in foster care, which is federally funded. More broadly, she said, it would permit organizations receiving federal grants or contracts to provide child welfare services not only to refuse necessary care, but to refuse even to “refer the child to another agency or setting that would be protective and affirming and instead place the child in an environment that is aggressively hostile to who that child is, on religious grounds.”

Even during the George W. Bush administration, she noted, “there were protections in executive orders that beneficiaries of grantees and contractors were not to be discriminated against on the basis of sexual orientation and gender identity.”

Section 4 also requires the Department of Justice to establish a new section or working group dedicated to protecting “religious freedom.”

On Tuesday, the White House announced that it would continue President Obama’s executive order protecting federal employees from anti-LGBT discrimination. Yet the new draft order codifies a laundry list of claims advanced by the Christian right in recent years that the advance of LGBT rights has put the religious freedom of conservative Christians at risk. “They would say this is a nondiscrimination order,” said Lambda Legal’s Pizer. “We disagree. We would say being denied the ability to discriminate against others is not discrimination against you.”

UPDATE 2/2/17: A White House official, speaking with ABC News, did not dispute the authenticity of the draft religious freedom executive order, but officials said it is one of hundreds circulating, some drafted by the transition team, others by the White House, not all of which are likely to become policy. The official did not say who drafted this particular order.

This leak was obtained by The Investigative Fund at The Nation Institute, now known as Type Investigations. Please support nonprofit journalism today!