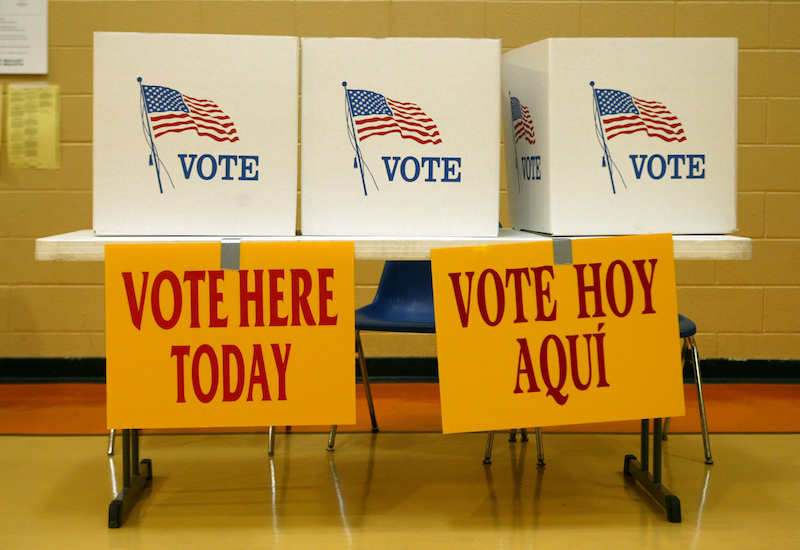 Signs in English and Spanish encourage voters to cast their ballots in New Mexico. Image: Steven Clevenger/Corbis via Getty Images

About 49 percent of the 235 million eligible voters in the United States cast ballots in the midterm elections, which produced important wins for Democrats across the country. One of the more surprising Democratic victories was in New York’s 11th Congressional District, which includes Staten Island and parts of southern Brooklyn. There, a Republican incumbent expected to win by five points lost by six, defeated by a blue wave that also flipped a State Senate seat that had been occupied by a Republican for 15 years. These wins are due to many factors, but one of them is that naturalized US citizens, who make up 30 percent of the district, came out in record numbers.

Brooklyn’s Arab-American population, at least 39,000 strong, according to the US Census, was once considered a low-turnout community, but last week several heavily Arab precincts had turnouts as high as 54 percent, significantly above the national average. Local community organizers, who have been galvanizing civic engagement in the community for the past two years, claimed victory. “Marty Golden once said Arabs don’t vote,” tweeted activist Widad Hassan, referring to the Republican state senator. “Today we came out in droves and voted him out.”

Prior to the election, the Investigative Fund had identified 18 congressional districts where the predicted vote difference between the winning and losing candidate was less than the number of Limited English Proficiency (LEP) voters in that district who did not have federal language accommodations. New York’s 11th is one of the most extreme examples under-accommodation in the country, but local activists were able to marshal Arabic speakers to the polls in record numbers. The district’s results showed that LEP voters can determine elections, but that they face substantial obstacles in doing so.

Federal language accommodations are provided under Section 203 of the Voting Rights Act and require elections administrators in certain jurisdictions to make all written materials available in the language of the relevant minority group and to hire interpreters who speak that language. LEP voters who aren’t accommodated in this way often have a difficult time exercising their right to vote. LEP voters have much lower participation rates than non-LEP voters, and studies have shown their participation rate is significantly higher where there are language accommodations.

In at least 13 of those 18 districts, the final vote difference between the two candidates was less than the number of LEP voters. On average, the unaccommodated LEP population exceeded the vote difference in these districts by a factor of five and a half. This means that for every decisive ballot, there were five and a half LEP citizens who couldn’t read the ballot in a language they understood and who didn’t have the benefit of an interpreter.

This same shadow also hangs over other races, including some of the most-watched contests of this election cycle. In Senate contest between Rick Scott and Bill Nelson in Florida, the unaccommodated LEP electorate was 37 times the difference in votes. The governor’s race is headed for a recount after the Republican, Ron DeSantis, had just 33,684 more votes than the Democrat, Andrew Gillum, as of the morning of November 11. In that state, there are 467,000 LEP voters without federal accommodation.

Georgia remains in the news, with many calling the results of some of its tightest races into question since the Republican candidate for governor, Brian Kemp, remained the secretary of state for the duration of the campaign and has been credibly accused of voter suppression. The state also has a sizable LEP population that local advocates have long been working to engage in the electoral process. The Lawyers Committee for Civil Rights Under Law is currently looking into reports that Hall County election officials interfered with interpreters who were assisting LEP voters, in violation of the Voting Rights Act. A spokesperson said it is contemplating legal action.

Georgia’s seventh district, north of Atlanta, has one of the largest LEP populations in the state, and a close election in which a winner (as of this writing) has not yet been declared. Republican incumbent Rob Woodall leads his Democratic opponent Carolyn Bourdeaux by a mere 901 votes as of the morning of November 11. Meanwhile, the unaccommodated LEP population of the district is greater than that difference by a factor of at least 26.

The federal government mandates that Gwinnett County, where 82 percent of the district’s residents live, provide Spanish-language accommodations. But through interviews with voters at poll sites in Duluth and Lawrenceville, we found that Latino voters were not aware of the accommodation. “I have never tried voting in Spanish, because I did not know I could vote in Spanish,” said Jovana Mondragon, originally from Colombia. She has voted in one prior election, in English.

One crowded polling place in Lawrenceville, the county seat, had a single bilingual poll worker to assist Spanish-speaking voters. Another polling place in a majority-white precinct in Duluth had no staff members who were able to assist Spanish-speaking voters, despite the federal mandate that the county recruit bilingual poll workers who speak Spanish.

“I saw the signs in Spanish, but I did not know you could vote in Spanish,” said Alajandrina Nunez, who came to the United States from El Salvador. “I am going to ask about that when I go inside.” The last time she voted, she said, she had to ask a stranger for help. If there is Spanish on the ballot, that would be much, much better, Nunez said.

Languages that are not part of a list first created by Congress in 1975 are not currently eligible for federal accommodation. That includes Russian, Haitian-Creole, Arabic, and many other widely spoken languages.

But what happened last week in southern Brooklyn, and the heavily Arab area of northern Bay Ridge, is a rare example of an LEP success story. “I don’t think there’s ever been an election, at least in my living memory…with any number like that out of Bay Ridge, especially for a midterm,” said Dan Hetteix, a co-host of the progressive podcast Radio Free Bay Ridge and longtime observer of the neighborhood’s local electoral politics. “If the turnout is that high in that area of the district, it’s almost entirely because of the organizing efforts of groups like Yalla Brooklyn, and everyone else who has been really working for years to get the Arab-American community to this point of civic engagement.”

According to Hetteix, neighborhood activists, and Democratic political groups involved in politics in southern Brooklyn, the Arab and Muslim vote was a critical factor in flipping the Republican-held congressional and State Senate districts of which Bay Ridge is a part. And progressive activists are heralding the work that was done by community organizers.

In advance of the elections, volunteers from the political-organizing group Yalla Brooklyn filled out a sample ballot with their preferred candidates and posted a photo of it on Facebook and in WhatsApp groups. On the morning of the midterms, a handful of them stood in the rain outside a Bay Ridge supermarket, showing the photo to passersby. But, one volunteer laughed, everyone they encountered had already saved the picture to their phones.

“It’s a quick fix,” said Hassan, “but it’s not ideal.” Hassan was part of a small but dedicated cohort who worked all day Tuesday to fill in a gap left by city, state, and federal authorities: an absence of Arabic-language election materials and interpreters in this neighborhood with thousands of LEP voters.

“One of the biggest challenges is that it’s the community that ends up having to carry the burden of providing interpretation,” said Hassan. “We can’t do it from 6 am to 9 pm.”

Arabic-speaking LEP voters were grateful that activists had found creative solutions to the lack of language accommodation, but having their language on the ballot would be much better. This year, for the first time, the New York City Mayor’s Office for Immigrant Affairs provided interpreters for six languages at 101 polling sites in Brooklyn, Queens, and Staten Island. But none were in Bay Ridge. The only pair of MOIA Arabic interpreters were stationed at a sleepy polling site in Sheepshead Bay, next to Coney Island. The state Board of Elections made them sit outside, across the street from the polling place, on a corner that most voters bypassed. Around midday, during a downpour, they were allowed to move inside.

Saadia, an Arabic-speaking LEP voter, brought her 32-year-old daughter, Fatima, to help her vote this year. Fatima, who is bilingual in Arabic and English, said she applied to be a poll worker but wasn’t selected, so the only person she was helping that day was her mother. It’s a task she’s used to, but it’s still a burden. “Any place I go, she goes,” Saadia said.

Majdamoon and Abdu Bose, a married couple, went to the polls together. Majdamoon said she didn’t vote on the ballot questions, one of which was a proposition to expand language access for LEP voters, explaining that her husband speaks better English. “It would be easier for everyone,” she said, if the elections included more languages. Many people, especially Yemeni Americans, avoid the polls because of difficulties with English. If Arabic were on the ballot, she said, switching to English, “everybody [would] come.”