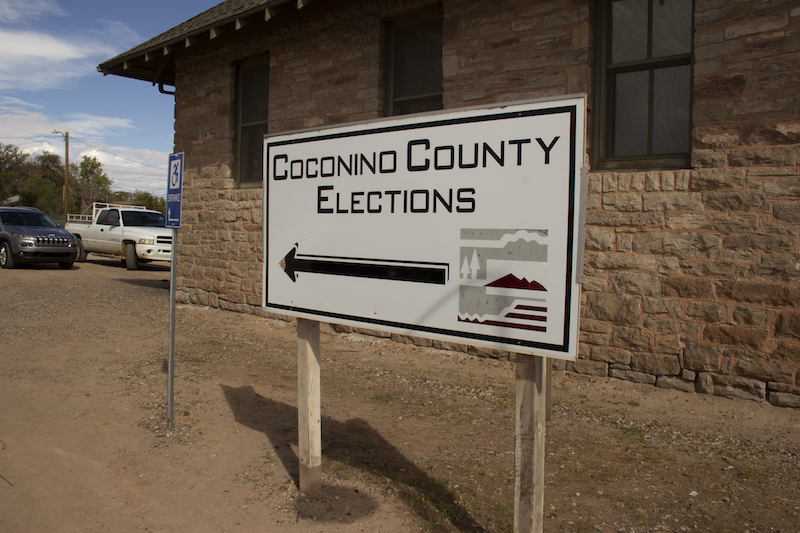 It took nearly a week after Election Day for the Senate race in Arizona between Martha McSally, R, and Kyrsten Sinema, D, to finally be called. Sinema emerged the winner, narrowing the Republicans’ hold on the Senate. The close call highlighted the importance of voters getting to the polls: On Nov. 20, the margin was a slim 1.7 percent, or 38,197 votes.

But reporters at two polls in Coconino County, Arizona, documented at least 30 voters who had difficulty figuring out where to vote on Election Day; the county had moved their polling places four months prior to the midterms. Voter Curtis Honanie arrived at the Living Christ Church in Flagstaff, Arizona, to find an empty parking lot and a small sign taped to a window informing voters that their new poll site was in the Flagstaff Mall, 1.3 miles down the road. The reason: The Living Christ Church, with its steep steps and narrow doors, was not compliant with the Americans with Disabilities Act (ADA), which prohibits discrimination against people with disabilities. Honanie, who said he received no notice about the change, felt frustrated. The county had not sent out specific notices to voters, instead relying on them to check their sample ballots for poll locations.

“I have to schedule time in my day to hit the polls,” said Honanie, a member of the Hopi Tribe. “Same with the people I work with.”

Two weeks after Election Day, the Coconino County elections office is still finalizing ballot counts. County Clerk Patty Hansen, however, will soon be looking ahead to 2020. The country’s second-largest county, Coconino sprawls over 18,000 square miles and includes the Grand Canyon as well as parts of the Navajo Nation and four other tribal nations, with a Native population of more than 27 percent. This year, a total of five polling places were moved in the Flagstaff area due to non-compliance with the ADA — and 46 more will need to be remediated before 2020.

A Department of Justice survey of polling sites from 2016 found that 46 of the county’s 65 polling sites were not in compliance with the ADA. In May, the DOJ and the county reached a settlement, agreeing that the sites were to be remediated with temporary measures such as portable ramps before this year’s midterms. Five sites that could not be upgraded had to be relocated, the farthest moving roughly 10 miles away from its original location. The rest will need to be updated before 2020. However, ADA settlements with the federal government do not provide funds, so there was no money attached to the settlement. While the upgrades would increase access for voters with disabilities, voting rights advocates worry that the process could hinder the opening of future polling locations and early voting sites that serve Indigenous communities. And if more polls are moved before the next election in 2020, it could cause confusion on a larger scale.

The frustration faced by voters like Honanie, who went to their old polling locations during the midterms, is not reassuring. While Coconino County officials mailed out sample ballots to voters that listed their new polling place addresses, a number of Living Christ Church voters did not see them.

“The truth is, I might have received something, but I didn’t look at it because I have three jobs,” said voter Maria Molina, still wearing her blue Northern Arizona University work uniform. “I don’t look at television, my mail, nothing.”

The sample ballot mailing did not include a separate notice about the change, and though some voters said they remembered receiving the ballot, they did not realize they needed to go to another location to vote. A review of Coconino County’s election site did not turn up an announcement about the changes. The official Twitter account for the Coconino County Elections Office also does not seem to have announced the closures. And an election advisory sent to at least 27 local media outlets about voter information and locations did not mention that some polling places had been moved.

“Everybody in this area that voted two years ago knows to come here,” said voter Neila Cretti, who also showed up at the church. “They should have figured out a different way to let Flagstaff voters know repeatedly that this is no longer an option — and not just this building, but all of them that they’ve closed.”

Coconino County is strongly Democratic — on tribal lands, voters are 60 percent Democrat, compared to 11 percent Republican, according to data provided by the county. The five relocated polling places were moved closer to the city center and serve 13,160 voters, including 835 Indigenous people. 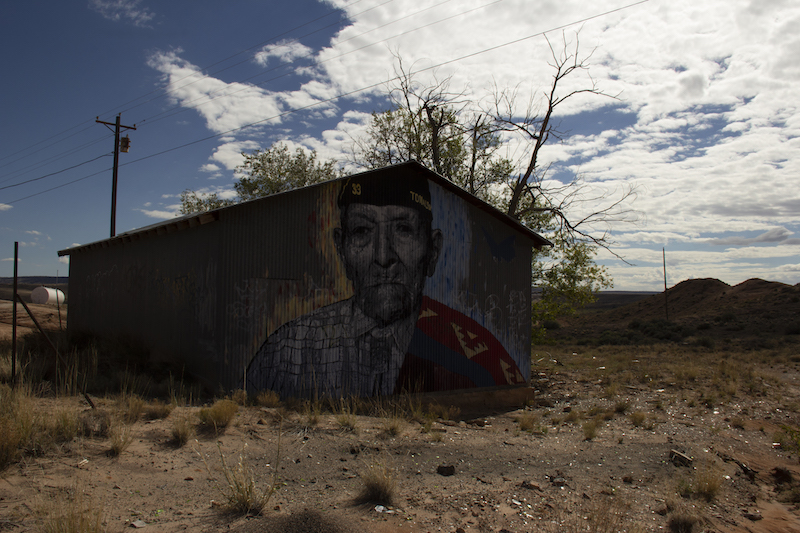 A mural of a Navajo veteran on an abandoned building in Tonalea, Arizona.Image: Jolene Nenibah Yazzie/The Investigative Fund

Of the remaining 46 polling locations in Coconino County in need of remediation, 13 are on tribal lands. If the county fails to upgrade them with a mix of temporary and permanent fixes, such as improved signage and ramps, before the 2020 election, it must provide an accessible substitute, according to a Justice Department official. That means the site will have to move to a new location.

This can get complicated on tribal lands, where few, if any, substitutes can be found. Polling locations on the Navajo Nation are commonly located in chapter houses, communal and administrative centers that often have unpaved parking lots. Many were built before the ADA became law in 1990. Navajo Nation delegate Amber Crotty worries about polling places being moved off reservation. “I heard a suggestion, ‘Well, let’s just move the polling location to, let’s say, a county building in the community,’” Crotty said. “I’m thinking in terms of my own home, that would be 15 miles away — 30 miles round trip to cast a vote.”

Coconino County Clerk Patty Hansen recognizes the potential problem, and says the county has no intention of moving polling places on tribal lands. But that could mean major investment will be required to bring buildings up to compliance for an election day that happens once every two years. The overall cost of remediation is still unknown. For example, Hansen says the county’s public facilities department estimated that repaving the county’s Tuba City elections office’s 12-by-16-foot paved parking area would cost between $10,000 and $15,000. Online estimates for ramp construction, depending on size, range from $1,000 to $2,000 each, while portable ramps can cost between $100-$200.

For now, Coconino County has no cost estimate for the project, nor does it know where the money will come from. And on the Navajo Nation where unpaved roads, rural infrastructure, and pre-ADA construction are the norm, resources can be scarce.

“There’s a lack of resources out there in tribal communities,” said Joseph Ray, a universal accessibility advocate based in Laguna Pueblo, New Mexico, who is paraplegic. “The Navajo Nation is one of the largest reservations. We’re all fighting for those federal dollars and the economic base isn’t very diverse, and all those factors weigh into why our parking lots aren’t so smooth.” 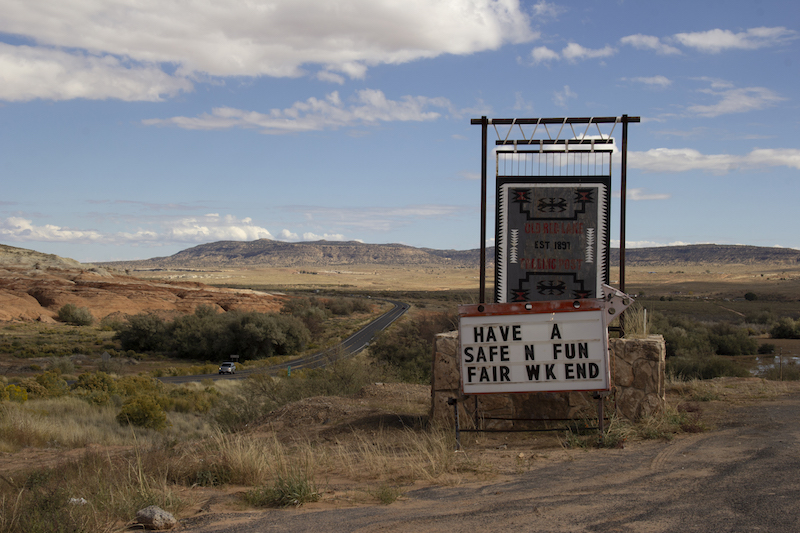 As a federal law, the ADA doesn’t apply to the Navajo Nation or the Hopi Tribe, which are sovereign nations — but it does apply to polling sites operated by the county. The Navajo Nation has slowly begun to address accessibility for tribal members with disabilities: In June, Navajo Nation President Russell Begaye set aside $470,000 for upgrades to public facilities such as chapter houses to accommodate those with disabilities. A 2013 report by the Native American Disability Law Center found that 40,000 residents on the reservation have a disability and face barriers when trying to vote. To further complicate voting in 2020, the Navajo Nation, which was not consulted for the settlement, is not required to put any money toward the Justice Department’s settlement with the county. Last week, the Nation elected a new president, current Vice President Jonathan Nez, whose administration could set the tone in negotiations with the county over polling place remediation. Hansen expects talks to begin in January.

Crotty says the process will require balance to make polling locations accessible for tribal members with disabilities, without making it more difficult for voters to cast a vote in 2020. “We don’t want anyone to not be able to vote because of restrictions of getting to the polling location,” Crotty said “What’s important to us as a nation is to continue to have that local polling place.”

This article was reported in collaboration with The Investigative Fund at The Nation Institute, now known as Type Investigations. Emery Cowan and Adrienne St. Clair contributed reporting.