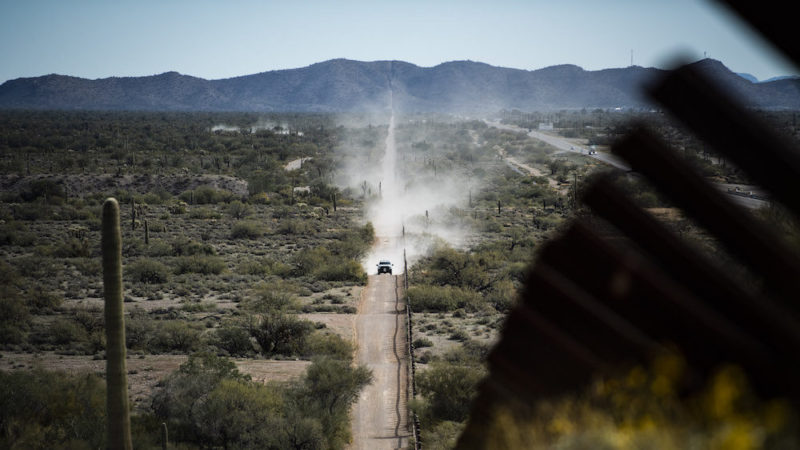 The rerouting of water around Las Playas has wiped out entire groves of mesquite trees and vegetation; birds and mammals have largely disappeared; and land that once hosted grasses and small trees is now bare.It’s an almost solemn moment: A single saguaro cactus, perhaps 10 feet tall, is ripped from the desert to make way for President Trump’s border wall. This scene was one of the many videos and photographs to emerge in late September as the Department of Homeland Security began to clear large swathes of once-protected habitat in Organ Pipe Cactus National Monument, a 517-square-mile preserve in Arizona.

Another video shows a bulldozer pushing saguaros out of the way, scraping bare the Sonoran Desert landscape. (US Customs and Border Protection said that it has relocated more than 100 cacti.) And it’s not just the plants—some older than the 82-year-old monument itself—that are being sacrificed to allow for the border wall. In order to mix cement to build the structure, DHS is also planning to pump millions of gallons of water from underground aquifers; one area of particular concern is the Quitobaquito Springs in Organ Pipe, which is home to the endangered Sonoyta mud turtle and the Quitobaquito pupfish, a species found in only one other place in the world.

Yet as shocking as the Trump administration’s most recent demolition of the desert wilderness has been, scientists and Interior Department officials say that it is just a continuation of the destruction that has been unfolding for years as US-Mexico border militarization has intensified.

Archaeologists Rick and Sandy Martynec are among those who have witnessed the erosion of environmental protections firsthand. For the past 25 years, the Martynecs, independent researchers, have been conducting archaeological surveys in Arizona along the US-Mexico border. In a roughly 20-by-20-mile stretch of desert, the husband and wife team has documented more than 600 distinct archeological sites, ranging from 10,000-year-old Paleo-Indian campsites to O’odham farming villages inhabited as recently as the 18th century.

As they’ve documented the rich historical and cultural records, the couple has seen a fragile desert ecosystem become a casualty of US border policy. About two decades ago, when the Martynecs were doing survey work in Cabeza Prieta National Wildlife Refuge at Las Playas—a series of dry lakebeds that once filled during the summer monsoon season—they frequently encountered wildlife, including coyotes, mountain lions, and more than a dozen bird species such as hummingbirds and owls. The pooling of the water in the lakebeds, which lie on both sides of the border, has sustained this unique desert environment.

But they have also observed something else: As the number of migrants coming across the border increased in the early 2000s, so too did the roads within the refuge, 90 percent of which is designated wilderness. Small, rarely used dirt tracks were becoming well-traveled multilane roads used primarily by Border Patrol agents. In the post-9/11 period, Border Patrol was granted expansive new powers and funding to police the border. In one instance, Rick Martynec measured a frequently used Border Patrol “corridor” that was at least 200 yards wide. “Until you actually see it, walk it, it just can’t be imagined,” Martynec said.

The new roads have begun to change the way water moves in this part of the Sonoran Desert. Now when seasonal rains occur, the water no longer flows into the playas but often runs in torrents along the roadways. “Almost every conceivable water source has been choked off by roads and by dams,” Martynec said.

This has had a devastating impact on the region’s ecology. Entire groves of mesquite trees and vegetation surrounding the playas have withered. The birds and mammals have largely disappeared. Martynec said that they haven’t seen a coyote out there in five or six years. The biologically complex desert soil—which was once home to ephemeral grasses and small trees and which can take decades to recover once disturbed—looks like a cracked moonscape. Around 2010, after completing their archaeological research in the region, some of it carried out on behalf of the Cabeza Prieta refuge, the Martynecs wrote a separate seven-page paper titled “The Death of Las Playas?”

Since then, the network of roads used by Border Patrol agents in Cabeza Prieta National Wildlife Refuge and neighboring Organ Pipe Cactus National Monument has only grown. A 2006 agreement between the Department of Homeland Security and land-management agencies like the National Park Service and the Bureau of Land Management gives Border Patrol the authority to use existing administrative roads and trails within wilderness areas and to travel off-road if necessary. According to current and former DOI officials, Border Patrol makes liberal use of this exemption.

“We don’t have a good way of monitoring them [Border Patrol],” one DOI employee who works in the border region told Sierra on the condition of anonymity. “For the most part, they kind of get to do whatever they want.”

And it’s not just roads that are undermining wilderness protections. DHS has installed dozens of surveillance towers along the US-Mexico border, including at least three in Cabeza Prieta.

Although Border Patrol is bound by an agreement with federal land agencies to document or report its use of wilderness areas, those figures are rarely made public. Data is shared with federal land-management agencies but is considered law-enforcement sensitive and therefore exempt from FOIA disclosure. Still, the US Fish and Wildlife Service and NPS have in recent years released some data showing that Border Patrol’s use of wilderness areas in Cabeza Prieta and Organ Pipe is extensive.

A 2011 FWS report documented nearly 8,000 miles of roads created by Border Patrol agents and smugglers within Cabeza Prieta during the previous decade (traffic by smugglers has declined dramatically since the construction of vehicle barriers along the border in 2007 and 2008). The authors, who analyzed satellite data, noted that Border Patrol was responsible for “the greater proportion” of new roads and trails, which had created a “seemingly incalculable” web across the landscape. Meanwhile, in Organ Pipe, according to a recent NPS assessment of the park’s wilderness character, Border Patrol officers reported driving almost 17,000 miles through wilderness lands in 2015 alone.

But even those figures might be vastly underestimating Border Patrol’s impact. According to Sue Rutman, a botanist who worked at Organ Pipe from 1994 to 2013, the Park Service secretly monitored Border Patrol for several years to determine if the agency was faithfully documenting off-road use of wilderness areas as required by the 2006 agreement. Rutman said a Park Service analysis found that Border Patrol only filed reports about 25 percent of the time.

“There was a total lack of respect for the park and its resources,” Rutman said.

In a written statement, Border Patrol said that several hundred miles of unauthorized vehicle routes have been created in Organ Pipe “due to cross-border illegal activities.” The agency said that it does not track the exact miles traveled by border agents in wilderness areas.

Trump’s border wall represents the latest threat to the desert wilderness. Under the 2005 Real ID Act, part of the post-9/11 expansion of the national security state, DHS was given carte blanche to waive any laws that would interfere with efforts to secure the border. This is why the Trump administration was able to sidestep dozens of environmental laws, including the Wilderness Act and the National Environmental Policy Act, to move forward with constructing a 30-foot-tall impermeable barrier in parts of Cabeza Prieta and Organ Pipe.

Martynec said that it would be difficult for him to return to Las Playas once the wall is built, part of it cutting through the site he has spent much of his life studying.

Due north of Las Playas is the Growler Valley, one of the most remote and deadly routes for migrants traveling through the desert. For the past several years, the humanitarian aid group No More Deaths has enlisted volunteers to leave water and food at various locations within the refuge.

But the Trump administration, with assistance from the Fish and Wildlife Service and other land-management agencies, has begun to crack down on their activities. At one trial, a federal judge said that the activists had undermined “the national decision to maintain the refuge in its pristine nature.” Earlier this year, four members of the group were convicted and several more currently face trial for, among other things, violating the Wilderness Act.

This article was produced in collaboration with Type Investigations.