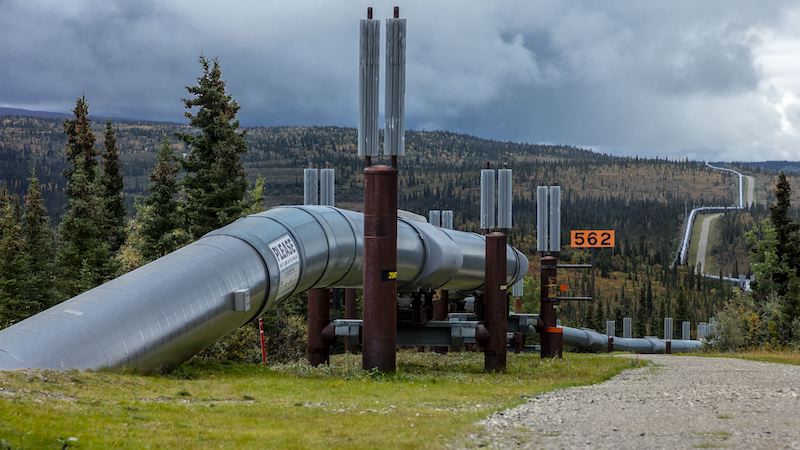 Joe Sohm/Visions of America/Universal Images Group via Getty Images
The Trans-Alaska Pipeline in 2016.

A group of US environmental activists engaged in non-violent civil disobedience targeting the oil industry have been listed in internal Department of Homeland Security documents as “extremists” and some of its members listed alongside white nationalists and mass killers, documents obtained by the Guardian reveal.

The group have been dubbed the Valve Turners, after closing the valves on pipelines in four states carrying crude oil from Canada’s tar sands on 11 October 2016 which accounted for about 15% of US daily consumption. It was described as the largest coordinated action of its kind and for a few hours the oil stopped flowing.

The five climate activists, members of Climate Direct Action, cut their way through fencing and turned the valves. The activists notified the energy companies whose pipelines were being disrupted and posted videos of their protest online and waited patiently to be arrested.

They have since been dubbed the “Valve Turners”, profiled in the New York Times magazine and featured in a recent documentary titled The Reluctant Radical. Their trials have also tested the willingness of courts to allow climate activists to make use of the necessity defense – the idea that a criminal action is justified if it helps to prevent greater future harm – as part of a legal strategy.

But the group’s actions attracted the attention of the DHS.

In a recent intelligence bulletin evaluating domestic terrorism threats between 2018 and 2020, the department included the Valve Turners and described the group as “suspected environmental rights extremists”.

The document also listed two of the group’s members alongside violent white supremacists and other extremists who have engaged in mass killings, including the man behind the racist 2015 slaying of nine black churchgoers in Charleston, South Carolina.

The document obtained by the not-for-profit Property of the People through a Foia request defines domestic terrorism as “any act of violence that is dangerous to human life or potentially destructive of critical infrastructure or key resources” and that is intended to intimidate or coerce a civilian population or government body. The assessment is directed at departmental leadership and is based on a review of roughly 80 violent incidents between 2014 and 2017, according to the document.

The document points to an uptick in “sabotage attacks” conducted by anarchist extremists, environmental rights and animal rights extremists against the Dakota Access pipeline in 2016 at the height of the pipeline protest. Nearly 800 activists have been tried on a variety of North Dakota state charges, in relation to the pipeline protests, according to Water Protector Legal Collective, a legal support organization.

In addition to providing an overview of domestic terrorism threats the document includes an appendix summarizing select incidents over the past few years. Two of the Valve Turners are listed alongside violent white supremacists such as Dylann Roof and James Fields, who have both been convicted of murdering innocent civilians. Roof killed nine black churchgoers in a rampage in South Carolina. Fields drove his car into a group of activists protesting a white supremacist rally in Charlottesville, Virginia, killing one and injuring at least 19 others.

The document also states that “racial and environmentally themed ideologies” were among the primary drivers of terrorist attacks in the United States during this time.

Mike German, a former FBI agent who is now a fellow with the Brennan Center for Justice, wrote in an email that the DHS framing was “highly misleading because white supremacists are responsible for the bulk of this violence and almost all of the fatalities that result”. “There is little evidence,” he added, “that environmentalists have engaged in the types of deadly violence that would meet the statutory definition of domestic terrorism, as codified by Congress”.

The Department of Homeland Security did not respond to multiple requests for comment.

Sam Jessup, one of the activists named in the document, said the bulletin shed light on the role law enforcement and intelligence agencies have played in suppressing dissent.

“Equating mass murder by white supremacists with what Michael and I did is totally obscene,” Jessup said in an email. “This whole infrastructure of so-called security has done little more than secure the future of the fossil fuel industry by terrorizing people into silence.”

Jessup, 34, served as a driver and videographer, live-streaming the action in North Dakota. Michael Foster, a former family therapist who lives in Seattle, turned the valve.

Foster said even though the action involved a high level of legal risk, it was a small price to pay in light of the cascading impacts of climate change.

“The only way to force society to change fast enough is to refuse to participate and fill the jails,” Foster said.

Both he and Jessup were convicted on felony conspiracy charges and Foster spent six months in jail. During closing arguments the prosecutor compared Foster to the Unabomber and the 9/11 hijackers. He is now on probation and barred from engaging in direct action protest for another two years.

In the more than three years since the action , several states have passed legislation making it a crime to trespass on property containing critical infrastructure.The Trump administration has advocated for stiffer penalties against activists who engage in non-violent direct action targeting fossil fuel infrastructure.

Carl Williams, executive director of the Water Protector Legal Collective, which has defended a number of DAPL protesters, says the push to criminalize dissent is part of a larger rightwing strategy that has also targeted the BDS movement and Black Lives Matter.

“I think there is a strategy that rightwing forces are using to criminalize dissent,” Williams said. “This bulletin shows that dirty hand.”

But Williams also says it shows that these same movements are making inroads. “Liberation movements know that this is happening and we’re fighting against it,” he said. “They’re doing this because they’re afraid of the power of these movements.”