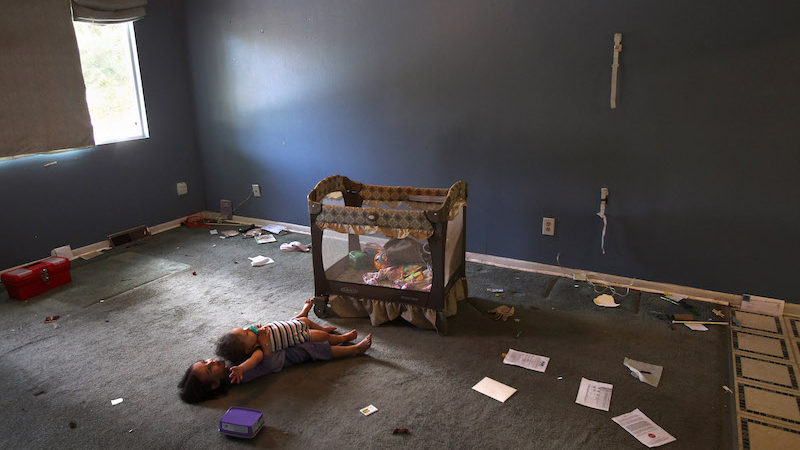 When Lillie Rodriguez received a summons to eviction court last week, she was both afraid and utterly confused. The county courthouse in Jackson, Mississippi, where she rents a single-family home, had already shut down due to the coronavirus pandemic. But the notice she received did not mention this, and ordered her to report for a hearing at 9:30 a.m. on April 2 or receive a default judgement against her.

It felt like a Catch-22. Unsure what else to do, Rodriguez began a frantic search for friends and relatives who could take her in, along with her two children. Last year, the Mississippi legislature passed a law eliminating a 10-day grace period for tenants to move out, meaning Rodriguez could be locked out immediately following her court date, whenever that happened.

“I can’t be out on the street right now,” she said.

Even under normal circumstances, renters struggle to navigate the eviction process. But in the midst of the pandemic, tenants unable to pay rent are entering into a maze of new directives from courts and state and local governments. Many of these changes have been enacted to protect people at risk of losing their housing. But some merely eliminate in-person assemblies while allowing evictions to proceed through measures like remote hearings.

In states like Mississippi, which now has the highest rate of hospitalization for COVID-19, the disease caused by the coronavirus, a growing public health crisis is compounding an ongoing eviction crisis. Jackson already had the fifth-highest eviction rate among large cities nationwide, according to data from the Princeton University Eviction Lab.

“Even prior to COVID-19, the majority of low-income people were already experiencing toxic stress and the impossible choice between basic necessities and paying their rent,” said Emily Benfer, a law professor and director of the Health Justice Advocacy Clinic at Columbia University. “The importance of preventing more evictions during a pandemic cannot be overstated.”

More than 40 states and territories have taken some sort of action to limit or stop evictions, according to Benfer, who is tracking state and local orders in a public spreadsheet.

A true moratorium on eviction, she said, would entail halting all stages of the process. But no state has done that yet, according to Benfer: Even where an eviction freeze is in place, landlords are still allowed to serve pay-or-quit notices to tenants, file new court cases against them, proceed with hearings of existing cases, or seek enforcement of past eviction orders.

And at a time when about 90% of Americans are under orders to stay at home, a few states are allowing evictions to continue unabated.

Even where they offer some protection, gaps and inconsistencies in new eviction rules are creating confusion for tenants like Rodriguez.

A lawyer for her landlord, Conrex Properties, explained that the company filed for eviction against three Jackson tenants on Friday, March 13. The following Monday, a judge’s order closed all county courts for hearings on non-emergency matters, including evictions.

But the courts and circuit clerk are still processing some matters, including the March 24 summons issued to Rodriguez and another Conrex tenant, and landlords can still serve tenants with these notices.

Roger McGehee, the lawyer for Conrex, said that even though tenants were served summons, his firm notified them by phone or mail that they wouldn’t need to appear on April 2, and that they would receive a new hearing date if they were still behind once courts reopened.

Rodriguez got an additional reprieve the morning of April 1, when Mississippi Gov. Tate Reeves (R) announced a stay-at-home order that includes a suspension of evictions. But the order only extends through April 20. So she’s in limbo, along with scores of others with open cases.

Rodriguez doesn’t know how she’ll catch up. She said she first fell behind in December, after one of her kids got sick, and her hours at work have since been cut.

Mississippi tenant advocates are urging stronger protections. “People will be in no better position to pay their rent on the 21st than they are on the first,” said John Jopling, director of the housing law program at the Mississippi Center for Justice. “If they’re getting help, it won’t be here yet, and we’ll still be in the middle of a pandemic.”

There’s one additional layer of protection that could help millions of struggling tenants: A 120-day eviction freeze, passed as part of the federal coronavirus relief package, that applies to all U.S. properties that receive federal subsidies or have federally backed mortgages.

While there’s no available figure for how many properties fall into those categories, advocates estimate that it amounts to tens of millions of rental units.

But it won’t apply to landlords like Conrex, part of a growing class of Wall Street-backed landlords that often use private equity funding to buy homes in cash. Founded in 2011, the company bought more than 500 single-family houses in Jackson to convert them to rentals. Conrex has purchased more than 9,000 homes nationwide, according to its website, “providing … investors with industry-leading yields.”

Scott Kelly, chief operations officer for Conrex, said in an email that the company froze evictions nationwide on March 10, and is waiving “late fees, offering discounts for early payment, working partial payment programs, and offering forbearance on rent in the most extreme circumstances.”

“We need our residents to pay whatever they can afford so we can continue to pay our employees, as well as other bills coming due,” said Kelly. “Much like the local restaurant can’t afford to pay their bills when they are no longer selling food, Conrex is in the same position when we are no longer collecting rent.”

A Patchwork Of Protections

In Mississippi and beyond, it’s also still unclear how courts will implement the federal eviction freeze, or how tenants will even know that they’re living in a covered property.

That’s left housing advocates and legal aid groups in many states scrambling to determine how to piece together a patchwork of protections.

In Maricopa County, Arizona, eviction filings are actually on the rise ― more than 1,000 new eviction suits were filed in county courts during the past week, according to Community Legal Services (CLS), a Phoenix-based nonprofit law firm.

Tenants who receive a court judgment against them may still have a chance to avoid an actual lock-out ― if they can inform their landlord in writing their hardship is directly related to COVID-19.

An executive order from Arizona Gov. Doug Ducey (R) instructs local constables to delay executing evictions in cases where tenants have provided their landlords with notice and any available documentation, such as a layoff notice or note from a medical provider. But that places a high burden on tenants and leaves room for wide-ranging interpretation by local judges, constables and sometimes landlords themselves, said Pamela Bridge, litigation and advocacy director for CLS.

In Maricopa County alone, 26 different justice courts are operating under 26 different administrative orders for how judges and the constables assigned to them handle evictions, according to Bridge.

She described getting a call from one tenant who had attempted to provide proof of hardship when a constable arrived at their door to carry out an eviction.

“The constable called the landlord to ask if the documentation from the tenant was enough, and the landlord said, ‘No, we want more,’” said Bridge. “Documentation’s very hard right now because employers are shut down and medical providers are stretched thin.” She is calling on the Maricopa County justice courts to suspend eviction hearings for at least 30 days.

Tenant groups in some states are calling for an even simpler solution: Suspend rent entirely during the pandemic.

‘An Avalanche Of Evictions’

Missouri is one of the few remaining states where the governor has yet to issue a statewide directive on evictions, though some counties have instituted freezes on their own.

In response, a coalition of tenant and labor unions is calling on the state to implement a comprehensive moratorium on evictions, foreclosures and utility shut-offs, and suspend rent and mortgage payments for the duration of the crisis.

“Governor Mike Parson has broad and sweeping powers under the Emergency Powers Act,” said Lee Camp, an attorney at the St. Louis-based Arch City Defenders. “He has latitude with the banks, landlords, and with tenants. With the swipe of a pen, the governor could take these actions and protect hundreds of thousands of renters across the state.”

A single mother of two, Johnson makes about $17 an hour working in a call center in Springfield, Missouri. Three weeks ago, she fell ill with coronavirus-like symptoms but was unable to get tested. With no paid sick leave, and no guarantee she’d still have a job if she self-quarantined for two weeks, she continued to go to work, wearing a mask and trying to distance herself from others in the workplace. When it became difficult to breathe, she gave up and stayed home for several days, unpaid.

Johnson’s health has recovered, but her finances haven’t. In addition to the hit she took to her paycheck this month, local school closures meant she had to enroll her two children in the only remaining open daycare nearby, at a total cost of $210 a week. While her job has now moved to telecommuting, she’s using her home internet and personal cell phone to make calls, which means she has to stay on top on those payments in order to keep working.

“I honestly don’t know what I’m going to do,” Johnson said. “I don’t have a single bill right now that I can put on the back-burner. There have been other times where the first rolls around and I have to turn to someone for help, but right now everyone’s struggling.”

Eviction hearings are currently on hold in Greene County, but Johnson worries about what will happen when they resume.

Benfer shares that concern. “When these moratoria are lifted, we’re going to have an avalanche of evictions,” she said. “Vulnerable populations are always hardest hit by disasters. It’s very important to take action now so that when society is coming back together and recovering, it’s different for them this time.”

Rebecca Burns is a Chicago-based investigative reporter and editor.