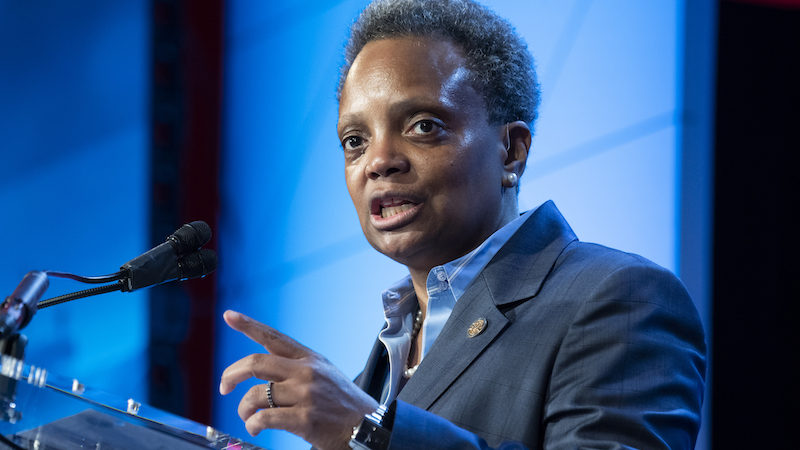 During the pandemic, the City of Chicago has quietly used a little-known state program to collect millions of dollars in unpaid tickets, court fees, ordinance violations, and other debt from residents, despite its pledges to alleviate the financial hardship many residents are facing, due to the ongoing coronavirus crisis. The program, which allows Chicago to intercept individuals’ state tax refunds, was the subject of a May investigation by The Chicago Reporter and Type Investigations.

In March, the Lightfoot administration announced it would temporarily suspend some of its debt collection efforts, along with the charging of late fees and interest. “These measures,” the city announced, “represent the first steps of the administration’s efforts to help reduce the financial impact of COVID-19 on city residents.” Residents who owed the city fines and fees for “non-public safety” violations would be granted a temporary reprieve. That reprieve ended on July 1.

Since taking office, Lightfoot has led state reforms to end the practice of suspending driver licenses for failure to pay fines and fees for most non-driving related offenses, launched an amnesty program for city sticker debt, and passed other reforms including utility bill debt forgiveness for an estimated 20,000 qualifying homeowners. As part of Lightfoot’s “Forward Together” COVID-19 recovery plan, she has also promised more flexibility for small businesses — particularly black and brown-owned businesses — when collecting fees until an effective treatment or vaccine is available.

However, according to data from the Illinois comptroller’s office obtained by The Chicago Reporter and Type Investigations, as of June 19, Chicago had intercepted $27 million from individuals’ 2020 state tax refunds — due to people who overpaid on their 2019 taxes — to collect on debt, disproportionately from lower income communities and  communities of color.

These findings come as Chicago’s finances are under significant strain. The city’s budget deficit for this year has risen to $799 million, partly as a result of the economic impacts of the pandemic, and it is facing an estimated $1.2 billion budget deficit for the 2021 fiscal year. Lightfoot has called for the federal government to provide economic relief to Chicago and other cities, but the crisis is also forcing the city to consider ways to save expenses or generate revenue — through possible furloughs or layoffs for city workers, a potential property tax, and other measures. Chicago’s budget is also constrained by state law that limits the city’s powers to raise revenue and an historic reduction in cities’s share of state income tax revenue.

Of the $27 million collected through the tax refund intercept program this year, $20.7 million has been collected from Chicago residents. Of that amount, approximately 83.8% hit residents in ZIP codes where the median household income falls below the city’s overall median household income of $55,000, according to Census Bureau data. Meanwhile, 92.6% of the money intercepted in Chicago was for residents living in predominantly non-white neighborhoods, including areas in and around South Chicago, Midway airport, West Englewood, Roseland, Marquette Park, and North Lawndale, among others. (Chicago contains a total of 58 residential ZIP codes, 57% of which are predominantly non-white.)

“This type of program is a poster child for systemic racism,” says Brent Adams, senior vice president of policy and communication for Woodstock Institute, a Chicago-based nonprofit that advocates for fines and fees reform.

City pledges to suspend claims through 2020

When Chicago started using the program in 2012, it was touted by then-Mayor Rahm Emanuel as a way to catch “those who cheat,” referring to people who don’t pay their debts to the city. Adams says this approach of taking people’s state tax refunds is counterproductive from an economic standpoint. “It’s not good for the city as a whole when you make people poorer. You make it harder for them to sustain productive lives, harder for them to stay healthy.”

“We want the program suspended in its entirety, and … all payments stopped, so that no folks have their tax refunds intercepted from this point forward,” Adams said.

A May 11 investigation by The Chicago Reporter and Type Investigations detailed Chicago’s use of the program to collect more than $103 million since 2013, and the extent to which the program disproportionately targets the city’s lower-income residents and communities of color.

After that investigation, the Lightfoot administration informed The Chicago Reporter and Type Investigations that it had suspended the tax refund intercept program until the end of the year.

“In alignment with comprehensive fines and fees reforms already taken by the Lightfoot administration and given the extraordinary economic impact of the COVID-19 pandemic, the City discontinued sending uncollected debt claims to the state’s Local Debt Recovery Program in January 2020 and will not submit any new uncollected debt claims to the state for the remainder of the year,” Kristen Cabanban, a spokesperson for the city’s Department of Finance, wrote in an email. This announcement has not previously been made public.

The new data from the Illinois comptroller’s office appears to contradict this announcement, however. When asked to clarify how the City was continuing to collect money from state tax refunds despite suspending its use of the program, Cabanban said that the money was from existing claims that were already in the state’s pipeline. The suspension, Cabanban said, would apply only to new claims that the city had not yet sent to the state.

It’s not clear that this suspension will provide any real financial relief to Chicago residents, however. According to Abdon Pallasch, the director of communications for the Illinois comptroller, cities that participate in the intercept program, including Chicago, typically submit debt claims to the comptroller once a year, in January. The comptroller then intercepts those claims as it sends out tax refunds on a rolling basis. Thus, even before the announced suspension, Chicago was unlikely to submit any new claims to the state until January 2021, after the end of the current suspension. When asked whether Chicago planned to hold off on submitting new debt claims to the state next year, Cabanban said, “The City will determine if new claims will be placed in January 2021 later this year.”

Adams said that if any outstanding claims are still due to be processed by the state as part of the tax refund intercept program, the Lightfoot administration should suspend collection of those claims. “The City should intervene on claims in the pipeline to ensure that no Chicagoans have their tax refunds intercepted during this state of unprecedented emergency,” he said. “The program is still punishing poor people if it is still processing claims.”

Under the program, Illinois residents are given 60 days to appeal the interception of their tax refunds. However, this appeal is only addressed to the state and can only determine whether or not a debt is delinquent. If the debt is delinquent, there is no recourse. A person’s economic circumstances — often the reason they haven’t been able to pay their debts in the first place — are not taken into account, unless they have declared bankruptcy. This means that if a person cannot afford to pay off their parking tickets, or if they miss a key administrative hearing, there is nothing they can do. As long as the debt is outstanding, their tax return is subject to confiscation by the city, through the state program.

After repeated inquiries by The Chicago Reporter and Type Investigations, Cabanban said that Chicago would make it possible for residents to appeal on the grounds of financial hardship. “Since the onset of COVID and in alignment with Mayor Lightfoot’s fines and fees reforms, the Department of Finance has been working with the State Comptroller on creating a process that allows Chicago residents who complete the protest process within 60 days the ability to appeal the intercept under financial hardship conditions,” Cabanban said.

Under the proposed new policy, residents would be able to mark “other” in the state appeal process to file a hardship appeal. If their appeal is approved, the debt is not forgiven, “but instead will be sent to the City and applied to the resident’s outstanding debt,” said Cabanban. Cabanban did not indicate when the new appeal option would be enacted.

Chicago is not alone; so far in 2020 the comptroller has intercepted more than $42 million from Illinois residents.

No executive action was taken to stop tax refund intercepts. The governor’s office did not respond to multiple requests for comment.

In February, Illinois State Comptroller Susana A. Mendoza stopped assisting municipalities in collecting unpaid red light camera debts. Those debts, Mendoza said, are “unfair to low-income Illinoisans.” The policy change came amidst a corruption probe into state and local officials and a private red light camera company. “The disparate impact that red-light tickets had on low-income and minority communities was a factor in our decision earlier this year to stop collecting unpaid fines from state taxpayers’ income tax refunds,” Mendoza told The Chicago Reporter and Type Investigations.

The fact that Chicago’s debt collection efforts through the tax refund intercept program continue to fall disproportionately on poor and minority communities “should give pause to policy-makers at the local and state level and should ignite a conversation about how they can make collections more fair,” she said.

This article was reported in partnership with Type Investigations. David Eads contributed analysis to this investigation.

Simon Davis-Cohen is a writer and filmmaker. He can be reached via Twitter @SimonDavisCohen.