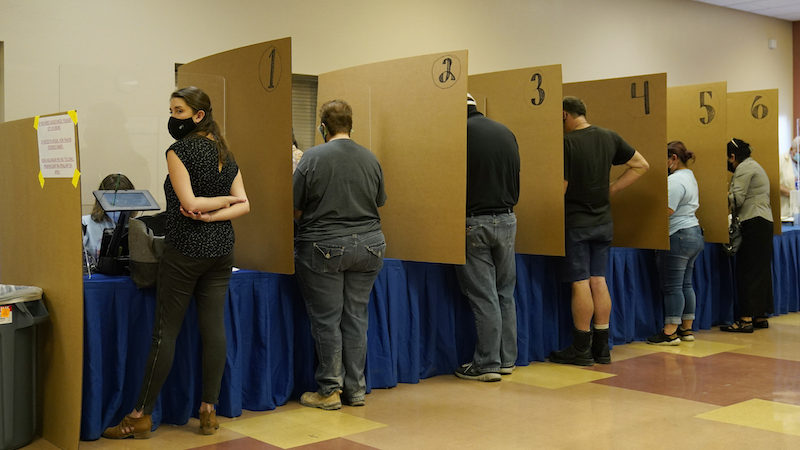 People prepare to vote at a polling place on the final day of early voting, in Las Vegas. Image: AP Photo/John Locher

In-person early voting has been hailed as a massive success, smashing turnout records across the country. With a pandemic raging and a hugely contentious election, it gave voters a way to avoid relying on the beleaguered postal system and dodge an Election Day crush. But exactly how well did it improve access to voting?

To find out where early voting did the most to increase access, Votebeat and Type Investigations tabulated the number of sites, hours, and votes for the nation’s 10 most populous counties plus New York City. Across these jurisdictions, there were huge disparities due to a number of factors, including the locations of polling places, the distribution of machines and people, and the number of hours each polling site is open.

“More hours and days and locations will increase turnout,” says Robert Stein, a political science professor at Rice University who works on elections. “No question.”

New York City, for instance, where voters could for the first time cast early ballots in a general presidential election, had 89 polling sites. But collectively, by Election Day the city offered just over 6,400 hours of early voting, even after extending hours midway through the early voting period and adding an additional polling site. That’s far less than the more than the 18,000 hours residents of Cook County, Illinois, received, or the 34,000 hours for voters in Los Angeles County. Both of those counties also had more locations than New York City, but opportunities to vote in person aren’t just a matter of the number of polling places. 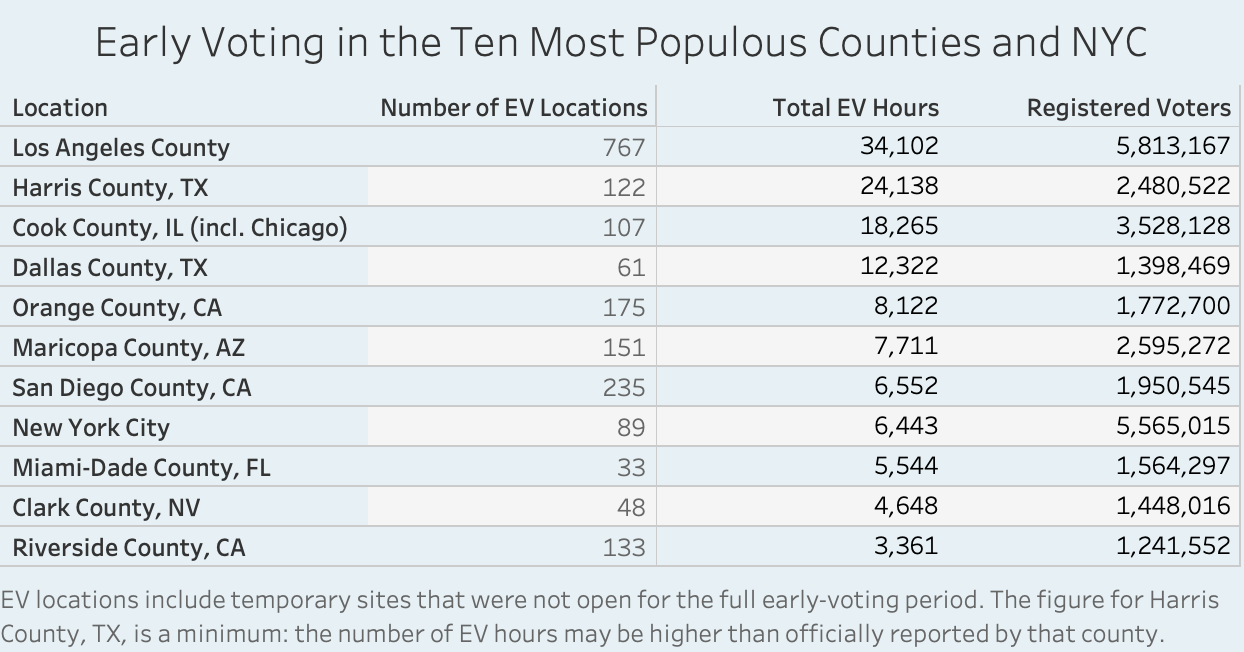 San Diego County, California, for instance, provided 235 early voting locations, while Cook County, home to Chicago had just 107. But San Diego offered only three days of early voting, and roughly a third of Cook County’s total hours to vote. Nearby Orange County, California, had 60 fewer locations than San Diego, but stayed open four days for 12 hours each, so it also bested San Diego in terms of total hours.

So it’s no surprise that the jurisdictions also varied widely in terms of total early vote count. Harris County, Texas, home to Houston, and Dallas County, Texas, had an in-person early turnout of over 50 percent of registered voters, compared to New York’s 20 percent. The Texas counties offered roughly an hour of early voting per 100 registered voters, compared to NYC’s overall average of one hour per 860 registered voters. New York offered more opportunities for voters to cast ballots ahead of Election Day than Texas — New York allowed no-excuse absentee voting, while Texas did not for people under age 65 — but Texas created more opportunities for  voting early in-person than New York.

Harris County also kept eight vote centers open for 24 hours last Thursday into Friday for voters not accommodated by the other times on offer. And Texas allowed people to vote at any polling place in their jurisdiction, while New York City required that voters go to their assigned ones.

“Part of the reason why early voting is beneficial is that it provides people the opportunity to vote at a time that accommodates their personal schedule or their work schedule,” said Sean Morales-Doyle, deputy director of the voting rights and elections program at the Brennan Center for Justice. “But if you just then have early voting during regular work hours and a bunch of other weekdays, the likelihood that you’re providing people options is not nearly as great as if you provide hours that extend beyond normal working hours.”

The hours of early voting have been a contentious political issue for years, with state legislators across the country seeking to expand or restrict the times and locations that election administrators are allowed to use. For instance, in 2011, Florida’s Republican-controlled state legislature reduced the days and hours of early voting in that state, in a move that was widely criticized by voting rights advocates as disenfranchising voters. A report by scholars at Dartmouth College and the University of Florida found that the change resulted in 225,000 fewer in-person early votes being cast in the 2012 presidential election. In 2013, then-Governor Rick Scott, a Republican who had supported the 2011 law, shifted gears and endorsed legislation to increase the early voting hours at each polling location from 96 to 168.

But the hours and number of locations are far from the only determinants of how well early voting works. Many election scholars apply queueing theory, the mathematical study of line-formation. Using surveys and other instruments, they analyze voter turnout, location, time of day, the numbers of poll workers, poll books, and voting machines, and the amount of time each transaction takes when modelling why one polling location has a smooth day of voting and another will become massively backed up.

Colin McIntyre, a researcher with the Stanford-MIT Healthy Elections Project, recently described this phenomenon on Medium. “Fundamentally, long lines are due to a mismatch between the number of voters who show up and the resources available to accommodate them,” he wrote.

In New York City and elsewhere, early voting was plagued by multi-hour lines. “There is no place in the United States of America where two, three, four hour waits to vote is acceptable,” Rep. Alexandria Ocasio-Cortez said at a press conference in late October, calling it a form of voter suppression. A landmark 2014 Presidential Commission on Election Administration report determined that no voter should wait longer than 30 minutes; anything longer is a hurdle to participation.

Morales-Doyle of the Brennan Center said this year’s voting experience could have long-lasting implications “I think that this election is sort of changing the way people think about voting in dramatic ways,” he said. “And so I think we can expect that there will be a continuing popularity and continuing demand for more, and more easily accessible, early voting, which I think is a great thing. Because the more options and the easier we make it for people to vote, the more people are going to participate in our democracy.”

Methodology note: Early voting locations and schedules come from the respective counties as of 10/28 with the exception of an update to the NYC data that occured on 10/29. Voter registration data comes from the most recent reports (as of 11/2) of the various secretaries of state. Early vote tallies come from official sources at the city, county, or state level as of 11/4/20. Cook County and the City of Chicago maintain separate boards of election — we used data from both for comparability.