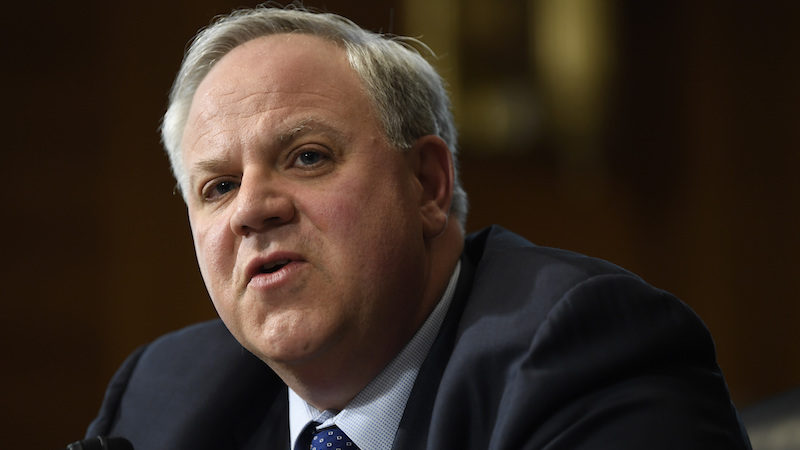 Then-Interior Secretary David Bernhardt’s memo was an eleventh-hour bid to sidestep the courts by declaring the village of King Cove an “inholding” under federal law. Image: Susan Walsh/AP Photo

Just days before leaving office, then-Interior Secretary David Bernhardt ordered federal officials to use a risky legal strategy to advance a controversial road project through a wildlife refuge in Alaska, according to a memo obtained by POLITICO and Type Investigations — a move that if implemented, could erode public land protections across the state.

The January 15 Bernhardt memo to the U.S. Fish and Wildlife Service to move forward with the permitting of a road through the Izembek National Wildlife Refuge in southwestern Alaska stunned critics who have opposed the project for more than two decades.

“To be deciding huge questions like this in the dark of night with the secretary taking the law into his own hands is totally inappropriate,” said Pat Lavin, senior policy adviser with Defenders of Wildlife, which is currently involved in litigation over the road project. “It is a kangaroo court for our public lands.”

A long-standing priority for the Alaska delegation — and Republican Sen. Lisa Murkowski in particular — the 19-mile Izembek road, which was proposed to connect the village of King Cove with an airport in nearby Cold Bay, would cut through federally designated wilderness lands in the refuge.

Supporters of the project say the road would provide residents, the majority of whom are Alaska Natives, with access to medical care in the event of an emergency; opponents argue that it would do irreparable harm to a globally recognized wetland ecosystem that provides critical habitat to thousands of migratory bird species and is really designed to benefit the commercial seafood industry. King Cove, on the remote edge of the Alaskan Peninsula, is home to one of the state’s largest canneries.

Izembek has become a litmus test for the Biden administration’s approach to land use issues in Alaska, and the Interior Department’s policy on the road is still under review. Murkowski pressed Deb Haaland at her Senate confirmation hearing to be Interior secretary on whether DOI under her leadership would continue to defend projects finalized under the previous administration. Haaland, who was sworn in as the first Native American to head the agency earlier this week, replied that she’d be willing to meet with residents of King Cove to hear from them directly.

The Izembek road is still very much in limbo. Two earlier attempts by the Trump administration to orchestrate a land exchange in order to build the road were rejected by the courts, largely because they failed to properly address a 2013 Interior Department finding that the project would irreversibly damage the refuge and was not in the public interest.

Bernhardt’s memo was an 11th hour bid to sidestep the courts by declaring the village of King Cove an “inholding” under federal law. Such a designation applies to private or state lands that are surrounded by conservation units such as refuges or parks — making them inaccessible by any other means. But King Cove, a town of just over 1,000 people, has a small airport and harbor and accommodates a large seasonal work force every year. It is also located about 20 miles from the refuge boundary, undercutting Bernhardt’s contention that it is “effectively surrounded” by protected lands or physical barriers.

If granted, inholding status would give FWS the authority to issue a right of way permit to the state of Alaska and Village of King Cove, which submitted their application to the agency in late October. Bernhardt’s memo instructed the FWS to approve the designation despite internal questions raised by the agency.

If this interpretation of the law were to be upheld by the department, it would make it easier for the state or private landowners to apply for permits to build roads through protected conservation systems, even those designated as wilderness areas.

“Bernhardt’s position is inconsistent with federal law and the well-established understanding of what ‘inholding’ means and what kind of situation properly calls for access across conservation system units to private lands,” said Lavin.

In an emailed statement, Murkowski defended Bernhardt’s action, and said his “effort to offer an additional avenue to connect the people of King Cove to the airport in Cold Bay was the right decision.”

In addition to declaring King Cove an inholding, Bernhardt unilaterally rescinded a December FWS finding, also obtained by POLITICO and Type Investigations, that the application was insufficient. Bernhardt’s memo would also allow the state to skirt stringent regulations and approvals required for road building in wilderness areas, including gravel mining in the refuge that the FWS said in its letter would not be authorized.

On the same day Bernhardt issued his memo, the FWS sent the Alaska DOT a letter informing them that the agency had “reconsidered” its earlier request for additional information — ten pages of detailed questions — and that the application was now complete.

But legal experts and some DOI employees said the last-ditch effort by Bernhardt was even less likely to succeed than the land exchange.

“We’ll lose because it’s outrageous,” one DOI employee who asked not to be identified told me. “I think it is sort of grasping at straws.”

Brook Bisson, an attorney with Trustees for Alaska, which is suing the department over the land exchange agreement, said the state’s application for the right of way permit and Bernhardt’s directive raise a number of legal questions.

“This is the most recent attempt to try to put a road through Izembek after having the land exchange for the road struck down multiple times by the court,” she said in an email. “The state is trying to use a novel legal theory instead of following the process the court said applied.”

The Army Corps of Engineers, which must also sign off on the right of way permit, appears to agree. In February, the Corps found that the state’s application was incomplete and has since closed the file, according to other documents obtained by POLITICO and Type Investigations.

A spokesperson for the Alaska Department of Transportation said it intends to carry out fieldwork this spring before resubmitting the right of way application. “We look forward to conducting environmental studies… that will allow DOT to continue working toward a road link between King Cove and the Cold Bay airport,” the department spokesperson wrote in an email.

Proponents of the road have argued for years that it is needed to link King Cove’s residents to medical facilities that they cannot reach when hazardous weather shuts its small airport and harbor. The road would give the village more reliable access to the much larger airport in Cold Bay with regular service to Anchorage.

“For decades, the people of King Cove have asked for something that the vast majority of Americans already have: access to life-saving services,” Murkowski said. “The simple solution has always been a short, gravel connector road.”

But conservation groups say the road has always been a ruse for advancing the interests of commercial fish processors, which dominate the peninsula’s economy. King Cove is almost entirely dependent on the seafood industry and road access to the Cold Bay airport would be an economic boon. Notably, though earlier versions of the land exchange proposal limited commercial use of the road, the scheme devised under the Trump administration and Bernhardt’s most recent memo largely removed those restrictions.

Although a DOI spokesperson said the administration’s policy on Izembek is not settled, the Department of Justice recently filed a legal brief in the land exchange lawsuit before the 9th Circuit Court of Appeals upholding the previous administration’s argument.

The court filing, however, does not necessarily reflect DOI policy moving forward. Still, some within the department see the decision as a sign that the administration may be willing to use Izembek as a bargaining chip.

“It really does look like this administration needs Murkowski’s support,” the DOI employee said. “So maybe it is willing to play ball on the Izembek road.”