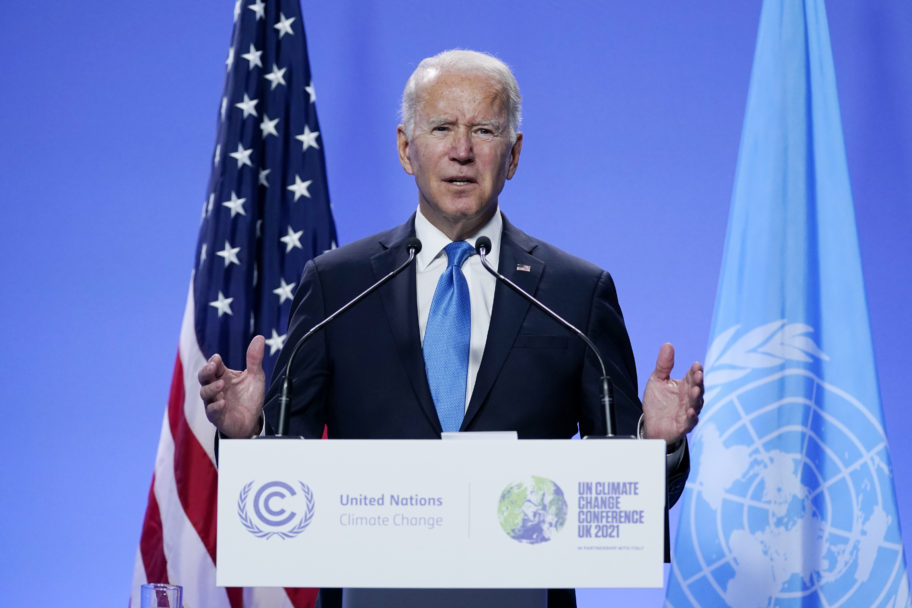 President Joe Biden speaks during a news conference at the COP26 U.N. Climate Summit, Tuesday, Nov. 2, 2021, in Glasgow, Scotland. The U.S. Interior Department on Wednesday, Nov. 17, auctioned vast oil reserves in the Gulf of Mexico estimated to hold up to 1.1 billion barrels of crude. It was the first such sale under President Biden and underscores the challenges he faces to reach climate goals that rely on cuts in fossil fuel emissions. Image: Evan Vucci/AP Photo

At the COP26 global climate summit in Glasgow, Scotland, this month, President Biden vowed to “demonstrate to the world the United States is not only back at the table but hopefully leading by the power of our example.” Yet even as Biden urged world leaders to take action to avert catastrophic warming, a key piece of his approach to the climate crisis was missing: efforts to curb the expansion of fossil fuel production on public lands in the United States.

As a candidate, Biden promised to end new oil and gas permitting and leasing on public lands and waters, which account for about 8 percent of all U.S. greenhouse gas emissions, including extraction and end use. Add coal production on federal lands to the picture, and the number rises to nearly 25 percent of all greenhouse gas emissions in the United States, according to a 2018 study by the U.S. Geological Survey. Over the past decade 23 percent of oil, gas and coal production in the US came from federal public lands and waters. By any measure, dramatically reducing fossil fuel development on these lands is central to keeping global warming below 1.5 degrees Celsius and meeting the Biden administration’s pledge to achieve a “net-zero economy” by 2050.

Early on, the Biden administration paused oil and gas leasing, pending an official review of the program, but it was sued by industry and a handful of states that argued that the decision would irreparably harm state and local economies. In June a federal court in Louisiana granted an injunction lifting the pause while the merits of the case are resolved. The administration has appealed the ruling, but lease sales have since resumed. Beyond that, the administration has largely avoided taking more aggressive action to meaningfully reduce emissions from coal, oil and gas development on public lands. (A spokesperson for the Interior Department, which oversees energy development on public lands, defended the department’s record and said it has been “reviewing and reforming its leasing procedures,” while making it easier for tribes and the public to comment on proposed projects.)

Between Jan. 20 and Oct. 31, the Bureau of Land Management approved 3,091 new onshore drilling permits — permits it could have deferred or on which it could have imposed more rigorous restrictions. That’s an average of 332 per month, according to the agency’s data, surpassing the number of approvals in the last three years of the Trump administration. Moreover, the agency has renewed the leases of 18 coal mines this year, allowing operations to continue for at least another decade, while granting 13 requests to reduce the royalty fees that coal mines pay the federal government to operate on public lands, which environmentalists view as an unnecessary subsidy helping to keep the industry afloat. The Bureau of Land Management has also “initially denied” requests for royalty rate reductions on 14 other coal leases, according to an agency spokesperson, and final decisions will be made after conferring with governors in those states. The agency declined to comment on why it renewed the 18 coal leases.

The fact that the Biden administration has largely encouraged, rather than curbed, fossil fuel development on public lands is surprising, environmental lawyers and policy experts say, because this is one area where the White House has unique leverage. Just as the Trump administration used the Interior Department to advance its “energy dominance” agenda, many in the environmental community believe that the department can act unilaterally to unwind coal, oil and gas production on federal lands. Some policy experts say the government even has a legal obligation to do so.

Indeed, the Biden administration’s power over fossil fuel production on public lands is vast. According to federal statutes, the Interior Department can impose restrictions on new drilling permits, including limits on future greenhouse gas emissions, or defer action. It can also significantly scale back the amount of acreage offered in lease sales by factoring in climate impacts and the social cost of carbon, which the administration says it is beginning to do.

John Leshy, who served as the department’s solicitor under President Bill Clinton and has written on Interior’s authority to curb fossil fuel leasing, said that if the agency wanted to stop all offshore sales, there is “a clear path” to do it. He also pointed out that the interior secretary, under a variety of laws including the 1987 Federal Onshore Oil and Gas Leasing Reform Act, can declare lands ineligible for leasing while the department considers the larger climate impacts of the program. “They can ultimately get to the point of no new leases,” Leshy said. “But it could take some time.”

In addition, when the government does approve new permits for oil and gas drilling, it has the power to impose restrictions — known as conditions of approval — on new development. “There’s pretty broad discretion there to impose any reasonable conditions to protect the environment,” said Mark Squillace, a professor at the University of Colorado at Boulder who specializes in mining law. This could take the form of placing a cap on future production to reduce emissions over time.

Yet according to the Interior Department spokesperson, the agency has not imposed any greenhouse gas mitigation requirements on the more than 3,000 permits approved since Biden took office. The department declined to comment on whether it will do so in the future.

Kyle Tisdel, a lawyer with the Western Environmental Law Center, says the department can go further and defer action on permitting altogether under a statute known as Onshore Order No. 1. According to the regulation, the Bureau of Land Management has 30 days to respond to an applicant and can “notify the operator that it is deferring action on the permit.” This would allow the administration to delay the approval of new drilling permits while it determines next steps in the broader oil and gas leasing program.

Given these broad powers, the administration’s failure to use measures to limit new drilling or future emissions has been particularly disappointing, critics say. One major sticking point is a delay in the administration’s much-anticipated review of the oil and gas leasing program, which the Interior Department initially said would be released in “early summer” and serve as a blueprint for reforms. The department spokesperson said the report is currently under interagency review, and the White House did not respond to requests for comment. But according to two sources familiar with the department’s strategy, who spoke on the condition of anonymity because they were not authorized to discuss it on the record, the document has been held up by the White House pending congressional passage of the reconciliation bill, whose fate remains uncertain.

The Interior Department did not respond to questions about the publication of the oil and gas leasing report. At a news conference in Glasgow, however, Secretary Deb Haaland said the delay is not hindering the department’s progress, and that it is analyzing new leases with an eye toward climate change impacts and the social cost of carbon. “We are making a lot of changes now even without the report,” Haaland told reporters. “We know what needs to happen.”

When it comes to coal leasing and production, the department has restarted a review of the program — initiated under the Obama administration in early 2016 — but it’s unclear when that will be completed. Meanwhile the department could choose not to extend existing leases, which come up for renewal every 10 or 20 years. Putting aside the 18 leases it has already renewed, the Biden administration has the opportunity to phase out another 86 during the next three years — which Nat Shoaff, a lawyer with the Sierra Club, described as “low-hanging fruit.” The law gives the Bureau of Land Management the authority to not renew them if it deems the action to be in the “public interest.”

The administration is also considering whether to allow the expansion of two major coal mines, the Alton mine in Utah and the Spring Creek mine in Montana, and is moving forward with on- and offshore oil and gas lease sales scheduled for next year.

When Haaland arrived in Glasgow for the climate summit, protesters demanding an end to new leasing and development on federal lands were there to greet her. It was a direct response to the largest-ever offshore-lease sale in the Gulf of Mexico, planned for Nov. 17, five days after the end of the summit. Despite the court order overturning the pause on leasing, the administration could have delayed the sale and significantly reduced the amount of acreage on offer under the Outer Continental Shelf Lands Act, according to a lawsuit filed by four environmental organizations that asked the administration to conduct a new environmental analysis.

Leshy says the Biden administration has been “hamstrung” by the Louisiana court ruling and still has time to follow through on its campaign promises. But others say Biden’s first year in office has been a squandered opportunity.

“There’s a lot of rhetoric from this administration about the need to take action on climate,” Tisdel said. “But not only is the administration not doing everything it could — it’s not doing anything, really.”